(Seoul = Yonhap News) Reporter Eom Nam-seok = ‘Red Planet’ Mars is a cold and barren place where you can’t find a drop of water on its surface, but it is said that billions of years ago, it had oceans, lakes and rivers just like Earth. It is presumed that much of the water escaped into space through the atmosphere, and small local dust storms have also been proven to play a role in this evaporation.

According to the National Aeronautics and Space Administration (NASA) Goddard Space Flight Center, an international team of researchers led by Michael Chapin, a researcher at the University of Colorado’s Atmospheric and Space Physics Laboratory in Boulder, is based on observations collected simultaneously by three satellites orbiting Mars. A study proving the contribution of this water evaporation was published in the scientific journal Nature Astronomy.

Dust storms on Mars heat the cold upper atmosphere, causing water vapor to rise higher without freezing. Here, water molecules (H₂O) are exposed to ultraviolet radiation as they are and are separated into hydrogen (H) and oxygen (O) atoms, and hydrogen, the lightest element, escapes into space first and loses water.

Scientists have hypothesized that this process may have caused the Martian water to evaporate as large dust storms sweeping across the planet every three to four years Mars time, combined with summer in the southern hemisphere, when Mars gets closer to the Sun.

But it was not known whether localized small dust storms, which occur almost every summer in the Southern Hemisphere, play a role.

Using satellite data, the team found that small, localized dust storms in the southern hemisphere in summer doubled the amount of water loss compared to otherwise. 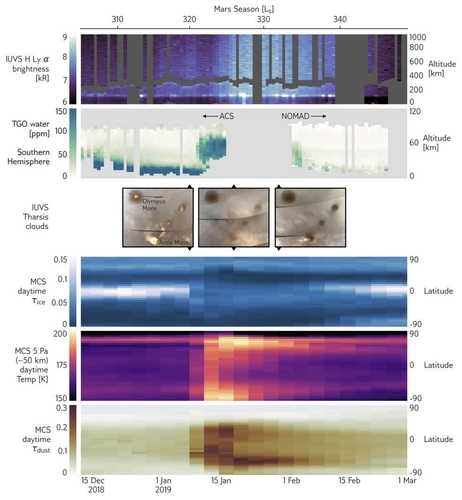 TGO observatories captured ten times as much water in the mid-altitude atmosphere as the dust storm began, exactly consistent with temperature data measured by the MRO’s infrared radiometer. The radiometer showed that the temperature rose as the dust flew high.

Maven images show that ice clouds formed over Tharsis before the dust storm, but disappeared completely during the dust storm and re-formed after the storm was over.

Maven observations also confirmed that at higher altitudes, water molecules break down into hydrogen and oxygen atoms, resulting in a 50% increase in hydrogen.

Researcher Chapin said, “Without one hydrogen atom, the remaining hydrogen and oxygen cannot become water molecules, so water can be lost forever with just one hydrogen atom.” For the first time, he said, “I got a grip on how the whole system works.”

I’ve been sleeping since I bought this thing. We can’t see stars in Istanbul.

Activision Blizzard is plagued by scandals such as...