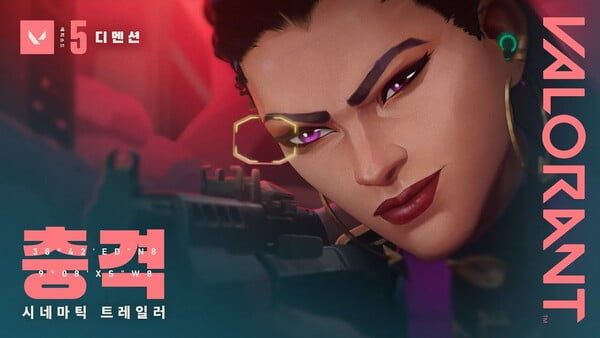 Riot Games announced on the 23rd that the fifth episode ‘Dimension’ will be released on FPS Valorant. New skins, maps, and battle passes will be added, and a unique in-game event called ‘Crossover’ will be held.

Riot Games explained that the new ‘Chaos Prelude’ skin series started with the question, “If you are a dark follower who likes science fiction, what would you put in your skin? How would it feel to defeat the devil?” Riot Games’ Pretty Canola Producer emphasized, “The sound of the operator using the Chaos Prelude skin is so heavy that it feels like an adrenaline rush every time.”

The Chaos Prelude skin has different effects depending on the level. A two-handed sword equipped with the Chaos Prelude skin is added to ▲Standby ▲Equip ▲Learn more ▲Slash, along with ‘Custom Visual Effect’ and ‘Audio’ from level 2. From level 2, ‘custom muzzle flash effect’ and ‘shot sound’ are applied to guns, and at level 3, ‘custom visual effects’ and ‘audio’ are added to ‘reload’ in addition to ▲standby ▲equip ▲details. becomes ‘Unique Kill Banner’ and ‘Finish’ are applied at 4th level.

The underwater city ‘Pearl’ is Valorant’s eighth new map, and for the first time in Valorant’s history, another world in the game, ‘Omega Earth’, is the background. Pearl does not have teleporters and rope ladders, and has a small center and three long lanes on the sides, so active engagement is expected to be an important map. Compared to the existing Valorant map, it is intuitive and simple in shape, so it is expected to lower the barrier to entry for players who have difficulty with the new map.

The Battle Pass is also updated. The Battle Pass includes a lot of skins that can give players a sense of conquest, such as the shiny skin series ‘Seamer Classic’ and the tactical and clean ‘Task Force 809’. In addition, various decorative elements such as ‘Striking Strike Player Card’, ‘Required lower body exercise spray’, and ‘Cat tactical gun decoration’ will be added.

To commemorate the update, a ‘Crossover Pass Event’ will also be held. The ‘Comic Book Store’, which appeared in the episode 5 cinematic ‘Shock’, can be found in the in-game new map Pearl, and you can also use comic book-themed player cards created by groups of celebrities and artists in the industry. The Crossover Pass event is free for three weeks from June 23rd to July 14th.