Samsung succumbed to error, and kt overcame it.

The match between KT Wiz and Samsung Lions in the first place match of the Pro Baseball 2021 Shinhan Bank SOL KBO regular season held at Samsung Lions Park in Daegu on the afternoon of the 31st. At the beginning of the 6th inning, 2-4 runners 1st and 3rd base, kt Baekho Kang hit a one-point timely hit. yunhap news
‘2021 Shinhan Bank SOL KBO League’ Samsung-kt 1st place tiebreaker match was held at Daegu Samsung Lions Park on the 31st. The two teams tied for first place with 76 wins, 59 losses and 9 draws until the final day of the regular season, making it their first tie-breaker in 35 years.

Moreover, Samsung has a good memory of breaking kt at home on the 22nd and 23rd. Here, Samsung was able to overtake kt and rise to the top spot.

Conversely, kt allowed a tie for first place after running 6 games behind at one time in the season. Psychologically, it would be even more disappointing to be in second place. Manager Lee Kang-cheol also looked back before the match, saying, “I thought I might try (tie breaker) at the end of the season when (team performance) wasn’t good, but I’ve come this far.”

Due to the burden of the away game, there was relatively little rest. KT, which played the previous day against SSG and Incheon, had a longer travel distance than Samsung, which played NC and Changwon. Samsung director Heo Sam-young said, “I arrived home before 11 o’clock and slept well.” Director Lee said, “I came to Daegu after 1:30 in the morning,” he said.

As for the starting pitcher card, Samsung was expected to have the upper hand. Won Tae-in rested well after the home match against kt on the 22nd, and his record against the team was also 2 wins and an undefeated ERA (ERA) of 1.26. kt Cuevas also had a strong ERA of 2.97 in 5 games against Samsung this year, but on the 27th, after throwing 108 balls in 7 innings and 2 runs in the second game of the double header against NC on the 27th, he took a two-day break.

However, Samsung had some apprehension. Second baseman Kim Sang-soo missed out from the starting lineup due to a left shoulder pain while defending the previous day. Instead, Kim Ji-chan took second base and Oh Seon-jin entered shortstop.

The match between KT Wiz and Samsung Lions in the first place match of the Pro Baseball 2021 Shinhan Bank SOL KBO regular season held at Samsung Lions Park in Daegu on the afternoon of the 31st. In the early 5th inning, Samsung starting pitcher Won Tae-in finished the inning without a score and clenched his fists. yunhap news
Samsung seemed to have an advantage, but the ball was round. The game did not go as expected. Samsung could not make use of an opportunity amidst a bit of anxiety in an advantageous situation, and kt, in an unfavorable situation, showed a fighting spirit and did not miss the opponent’s mistakes.

It was tight until the 5th. Won Tae-in fought like a kt nemesis. He showed off his no-hitter pitching, striking out six up to the fifth inning and giving only one walk.

However, he was slightly shaken by the poor defense in the 6th inning. Shortstop Oh Seon-jin, who caught the slow hit of KT 9th hitter Shim Woo-jun, missed the running ball and made one company and second base. Since Shim Woo-jun, who is quick-witted, even tried to slide the head first, Oh Seon-jin’s heart was urgent. The record was infield hits and throwing errors.

Won Tae-in couldn’t surpass Hwang Jae-gyun and Kang Baek-ho at first and third base. At the end of the full count match with Hwang Jae-gyun, the outside ball fell out one after another and he gave up a walk, and with Kang Baek-ho, the second low fastball became the ball, and he was pushed back in the count fight. In the end, Kang Baek-ho did not miss the fastball that went in to catch the strike and made it a left-handed hit and took the lead.

Tae-in Won played a strong fastball with a maximum speed of 149km and played 6 innings, 8 strikeouts, 2 hits, 2 walks, and 1 run (visa fault). However, in the 6th inning, the defense failed to prevent a goal. 98 back fights that lost their light.

On the other hand, kt managed to overcome the crisis caused by mistakes. Cuevas, who was also on the mound in the 7th inning, seemed to catch Jae-il Oh with a ball in the outfield after walking the lead Ja-wook Koo. However, right fielder Ho Ying made a catch error, and first base runner Ja-wook Koo ran to third base. However, it was fortunate for KT that Oh Jae-il got caught in a convoy and died while running to second base.

KT Bench practically skipped Pirella, the 4th hitter who hit a two-run home run the day before, and chose to play against Kang Min-ho, who ended up with no hits in five at-bats. In 1 company 1st and 3rd base, Kang Min-ho left a disappointment as he only flew a ball at 2nd base. To make matters worse for Samsung, even Lee Won-seok stepped down from 2nd and 3rd base and struck the ground with a bat. It was the biggest match of the day. 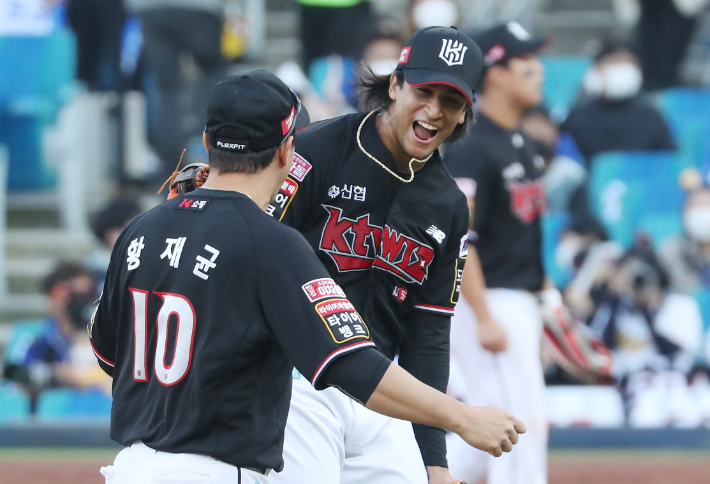 The match between KT Wiz and Samsung Lions in the first place match of the Pro Baseball 2021 Shinhan Bank SOL KBO regular season held at Samsung Lions Park in Daegu on the afternoon of the 31st. At the end of the 7th inning, kt starting pitcher Cuevas is happy to finish the inning without a score. yunhap news

Samsung also missed the opportunity to take the lead in the bottom of the first inning. After Park Hae-min, the leader, walked on base, he ran to second base in a full-count game when Oh Jae-il was at bat in the first company. However, Jae-il Oh was struck out looking while watching Cuevas’ curve, and even Park Hae-min died a double out. In the eighth inning, Seon-Jin Oh and Hae-Min Park only batted one after another at first base in the eighth inning.

In the end, Samsung suffered a 0–1 victory without overcoming a goal due to an error. Unfortunately, in front of 12,244 home spectators, he failed to celebrate his first regular league championship in six years. However, they had to be content with the first fall baseball being held at Lions Park, which opened in 2016, as the first and third games of the playoffs (PO), which went straight to second place in the regular league, were played at home.

Conversely, overcoming disadvantages and crises, kt proved its qualifications as the first regular league championship team. Cuevas had a maximum speed of 151km in 7 innings and threw 99 balls, striking out 8, hitting 1 hit, 3 4 4, and leading the victory. It was a thrilling victory thanks to the fighting spirit of the players, such as Super Kang-soo, who finished Kim Jae-yoon at first base in the 8th inning, and Park Kyung-soo, 2nd baseman in the 9th.

kt went directly to the Korea Series (KS), which will be held from the 14th, and also made its first KS entry. This year’s postseason kicks off with a wild card match between Doosan and Kiwoom, ranked 4th and 5th in the regular league, on the 1st.