Hyundai Motor Company and Kia Motors achieved ‘surprising results (earnings surprise)’ in the second quarter of this year despite the ‘semiconductor supply and demand shortage’. This is thanks to the strong performance in overseas markets such as the United States and Europe, which were sluggish due to the global pandemic (pandemic) of the novel coronavirus infection (COVID-19) in the second quarter of last year. 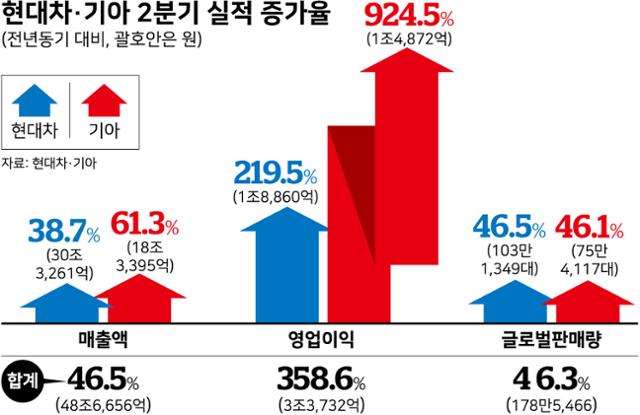 Hyundai Motor and Kia’s record-high 2Q earnings were driven by a surge in overseas sales. In the second quarter of last year, overseas sales such as Europe, the United States, and India plunged due to the severe aftermath of COVID-19. However, in the second quarter of this year, the market showed a recovery trend thanks to strong economic stimulus measures by governments and expansion of vaccinations. In such a situation, Hyundai Motor and Kia introduced a large number of new cars such as the GV80, Ioniq 5, Sorento, and Carnival, showing high growth of 73.6% and 70.9%, respectively.

However, both companies expressed concern about the business situation after the third quarter. This is because the shortage of semiconductors for vehicles is longer than expected, and the re-spreading of COVID-19 caused by a mutant virus is not serious. In addition, the sharp rise in raw material prices recently is a burdensome factor. In particular, to improve semiconductor supply and demand, Hyundai Motor Company and Kia are △Promoting additional supply by mobilizing company-wide capabilities △Preemptively securing inventory through annual orders △Promoting partnerships with major semiconductor companies △Continuing discovery of alternative devices △Diversifying suppliers to produce in the second half of the year We plan to pursue an increase.

Seo Kang-hyeon, head of Hyundai Motor’s finance division (Vice President) said, “Semiconductor supply and demand is expected to gradually improve from the third quarter, but we have completed orders until next year to stabilize long-term supply.” We plan to increase the stockpiling rate and establish inventory stockpiling standards that match the characteristics of each region and item to stockpile the largest stock.”

[단독] “Extension of 4 steps for 2 more weeks, some rules strengthened”… Announced on the 23rd

Xiaomi’s 200W fast charger may actually be used next year

signs of recovery… Bitcoin mining recovers to the...

Which cafe has the highest number of violations...

Will electricity rates go up after Chuseok holidays…...

Analyze the working principle behind the “how...

February 23, 2021
We use cookies on our website to give you the most relevant experience by remembering your preferences and repeat visits. By clicking “Accept All”, you consent to the use of ALL the cookies. However, you may visit "Cookie Settings" to provide a controlled consent.
Cookie SettingsAccept All
Manage consent