Solar activity is the cause of space weather? 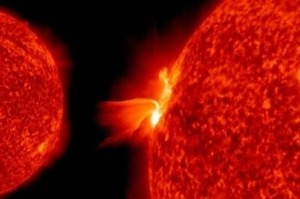 The Korean launch vehicle Nuri, which has been delayed twice due to space weather and component defects (abnormal signal from the level sensor of the first stage oxidizer tank), will retry its second launch from the Naro Space Center in Goheung-gun, Jeollanam-do on the afternoon of the 21st. The actual launch time of the Nuri is finally determined according to various space environmental conditions, such as a sunspot explosion and the possibility of colliding with space objects (manned spacecraft). Taking the Nuri launch as an opportunity, let’s learn about space weather, the solar wind (solar storm) closely related to this weather, and major solar activities that affect the space environment.

What is the space propagation environment?

In space, changes in Earth’s weather, such as rain or snow, do not occur. Unlike Earth, it is a vacuum without air. However, due to the activity of the sun, the environment around the earth is constantly changing. These changes that affect the Earth and its surroundings are called ‘space propagation environment’. In other words, the cause of cosmic weather is the solar activity and the resulting change in the outer space around the Earth.
You can apply for the space radio environment warning notification service at the Space Radio Center website (spaceweather.rra.go.kr).

the sun threatens the earth

The sun is the largest celestial body in the solar system. It is large enough to accommodate about 1.3 million Earths. As the center of the solar system, it provides light, heat, and other energy to the earth so that various living things can live on the earth. On the other hand, it also emits something harmful, such as cosmic rays (radiation and particles). Violent explosions occur frequently in the sun. Although it is 150 million km away from Earth, in severe cases, a large amount of spacecraft reaches the Earth and threatens us.

A solar storm is a phenomenon in which sunspots explode and high-energy plasma particles from the surface are released into space. The gaseous sun is too hot to form atoms and separates into nuclei and electrons, each with an anode and a cathode. This is called the ‘plasma state’. In other words, the material that makes up the interior of the sun exists in a plasma state. These plasma particles, which have electrical properties, follow the magnetic field and spread throughout the sun. This phenomenon is called ‘solar wind’. And the more active the sun, the stronger it gets.

One of the representative activities that the sun affects on the earth is ‘sunspots’. It is literally a black spot on the surface of the sun. A strong magnetic field is generated here. It is known that the more sunspots there are, the more active the solar activity is. The black appearance is because the temperature is a little lower than the other parts. But it is still over 4000℃. This sunspot is important because it is where the solar explosion occurs. In this case, high-energy radio waves and particles are emitted all at once and reach the Earth. According to the National Aeronautics and Space Administration, in July 2025, there will be a ‘sunspot maximum (11-year cycle)’, when about 200 sunspots can be seen on the surface of the sun. Although it is only a small dot in the sun, it is 16,000 km in diameter, which is more than enough to contain the Earth.

The sun’s surface appears to explode periodically. A phenomenon in which a large amount of energy is emitted is called a ‘flare (solar explosion)’. At this time, it releases a tremendous amount of energy equivalent to 10 million hydrogen bombs. When flares occur, the Earth’s magnetic field changes irregularly, creating geomagnetic storms. In addition, communication using radio waves such as telephone or broadcasting may become impossible.
Solar flares are broadly classified into C, M, and X depending on the brightness of the X-ray wavelength measured by satellites around the Earth. And each grade is further subdivided into grades 1 to 9. Class X is strong enough to affect space weather around Earth. ‘Corona material (mass) emission’ is a phenomenon in which an enormous amount of matter is ejected from the sun’s corona at once. A region of the atmosphere located outside the Sun, when these materials are blown toward the Earth, geomagnetic storms occur. If this happens, communication with the earth is cut off or the satellites are broken. Even in the field of aviation, there may be errors in the communication system.

Earth has a shield that blocks the solar wind. That’s the Earth’s magnetic field. Since the north and south poles act as the cathode and anode of a magnet, the Earth is surrounded by a large magnetic field. As a result, plasma particles emitted from the sun cannot enter Earth and flow around the magnetic field.