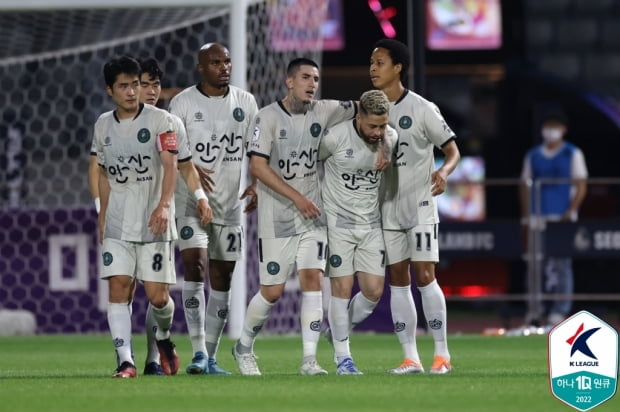 The professional soccer K League 2 Ansan Greeners got their first consecutive win of the season and broke the chain of 7 matches against Seoul E-Land and came out of the bottom.

Ansan won the Hana OneQ K League 2 2022 round 22nd round E-Land in an away match at the Mokdong Sports Complex in Seoul on the 22nd and won 3-2 after a melee game.

Song Jin-gyu, in his 4th year as a professional, scored two goals, including his K-League debut, in the first half alone, and Duarte scored the winning goal in the 32nd minute of a 2-2 match, leading Ansan to victory.

After the 3-0 win over Bucheon FC on the 13th, Ansan, who enjoyed the joy of their first consecutive win this season, accumulated 17 points (3 wins, 8 draws and 9 losses), and bottomed out at Busan I’Park (15 points, 3 wins, 6 draws and 11 losses). He pulled down and succeeded in escaping last place (11th).

In particular, against E-Land, it was meaningful since August 2020, winning the first 8 matches after 2 draws and 5 losses.

On the other hand, E-Land remained in 7th place with 22 points (4 wins, 10 draws and 6 losses) after continuing sluggishness with a draw (5 draws and 2 losses) in the last 7 matches.

It was Song Jin-gyu’s first goal in his K-League career, who made his professional debut with Suwon Samsung in the K League 1 in 2019.

Ansan’s lead was suspended in the 25th minute of the first half.

E-Land Kim Jeong-hwan crossed from the left inside the opponent’s penalty area, and Tsubasa finished with his right foot from the right of the goal.

Jinkyu Song, who broke the opponent’s defense with a 2-1 pass with Lee Sang-min and dug into the right side of the goal area, shook the E-Land net once more with a right-footed shot to finish the first half with Ansan holding the lead 2-1.

In the 27th minute of the second half, E-Land returned to balance with Seo Jae-min’s cross headed by Kadenasi.

Then, in the 32nd minute of the second half, Duarte, who received a pass from Cañotou, bounced off the net with a left-footed shot from the left side of the goal to divide the game.

Duarte, who played for E-Land in the 2019 season, put a dagger in his former team.

FC Anyang won 1-0 in the away match against Bucheon FC by keeping Jonathan’s winning goal 9 minutes after kick-off to the end.

Jonathan slipped the ball into the right inside the penalty area after Acosti stabbed it near the half line and finished with a right footed shot.

At Jinju Stadium, Gyeongnam FC and Chungnam Asan could not decide the match 0-0. ‘Doctor Opas’ warns that this year, the whole year there will be a ripple of children of ‘Omicron’. The virus will pick up people who haven’t been infected.
Posted onJune 29, 2022June 29, 2022
Menu