Democratic Party leader Song Young-gil speaks at the top of the National Assembly on the 4th. Reporter Im Hyun-dong

Song Young-gil, chairman of the Democratic Party of Korea, has been embroiled in controversy over his remarks to the effect of “opening a McDonald’s in the Kaesong Industrial Complex.”

Representative Song attended the Aspen Security Forum in the United States on the 4th (Korean time) via video and said, “It is a joint South Korea-US exercise to keep peace and establish readiness, but North Korea does not believe our claims.” “If ‘McDonald’ If North Korea opens a branch in the Kaesong Industrial Complex, North Korea will also accept that the exercise is a defensive military exercise.”

“Due to the worsening economic situation, North Korea can take out a provocation card at any time,” Song continued. Humanitarian aid should be considered as soon as possible,” he said. This is a mitigation measure proposed as tensions between the two Koreas grew as tensions between the two Koreas grew, calling for a halt to the North Korean Workers’ Party’s Vice-Chairman Kim Yeo-jung ahead of the South Korea-US joint drill scheduled for this month.

However, on the 2nd, at the highest level, CEO Song insisted on the ‘inevitability’, saying, “The training has no choice but to proceed as scheduled.” Within the party, the reaction was that “a person who said to do training insists on reopening the Kaesong Industrial Complex” (a party official from the Democratic Party). 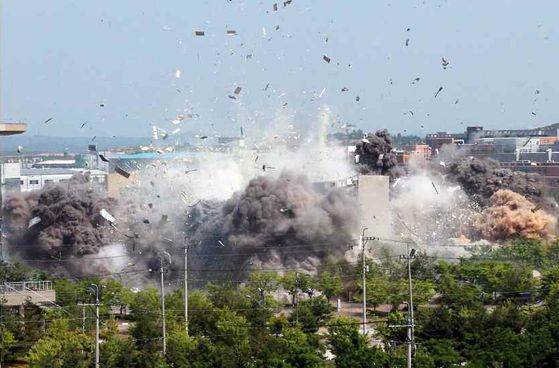 A photo of the bombing of the inter-Korean liaison office in Kaesong released in June last year by the Rodong Sinmun, the official newspaper of the North Korean Workers’ Party. News 1

CEO Song’s ‘advance speech’ has continued since his inauguration (last May). On the 28th of last month, he sparked a controversy over ‘breaking the confidentiality agreement with pharmaceutical companies’ by saying, “It started talking about receiving about 1.3 million to 1.4 million doses next week.” In May, some pointed out that the Moon Jae-in administration’s public-led rental housing policy put a burden on the government by arguing, “Public rental housing can be purchased temporarily when there is no money, but who will buy it if you ask it to live the rest of your life?”

There were also a lot of ‘misleading’. In May, the geese couple was criticized for remarking, “Some people have husbands who died alone while drinking, and there are places where women have broken homes because of an affair.”

A member of the Democratic Party’s leadership said, “CEO Song lacks political sensibility. I feel a sense of responsibility for the advice around me, so I will give you false words.”

Woman was hit and asked to apologize, and...

“Not that cat”… Attorney who’transformed’ during a...

September 12, 2021
We use cookies on our website to give you the most relevant experience by remembering your preferences and repeat visits. By clicking “Accept All”, you consent to the use of ALL the cookies. However, you may visit "Cookie Settings" to provide a controlled consent.
Cookie SettingsAccept All
Manage consent