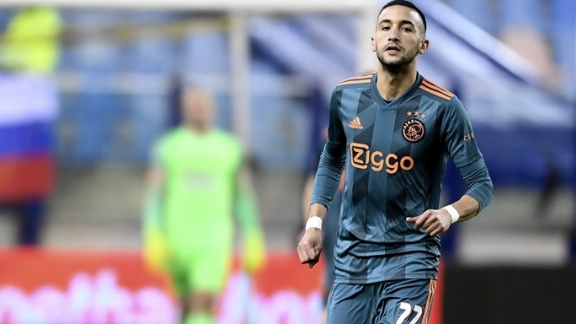 Now that the transfer of Hakim Ziyech from Ajax to Chelsea has been completed, speculation is also starting in England. Manager Tony Pulis expects that Ziyech will be hard at it to keep up with the level of the Premier League. The experienced coach recognizes that the statistics of Ziyech speak for themselves at Ajax, but warns that the 26-year-old wing striker and attacking midfielder will do well on a much higher stage.

“I think you have to be very, very careful,” says Pulis, who has worked as a manager for many years in the Premier League, in the program The Debate on Sky Sports. “Dutch football is not a Premier League football. If you spend so much money, you hope and pray that things will go well, but there is definitely a difference in level between the competitions. The Eredivisie is a good competition, and Ajax was fantastic last year “But the Premiership is a different animal. Dutch football is slower and more technical. The speed and power with which the Premiership is played is of a completely different order.”

Zisyech has left a good impression in Ajax’s Champions League campaigns in the last two seasons, says Pulis. “You can’t criticize what he has achieved so far. What I want to say is: the Premier League is probably the best competition in the world. The boy will notice that he will play against much more powerful defenders. It will be interesting to to see how he adapts and how fast that goes. “

Former striker Kevin Philips, who is also present in the TV studio, has a more positive sound. “I think it’s a great purchase,” says the former striker of Sunderland, among others. “Forty million euros, that’s a pittance these days. One wide player, who plays on the right with a fantastic left foot. He scores goals, he prepares them, he is fast, everything that Chelsea is looking for. Willian leaves at the end of the season. Then you still have Pedro, but you need two players to complete that. He’s also the right age. “

Philips thinks that under the leadership of manager Frank Lampard, Ziyech is able to make the transition from the Eredivisie to the Premier League successful. “Frank has shown that he can work well with young players and make them better. That is why I also think that the new addition, the Moroccan boy, will fit well with Chelsea. Frank has also shown that with Tammy Abraham and Mason Mount, who both made the switch from the Championship, which is a huge step forward. “