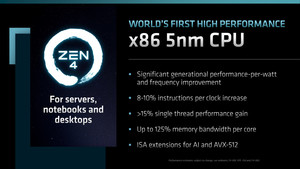 While AMD’s next-generation ZEN 4 CPU is expected to be released in the third quarter of this year, it has been confirmed that the model with 3D V-Cache will be released at the end of the year.

At the beginning of the Computex 2022 announcement, AMD said, “We plan to release a CPU with 3D V-Cache”, so it is expected that it will take some time for the actual consumer CPU to be released.

However, this time AMD senior vice president and general manager of clients, Saeid Moshkelani, said, “We will provide technology like 5800X3D to the Ryzen 7000 series at the end of this year,” so it is expected to be released sooner.

Some analysts say that AMD’s subdivided CPU lineup and mention of the release date is a check on Intel’s 13th generation CPU Raptor Lake. AMD has improved performance by 8-10% in IPC, but in the case of Intel, IPC performance improvement is predicted by more than 10%. It is an interpretation that it is not for suppression of desire.