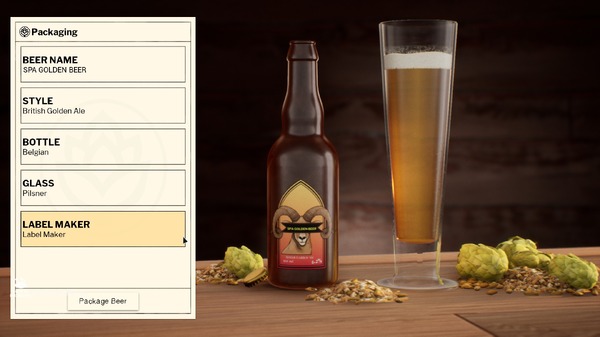 With over 1,000 trials delivered in a week, this event features a number of fascinating games. At Game * Spark, we will pick up and introduce the works that you are interested in playing from the works that are being distributed in the trial version.

What is “Brewmaster: Beer Brewing Simulator”?

A homebrew simulator that allows players to experience beer making. In addition to full-scale brewing including heat management as well as preparation of materials and equipment, it is possible to create your own ideal beer by performing naming, bottling, and labeling. You can brew different types of beer depending on the player.

In the game, in addition to the main mode where you can hone your skills and strengthen the brewing facility while participating in various jobs and contests, there will be a sandbox mode that you can enjoy freely. There are also various decorative items to decorate your home.

This work was announced in March 2021 and has been developed through closed alpha tests. Meanwhile, we have partnerships with the British brewery “Moor Beer Company” and the company “Next Glass” that aims to further develop the alcoholic beverage industry.

In the trial version that appeared at this “Steam Next Festival”, you can experience beer brewing and label making with the prepared recipes, as well as two jobs and a part of the storyline. You can also play various elements of this game, such as customizing decorations in build mode.

Now, let’s first learn how to brew beer. As you all know, the four main ingredients of beer are “wheat (malt), water, hops, and yeast.” In addition, “auxiliary ingredients” such as rice and corn are also used as ingredients for beer brewing.

The homepages of the “Beer Sake Brewing Association”, which promotes the development and management of the Japanese beer industry and the proper drinking of consumers, and the homepages of each of Japan’s leading manufacturers (Asahi / Kirin / Suntory / Sapporo), are for beer. Contains instructions on how to make it. In addition, Suntory can learn in a game format “BEAR iLANDWe also have a site called “.

The method of brewing beer is divided into several steps. First, water is added to the raw material “wheat (generally Nijo barley)” to germinate and dry to make “malt”. The starch of wheat is made into sugar by putting crushed malt in warm water, and “hops” are added to the finished saccharified liquid and boiled. The finished product is “wort”.

“Hop” is an important thing that not only gives beer a unique bitterness and aroma, but also has effects such as clearing the color, improving foam retention, and giving a bactericidal effect. There are so many varieties that it is an element that gives beer a great personality, so even in the modern craft beer boom, you can see hops for sale.

Fermentation begins by adding “yeast” to the finished wort, and the wort changes to carbon dioxide and alcohol in about a week. Beer is completed by adding processes such as storage and filtration to the completed “children of beer”. By the way, this is a common beer manufacturing method, and there are various types of beer and beer made by adding fruit juice and spices all over the world.

Now that you have learned the basics, let’s finally experience the game.

The game begins with a look at a magazine for brewers. The magazine contains “work” to earn money and experience points, “recipe” to introduce how to make beer, as well as information on unlocked people and breweries. The trial version is set for the purpose of getting the job done, so let’s take one job first.

My job is to make beer to celebrate the local band’s first album. It seems that they are looking for a dark beer that matches the concept of the album “as dark as the depths of the universe”. This funny band. Mandatory conditions and bonus conditions are also listed for each job.

Fortunately, there is a beer recipe that uses the condition “Dark Molt” this time, so let’s brew it with reference to this. First, take out the large pot from the shelf and add 21 liters of water. Be careful as the pot needs to be covered. This “removing the lid” is an important operation related to elements such as germs in the game.

In this work, you can work while checking various data such as capacity and temperature. It also has a time fast-forward function. After adding water and putting the pot on the stove, prepare the “malt extract” and “malt” that will be needed in the next process. Rest assured that the recipe will also give you hints on where to find the ingredients.

When the temperature of the hot water reaches 65 degrees, add “malt extract” and “malt”, adjust the heat of the stove as needed, and wait for 1 hour while keeping the temperature. After that, take out the malt, boil the completed saccharified solution, add hops, and boil for another 50 minutes. In this way, the preparation for making wort is complete.

The next step is the fermentation process. The sweet, bitter and mysterious liquid at this point turns into a wonderful dream drink. By the way, this work is homebrewed to the last, so it seems that there are special materials.

Finally the self-made beer is completed!

Transfer the wort to a fermentation container, put yeast in it and wait for 15 days. You can skip the time by checking the calendar and specifying the number of days. After that, follow the recipe written, and after a aging period of 21 days, it is finally completed!

The finished beer goes to the tasting room. On the tasting screen, detailed data such as the color and taste of beer are evaluated over 4 pages. Partly because I followed the recipe, it seems that the beer this time was safely finished as ordered.

Finally, bottling work. In bottling, you can set the name, style, bottle shape, etc. Also, when creating labels, you can freely change the size and position of characters and patterns based on the determined design. The first completed beer was named “SPA STOUT” according to its style and delivered safely.

Earn tokens that allow you to purchase new equipment and raw materials by fulfilling the request. Also, by completing another job, the mastery level became 2, and I got a commemorative decorative item. The trial version ends when you finish two jobs, but you can still make beer freely.

Commitment and freedom as a simulator!

Not only can you make beer by referring to easy-to-understand recipes, but you can also make your own original recipe. You can buy some ingredients such as hops and yeast in the trial version, but the number is still small.

Read Also  "Siberian Mayhem" is on sale, and the launch trailer is also «doope! Domestic and overseas game information site

However, since there are also spice and fruit items in the catalog category, we can expect that the number of beer alcoholic beverages that can be made will increase steadily in the future. Depending on the feedback, it may be possible to realize “beer using dried bonito” brewed by Yo-Ho Brewing in Japan.

After the trial version of the story was over, I tried making beer without relying on recipes. Thankfully, this product has a brief explanation of the taste and flavor of malt and hops. Personally, I like the bitter and refreshing type of craft beer, so I scrutinized some ingredients and brewed them.

The completed “SPA GOLDEN BEER” is a golden beer with a strong bitterness and aroma, as well as flavors such as grapefruit and citrus. I’m worried that the alcohol content is a little low, but it was relatively easy to make the beer that I was aiming for. It is an excellent game design that you can apply if you learn the basics with recipes.

It may be interesting for players to try to taste their favorite beer.

※ note that,In Japan, beverages with an alcohol content of 1% or more are called “alcoholic beverages”.Those that meet this standardIt is forbidden by law to make your own without a license.Violations will result in imprisonment of up to 10 years or a fine of up to 1 million yen.Therefore, please be careful.

The trial version of “Brewmaster: Beer Brewing Simulator” introduced so far. This work, which allows you to easily experience full-scale homebrewing, realizes the commitment as a simulator, playability, and freedom, such as a kind UI and easy-to-understand operations. This work is recommended not only for those who like the simulator genre, but also for those who like craft beer.

By the way, the trial version can be played only in the spring season. As the seasons change in future product versions, factors such as temperature control may appear. The trial version will remain in the spring of the first year no matter how much time passes, so if you keep skipping, you can experience things like “Spring on the 1000th day” …