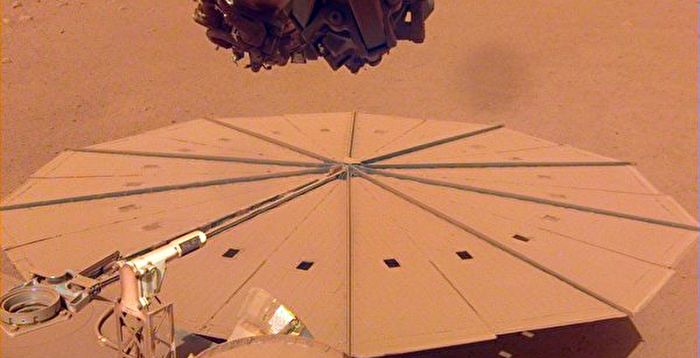 [Epoch Times, May 29, 2022](Epoch Times reporter Di Rui compiled and reported) NASA released the last selfie of the InSight Mars rover, which is about to be shut down and abandoned .

This selfie was taken on April 24. NASA also released the first selfie it took in December 2018. From the before-and-after photos, it is evident that InSight is covered in red Martian dust.

NASA said that so much dust had accumulated on InSight’s solar panels that it didn’t generate enough power to keep the probe working. After taking this selfie, NASA switched InSight to “low-energy” mode, hoping to complete some detection work by July this year, and stop its operation completely by December of the year.

InSight departed from Earth on May 5, 2018, and landed on Mars six months later. Its main mission is to probe the interior of Mars. Before taking this final selfie, InSight had spent 1,211 days and nights on Mars, detecting more than 1,300 seismic signatures on Mars.

These data let scientists know that earthquakes on Mars are much milder than those on Earth, with the strongest being a magnitude 4.0. Such magnitudes would not even vibrate windows on Earth.

But just recently, InSight detected a magnitude 5 earthquake on Mars. Such an earthquake will have some tremors on Earth, but it is considered a “strong earthquake” for Mars. “This shows that there is still geological activity on Mars, just not as intensely as Earth,” Mark Panning, NASA’s InSight project manager, told Mashable.com.

In addition to detecting Martian seismic signals, InSight has also collected a large amount of Martian weather data during its more than four years of work. This information provides an important foundation for future projects on Mars.

InSight’s robotic arm will soon be put into a “retirement pose,” after which the entire machine will be shut down completely, NASA said.

NASA has two other rovers, Curiosity and Perseverance, working on Mars. Both are mobile rovers, located in Jezero Crater and Gale Crater, respectively, while InSight is a stationary rover located in Elysium Planitia. ◇