Top Posts
“After Astra 2nd vaccination, Moderna booster shot, antibody...
International views 4 Thai football gurus look at...
Lee Hye-jung “I almost broke up with Lee...
Fed Brad urges to complete Taper and raise...
Went to the market and came back to...
UAE prepares to buy warplanes from France: Biggest...
Undoubtedly, he got up from the bed suddenly....
[스포츠]Heung-Min Son, Spider-Man and ‘Spider-Man Celebration’ | YTN
Kim Hyun-seok’s Wall Street Now JP Morgan bullish...
[정치]Light carrier budget revival of knights… Start of...
Home Business The Bank of Thailand revealed that Thai people saved more, but only had 38% of their reserves, enough for use over 3 months.
Business

The Bank of Thailand revealed that Thai people saved more, but only had 38% of their reserves, enough for use over 3 months.

The Bank of Thailand revealed the results of the survey. Thailand’s financial skills in 2020: Covid-19 has made Thai people more aware of saving money, but only 38 percent have reserve funds that can last more than 3 months if they stop working suddenly.

On October 28, 21, the Bank of Thailand (BOT) released the results of the 2020 Thai Financial Skills Survey, which showed that Thai people had improved their financial skills at 71.0 percent, higher than the previous survey. Before in 2018 (66.2 percent) and above the OECD’s latest 2020 financial skills survey average (60.5 percent).

When considering the components of financial skills in all three areas, it was found that Thai people have improved in every aspect. Financial literacy was 62.9 percent (55.7 percent in 2018), improving in all topics, but there were still topics that could be further developed and promoted, such as calculating interest on compound deposits. investment risk diversification and the value of money over time In terms of financial behavior, it was at 71.1 percent (67.8 percent in 2018). The topic of money allocation before spending and studying information from credible sources got a high score. However, the topic of money management to avoid insufficient funds have a reduced score

On the other hand, financial attitudes stood at 82.0% (78.0% in 2018), continually improving. In particular, attitudes towards long-term planning for the future were the most evolving topic from 2018. Income instability from the COVID-19 epidemic crisis should contribute to making people more aware of the importance of being prepared for future events

For the survey of attitudes and saving behaviors, it was found thatThe proportion of people with savings in the sample group increased to 74.7% in 2020. (from 72.0% in 2018) and most people are aware of saving money for emergencies. and saving for retirement which the epidemic of COVID-19 This should be the reason why people are more aware of the need for reserves. Only 38 percent had a reserve of more than three months if they had to stop working suddenly. It shows that there is still a need to promote savings to achieve goals. The main motivation for savings comes from having a clear goal or plan for spending money in the future. But only 19.7 percent set aside their savings before spending them, which could be a reason for failing to achieve their savings goals.

When considering financial skill levels by age, it was found that all ages showed improvement in all aspects consistent with the overall picture of the country, with Gen Y having the best financial skill level compared to other ages. High scores on financial knowledge and behavior It is a period that has developed quite a lot of money allocation and study information before purchasing financial products. But it should also encourage reflection before spending to avoid the problem of overspending.

While Gen X’s financial skills are pretty good. Financial attitude was the highest rated topic compared to other ages. They also score well in financial knowledge and behavior. It is the age that gives importance to setting long-term goals. but tend to face problems of insufficient funds and choose to borrow more money to solve such problems than other ages

For Gen Z, the level of financial skills is quite low. moderately knowledgeable They had the lowest scores on behavior and financial attitudes across the ages. However, this age showed a significant improvement in financial skills scores compared to 2018 scores, especially against financial literacy and behavior. Therefore, the overall financial behavior should be continuously developed.

For Gen Baby Boomers and above, the level of financial skills is the lowest. Has the lowest knowledge score on all topics. but has a pretty good financial attitude It is the age when the problem of insufficient money is less than other age groups. and tend not to borrow money in such event. However, comparison and research should be developed from appropriate sources before purchasing financial products. 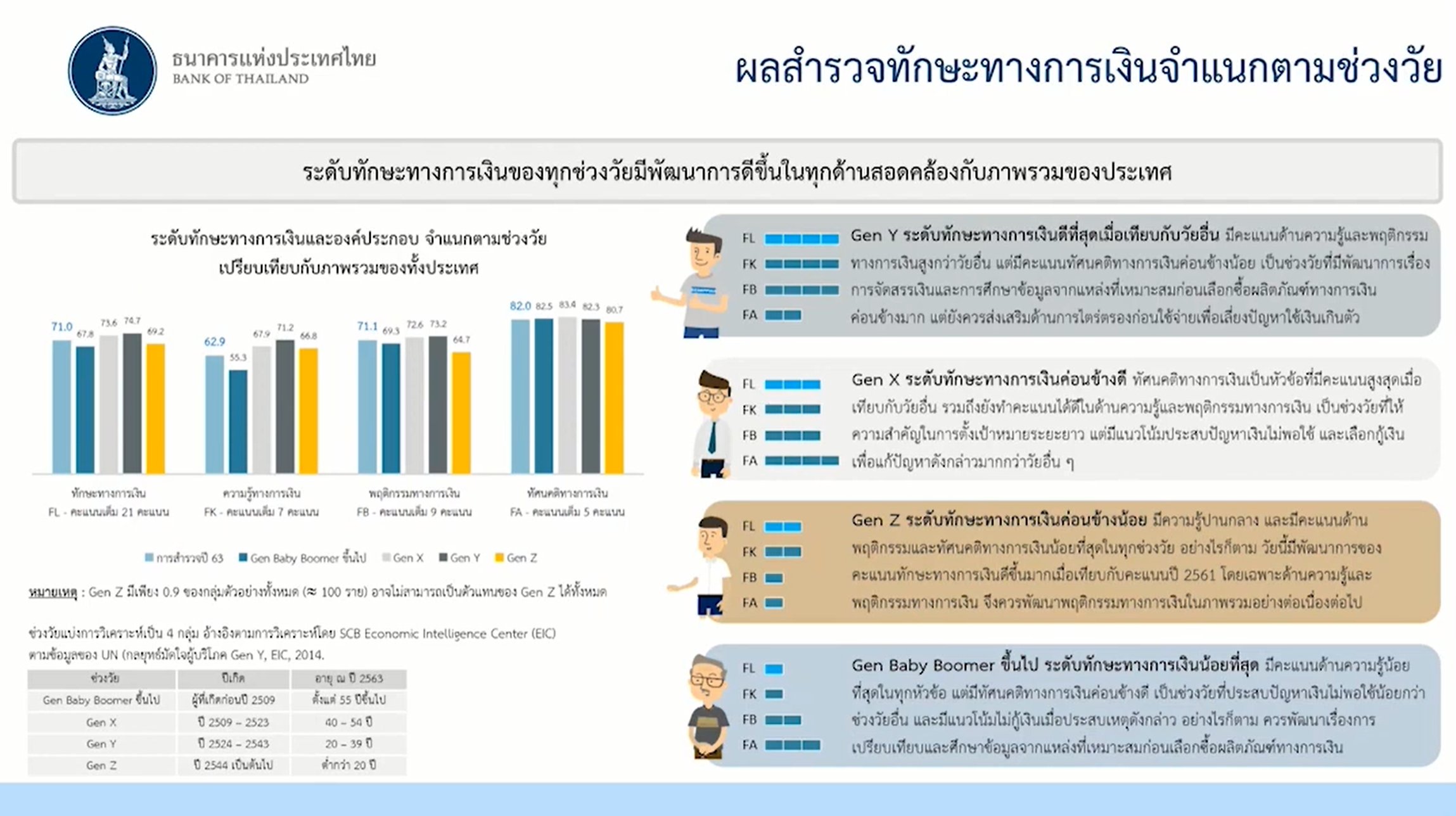 – The Department of Health reveals that 92.4% of the people’s polls in 17 provinces are worried about opening the country, causing a new wave of outbreaks.
– The bank has fully refunded 130 million, the victim of the debit-credit card fraud
– The Revenue Department warns against believing in fake tax return emails

The Court of Appeal ordered “Surin” to...