Top Posts
[Incoming materials from the market]Alibaba’s stock price has...
[정치]’607.7 trillion super budget’ passed the deadline… Reflected...
European stocks fall on disappointing U.S. employment data,...
India to bat in second Test; Siraj and...
Chiang Mai extends walk in time for Pfizer...
Kim Jun-hee died and came back to life…...
[유럽증시] Omicron continues to decline amid concerns over
[날씨] Sunny all weekend, below freezing in the...
Despite the spread of Omicron… US “boost shot...
Rangnick “Man Utd is a big club. There...
Home World The death toll of immigrants at the U.S.-Mexico border reaches 557
World

The death toll of immigrants at the U.S.-Mexico border reaches 557

According to a report by CNN, data released by the US Border Patrol on the 28th showed that in the 2021 fiscal year, the number of immigrant deaths on the southwestern border of the United States, that is, the border between the United States and Mexico, reached a record high, reaching 557, compared with the previous fiscal year. More than doubled. According to the media, this number does not truly reflect the situation at the US-Mexico border, and the true number of immigrant deaths may be even higher.

The U.S. Border Patrol reported that in the fiscal year from October 1, 2020 to September 30, 2021, the number of immigrants who died at the U.S.-Mexico border was 557, higher than the 254 deaths in fiscal year 2020, an increase of approximately 119%. At the same time, this figure set a record high in 1998. According to the report, because immigrants often get lost due to the complicated terrain on their way to the United States, and the local climate is hot, most of these immigrants died due to heat exposure. The report pointed out that because some states along the U.S. border often find the remains of immigrants without the participation of U.S. Border Patrol law enforcement officers, the death figures released by the U.S. Border Patrol cannot truly reflect the death toll of all border immigrants, and this also means The number of immigrants who died at the US-Mexico border may be higher than 557.

According to data released by the US Department of Homeland Security on the 22nd, the US government recorded more than 1.7 million illegal immigrants intercepted at the US-Mexico border in the past 12 months, the most in history. Records show that among illegal immigrants intercepted in the past 12 months, about 78% of immigrants came from Mexico and Central American countries, and more than 370,000 immigrants came from dozens of other countries including Ecuador, Brazil, and Haiti. Approximately 61% of the intercepted migrants were deported. U.S. border officials have implemented more than 1 million deportations on the grounds of public health emergency policies. 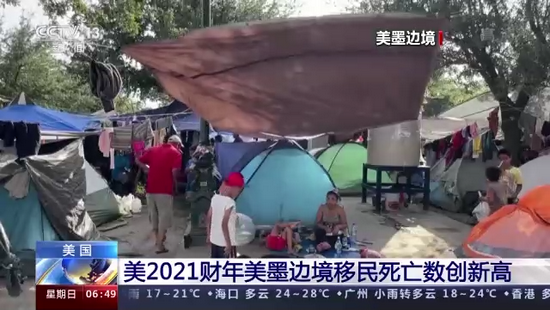 Since the beginning of this year, the wave of illegal immigration at the border between the United States and Mexico has continued, posing a severe challenge to the governments of the United States and Mexico. At the same time, there are constant reports of incidents of immigrant family separation at the border or being extorted or beaten by the US media, which has aroused widespread criticism of the US government’s immigration policy.

Despite the spread of Omicron… US “boost shot...

[국제]WHO: “There are no reports of omicron-related deaths…...

This is the new Pakistan: Imran Khan mocked...

A swarm of snakes entwined inside the...