Recently, a developer named “Very Positive” was banned by steam because it believed that the developer had misled players’ evaluations.

Steam players must know that the game reviews on steam have positive reviews, rave reviews, special reviews, most reviews, and mixed reviews. Among them, on the steam English page, “Very Positive” is displayed as “Very Positive”.

Recently on steam, a game called “Emoji Evolution” has attracted people’s attention. Its developer’s name is “Very Positive”, which means “very positive reviews.” Therefore, in the English Steam page, players who are not paying attention can easily regard this “Very Positive” as a game evaluation, and consider the game’s evaluation as “Specially Positive”. 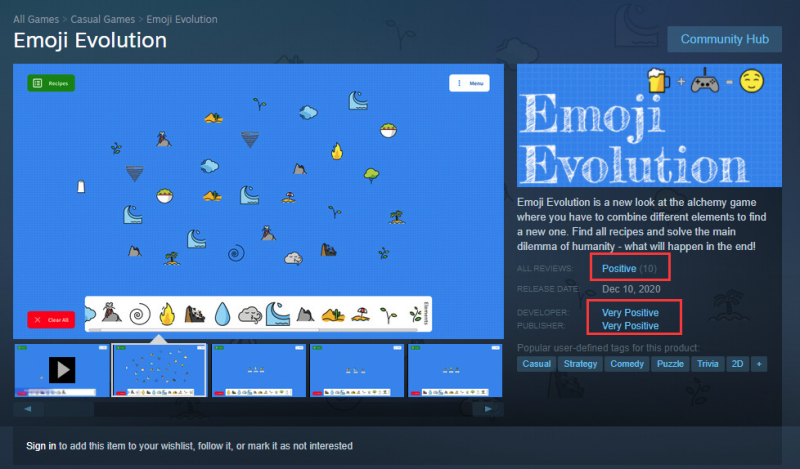 Recently, in a conversation with Vice, the developers of “Emoji Evolution” stated that they knew that reviews would have a significant impact on users’ decisions, and noticed that the font colors of developers and publishers were similar to those of reviews, so they decided to use The name.

At that time, the developers thought that V agency would not punish this, and said that “V agency fully understands how trivial this technique is.” But as the matter became public in the media, V agency eventually banned the developer on steam. However, the developer of Very Positive “disagreed” with the accusation. He also said: “I did a terrible job. This is the only thing I am guilty of. But if you are not allowed to make bad games on steam, why have they not Ban CDPR’s account?”

Gil, “I will reveal details after clearing up” in the tank exposure