(This article continues to be updated. The time shown at the beginning of the article is the update time of this article.)

According to real-time statistics from Johns Hopkins University, as of 8:30 am on October 24th, Beijing time, a total of 4,075,568 cases of new coronary pneumonia have been confirmed globally and 1,141,775 deaths. 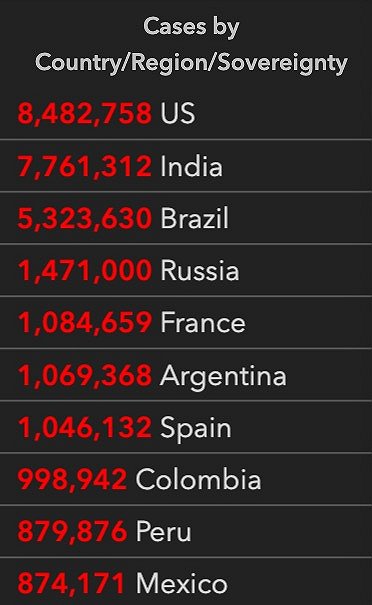 0800[WHO: The number of new crown infections in many countries is increasing exponentially, and the northern hemisphere is at a critical moment in fighting the epidemic]

0800[Global trade in services in the second quarter of this year fell by 30% year-on-year, the largest drop since the 2008-2009 international financial crisis]

0800[The number of new confirmed cases of new crown in a single day in Europe exceeded 200,000 for the first time on the 22nd, and the number of single-day cases in France, Italy, Croatia and other countries reached a new high]

The number of new coronavirus cases in a single day in Europe reached 100,000 for the first time on October 12, doubling after ten days.

0800[WHO: In the coming weeks, intensive care units in many European cities will reach saturation]

About 445,000 new cases have been reported globally in the past 24 hours, and nearly half of them are from Europe.

0800[From midnight on the 24th, 54 provinces and overseas territories in France, French Polynesia, will impose a curfew from 21 pm to 6 am the next day]

0800[The French first lady tested negative for the new crown virus, and the quarantine will be lifted immediately]

0800[Confirmed cases of new coronary pneumonia in more than half of schools in Northern Ireland, and the number of cases reaches 2030]

0800[Italian National Institute of Advanced Health: The effective number of infections of the new coronavirus reaches 1.5]

In the latest monitoring cycle from October 5 to October 18, the average number of confirmed infections per 100,000 people has risen from 75 in the previous monitoring cycle to 146. There are 7,625 outbreak sites in Italy, an increase of 1,286.

0800[Medvedev: imposing sanctions on some countries during the epidemic is a “shameless move”]

0800[The Netherlands has 1,007 new confirmed cases in the past 24 hours, another record since the outbreak]

A total of 272,401 confirmed cases have been confirmed.

0800[U.S. Government Medical Director: The United States may soon break the number of newly confirmed cases in a single day]

0800[US Secretary of Health: Family gatherings have become the “main vector” for the spread of the new crown virus]

0800[Fauci: The vaccine is expected to be widely used in the months after the beginning of 2021]

0800[Chief Scientific Officer of Johnson & Johnson: Vaccine trials are expected to restart on Monday or Tuesday]

And will release data on the efficacy of the new crown vaccine trial at the end of 2020 or early 2021.

0800[U.S. White House Chief of Staff: I hope to reach a new crown assistance agreement within a day or so]

0800[India relaxes visa and travel restrictions, except for tourist visas, overseas Indian citizens, people of Indian descent and foreign citizens can visit India for any purpose]

As of the 21st, the average number of infected people in Japan in the last 7 days was 172, basically the same as the 181 in the previous week. The Tokyo Metropolitan Government’s alert level remains at the second highest level, “it is necessary to alert the infection to expand again.”

0800[WHO approves a new method for rapid detection of new coronavirus, Africa’s detection capacity may be significantly improved]