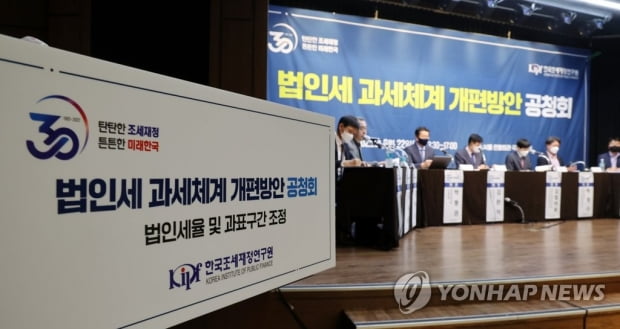 Jo Se-yeon “The highest corporate tax rate for 10 years from 19th to 9th in the OECD… The most complex taxation system in the OECD”
Concerns over financial soundness also claim to “consider the increase in value-added tax, etc.”

The government, which is pushing for a corporate tax rate cut, has refuted the criticisms of ‘tax cuts for the rich’ and ‘tax cuts for large corporations’.

He explained, “Compared internationally, our country is paying too much corporate tax, and when excessive tax burden and regulations continue, Korean companies will not invest in Korea.”

Manager Park also said, “I do not agree with the criticism that a cut in the top corporate tax rate is a tax cut for the rich, and it is difficult to agree with the dichotomous thinking that divides large corporations and SMEs into criticism.”

“The burden of corporate tax is ultimately passed on to shareholders and consumers,” he questioned.

Regarding the criticism of the decrease in tax revenue, he countered that “even if the tax rate was lowered, corporate tax revenue continued to increase.

According to the government, the tax revenue reduction effect of the 3 percentage point cut in the top corporate tax rate was estimated to be between 2 trillion and 4 trillion won.

However, this is an estimate based only on the top tax rate cut itself, and the actual tax revenue effect can only be known when the tax rate adjustment is finalized in the tax law revision.

At the public hearing that day, there were also arguments that the corporate tax rate should be lowered and the tax structure should be reformed.

“The current four-step progressive structure should be relaxed by adjusting the section of the corporate tax base,” said Kim Bit-maro, head of the Tax and Finance Outlook Center at the Korea Institute of Taxation and Finance.

Director Kim pointed out, “The progressive tax rate structure may hinder corporate growth and induce abnormal behaviors such as corporate spin-offs for the purpose of tax avoidance, and it does not conform to international standards.”

According to Se-yeon Jo, among the 38 OECD countries, only Korea and Costa Rica have a corporate tax base of level 4 or higher.

The highest corporate tax rate (25%) is also the ninth highest in the OECD.

Kang Seok-gu, head of research at the Korea Chamber of Commerce and Industry, said, “Companies face uncertainty and have to make large-scale investments.”

Kim Hak-su, head of the Korea Development Institute’s (KDI) fiscal and social policy research department, also said, “Theoretically, the effect of lowering the corporate tax rate on investment and employment expansion is clear.” It has an effect,” he analyzed.

However, the short-term decrease in tax revenue caused by the tax rate cut was pointed out as a problem.

“It is an incomplete policy to only lower the nominal top tax rate for corporate tax,” he said.

Opposition to lowering the corporate tax rate was also expressed.

Woo Seok-jin, a professor of economics at Myongji University, pointed out, “In the past, when the corporate tax was lowered, companies did not invest or increase employment or dividends.

In addition, he said, “There is a phenomenon in which the effective tax rate of corporate tax is rather low in the range of 500 billion won or more of the current tax base.

The government plans to reduce the top tax rate from 25% to 22% through this year’s tax law revision and simplify the taxation section.

At the public hearing that day, discussions were also held to resolve the issue of double taxation of corporate dividend income.

Jeong Hoon, head of the tax research team at the Korea Institute of Taxation and Finance, said, “When the mechanism for preventing double taxation on foreign dividend income is converted from tax credit to tax exemption, several factors such as economic effects such as dividend inflow and interaction with tax treaties must be considered.” pointed out

In addition, he added, “If foreign dividend income is converted to tax exemption, it may be necessary to change the dividend income of domestic subsidiaries accordingly.”

Previously, the government decided to reorganize the dividend income taxation system in line with international standards, in which the issue of double taxation was pointed out.

In particular, the taxation method for income distributed domestically by corporate subsidiaries that have entered overseas markets is changed from residence-based (taxation based on residence) to source-based-based (taxation on overseas income is exempted).

The sound of gunfire still echoed across the border. 50 Myanmar soldiers were killed, many more injured.
Posted onJune 29, 2022June 29, 2022