Top Posts
Kim Byung-jun “Jo Dong-yeon is a pretty brooch”…...
Rihanna has been named ‘national heroine’ after Barbados....
ICC Test Ranking: Williamson hits back, Jadeja, Latham,...
Special tape for Father’s Day “Somrak-Base” invaded which...
This is a prototype of some AirPods and...
GH Bank launches premium lottery, 10 million baht...
“D-Max-Ford Ranger”, 3 injured, 2 killed, “16 girls...
The wife of a drug lord from a...
Watch Aston Villa vs Manchester City live stream
Jung Eun-ji is wondering if it is right...
Home Business The increase in loans to the homeless… Reduced the limit based on the ‘income standard’
Business

◆ The storm after loan regulation ◆

As the government’s loan policy to support homeless people in purchasing their own home was overturned in less than half a year, concerns are raised that the government’s urgent policy for temporary measures could increase the difficulties of end-users. At the bank counter, inquiries from consumers who are concerned that the loan limit will be reduced from next year due to the government’s measures against household debt are continuing.

As a result of estimating the amount of housing loan possible in accordance with the ‘Household Debt Management Reinforcement Plan’, which expands the application of the 40% DSR regulation announced by the government on the 27th, Maeil Economic Daily It is calculated that the amount that can be borrowed is significantly reduced.

Assuming that a homeless person with an annual income of 40 million won purchases an apartment with a market price of 600 million won located in a speculative area, a 20 percentage point preferential benefit is currently applied to the 40% mortgage loan ratio (LTV) regulation. You can borrow up to 3.6 million won, which is %. Since July, the government has implemented measures aimed at easing LTV to support homeless people in finding their own homes. However, after January next year, the DSR regulation will take precedence over the LTV easing requirements, which will significantly reduce the loan limit. The maximum amount of mortgage loan that A can receive to meet the 40% DSR regulation is 290 million won. Converting this to LTV, it is 48.3%. The government’s policy of increasing benefits for the homeless is incapacitated in less than half a year. 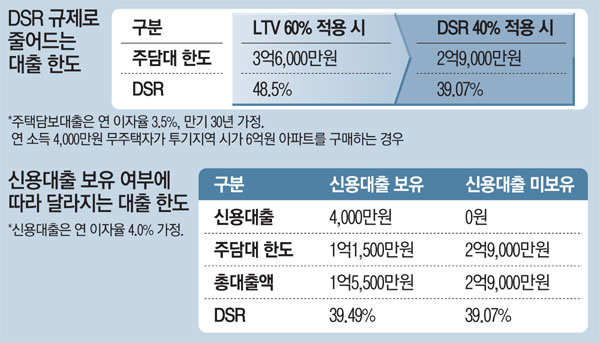 On that day, inquiries from the bank window to see if they could get a loan next year in relation to the government’s measures against household debt followed. B (41), who visited a commercial bank branch in the metropolitan area, said, “I am planning to purchase a house next year as the jeonse period will expire, but I am concerned that the loan limit will be reduced.”

From January next year, the maturity of the credit loan will be reduced from 7 years to 5 years, so the principal and interest of the loan will be large. DSR is the annual amount of repayment of principal and interest on a loan divided by annual income, so the loan limit decreases as the maturity of the loan decreases. As credit loans work against the calculation of DSR, the end-user who wants to buy a house can repay the existing credit loan and get a mortgage loan to increase the loan limit.

As the government decided to include card loans in the DSR calculation from January next year, there is also a forecast that card loan users will contract for a longer maturity of three years. The Financial Services Commission decided to apply the calculation maturity of the card loan as the ‘contract maturity’. The maturity of card loans ranges from a few months to two to three years, with the most being one year. If the contract period is extended to 3 years, as the loan limit increases, it is expected that there will be a demand for re-financing by using the advantage of a card loan with no prepayment fee. In addition, there is a possibility that end-users who have been pushed to the loan cliff will be flocked to this by excluding cash advances from the DSR calculation.

Among Us has been revealed! The next role is ‘Shapeshifter’, an imposter who can transform into a Crewmate.