Top Posts
No need for panic in Omicron, vaccine improvement...
Liverpool, Chelsea, City win | Sports | Deshabhimani
Account transfer 1140 times by 1 won… Jinyoung...
Photos of Valve’s in-house game console “Steam Deck”...
New York stock market falls on sluggish employment...
The World Health Organization (WHO) has said no...
Private entrepreneurs in Pattaya ask the governor for...
AIS complete 106 live games-PPTV joins the broadcast...
Gina the Face shares a clip of how...
Multi-display layout as you want with the arm-PC...
Home Entertainment The movie “Always Love Is in Isolation” will be launched on May 4th, the luxurious main creative lineup attracts attention
Entertainment

The movie “Always Love Is in Isolation” will be launched on May 4th, the luxurious main creative lineup attracts attention

Initiated by the Hong Kong Performing Artists Association and the Hong Kong Film Workers Association, the top ten film companies in Hong Kong have jointly produced for the first time in history. Tsang Zhiwei, Huang Baiming, Jackie Chan, Leung Ka Fai, Hui Guanwen, Wu Zhenyu, Lin Jiadong, Fang Lishen, Zhang Zhilin, Zhou Xiuna, Liu Xinyou, Xue Kaiqi, Chen Jiale The comedy movie “Always Love Is in Isolation”, which was performed by many well-known Hong Kong actors, including Koo Tianle (listed in no particular order), will be launched on iQiyi on May 4th. Once the news was exposed, the movie’s luxurious main creative lineup and the charitable act of helping the grassroots behind it aroused heated discussion among the audience.

“Always Love in Isolation” tells the story of everyone in the sudden crisis, together to understand the true meaning of life. Among them are the spiritual power to face life and death and laugh at parting, as well as the deep warmth of reconciliation with self and family. In the trailer exposed today, hundreds of celebrities have reappeared as various characters in classic works. The film also interspersed with a number of classic Hong Kong film plots familiar to the audience as an extension, which cleverly brought together unknown endings or Easter eggs. At the same time, in a humorous and exciting way, the audience is full of surprises and resonance in the process of watching the movie.

The film is a non-profit film initiated with “rescuing the grassroots of the film industry” as the core. Last year, due to the impact of the general environment, the Hong Kong film industry was in a downturn. Many Hong Kong film practitioners were more or less affected, and even affected their lives. The original intention of the filming of this film was to provide support for them, and all the film’s box office income , Will be used to subsidize those who are struggling to live and stick to the grass-roots level of the film and television industry. 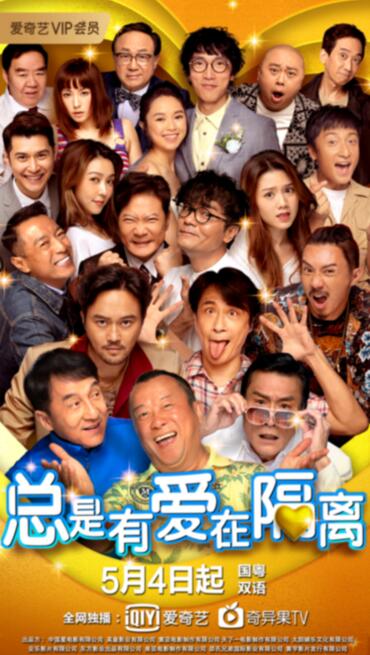 It is reported that while “Always Love Is in Isolation” was launched on iQiyi on May 4, it was composed of Andy Lau, Jacky Cheung, Hacken Lee, Joey Yung, Grasshopper, Lu Guanting, Liang Hanwen, Xue Kaiqi, Zheng Xinyi, Zheng Rong, Lian Shiya, Wu Haokang. The theme song “If there is love in my heart”, which many artists will sing together, will also meet with the audience on May 6. Let us look forward to this film bringing hope and love to people in adversity!

‘Overcoming the difference of 6 points’ SD, overpowering the Dodgers at the end of the extension… Kim Ha-sung came out with a pinch and strikeout

10 ways Jumanji and Zathura could be...

Tiara is threatened with delayed murder, so...