The film “Peacekeeping Anti-Riot Team”, produced by Liu Weiqiang and directed by Li Dachao, has been successfully completed a few days ago, and the leading poster was released today. The film is starring Huang Jingyu, Wang Yibo, Zhong Chuxi, Zhang Zhehan, and Gu Jiacheng. In the film, they wear blue helmets and are fully armed, recreating the heroic image of the Chinese peacekeeping police marching forward for peace and bravely marching forward. The film is expected to be released in 2022.

The film producer is Liu Weiqiang, who has directed “The Great Cause of Army Building”, “Chinese Captain”, and “Chinese Doctor”. Director Li Dachao has cooperated with Liu Weiqiang and more than ten works such as “Heroes of Fire”. The tacit cooperation of the two makes people look forward to this exciting time. Present. In fact, there are more than 1,100 staff members in front of and behind the scenes of the movie “Peacekeeping Anti-Riot Team”, which took more than three years of preparation and shooting. With a golden team and professional attitude, they use lens and light to convey the Chinese people’s cherish and love for peace. In the film, the Chinese peacekeeping police anti-riot team performs missions overseas. In order to maintain security and peace, they move forward in danger, sleep with gunshots, and show the world that China is a major country in maintaining international peace. 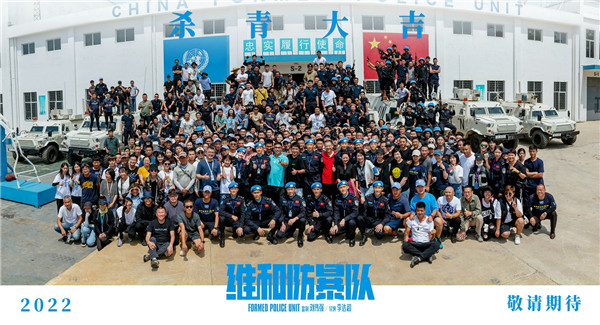 The current situation of Plum, who became a...

When such thoughts arise, Nazriya asks; “Who do...

The new trailer for the domestic animation “Jigong’s...

Singer Jadu, who is married to a Korean-American...

Solbi “Recent times of adversity…I’ve been criticized for...

May 3, 2021
We use cookies on our website to give you the most relevant experience by remembering your preferences and repeat visits. By clicking “Accept All”, you consent to the use of ALL the cookies. However, you may visit "Cookie Settings" to provide a controlled consent.
Cookie SettingsAccept All
Manage consent