The opera “The White Haired Girl” sings on the 4th China Opera Festival, the audience experience the classic charm online_人民_作品_杨白

CCTV News, Beijing, November 25 (Reporter Zhao Zixuan) It was born in the form of an opera, and was adapted into a variety of literary and artistic forms such as movies, dramas, ballets, and TV dramas to meet with a wide audience. The story of the classic play “White Haired Girl” is in-depth People’s hearts affect generations of Chinese sons and daughters. On the evening of November 23, with the melody of “North Wind Blowing”, the opera “White Haired Girl” was staged in the 4th China Opera Festival through online live broadcast, allowing the audience to feel the infinite charm of the red classic national opera.

The opera “White Haired Girl” is China’s first new opera created by Yan’an Lu Xun Academy of Arts and Letters in the “New Yangko Movement”. It is also a milestone in national opera and has a profound historical influence. The work creatively integrates the three of poetry, song and dance. From the perspective of the overall structure, it absorbs the splitting method of traditional national opera, making the scene changeable and flexible; from the perspective of the opera language, it inherits China The narrative method of both singing and verbal use in opera clearly shows the development stage of the story; from the musical point of view, it adopts the tunes of northern Chinese folk music, absorbs opera music and its expression methods, and draws on the creative experience of western opera to form a unique Ethnic flavor; from the perspective of performance methods, combining the performance methods of traditional Chinese operas, drawing lessons from dance figures and chanting rhythms, is easier for the masses to understand.

Since the great success of the public performance in Yan’an in 1945, the opera “White Haired Girl” has been continuously on the stage, giving full play to the infectious power of artistic works and playing a huge role in publicity and education. The classic chants such as “North Wind Blowing”, “Ten Miles of Wind and Snow”, and “Tie the Red Rope” have become classic melodies that have been remembered by generations of Chinese.

The opera “White Haired Girl” is based on the folklore of the “White Haired Fairy Girl” in the Shanxi-Chahar-Hebei border area, refined and processed according to the reality of the revolutionary struggle at that time, and creatively adapted with the opera as a presentation method. The story takes place in a rural area in North China in 1934. Under pressure, tenant farmer Yang Bailao had to sell his daughter Xi’er to repay the debt, and then committed suicide with hatred. After being insulted by the landlord Huang Shiren, Xi’er hid in the mountains in order to avenge the blood. Due to a long-term lack of salt, her hair turned white, and she became the “white hair fairy” in the villagers’ legend. With the arrival of the Eighth Route Army, Huang Shiren and others were brought to justice by a public trial, Xi’er got a complete turn over and started a new life. 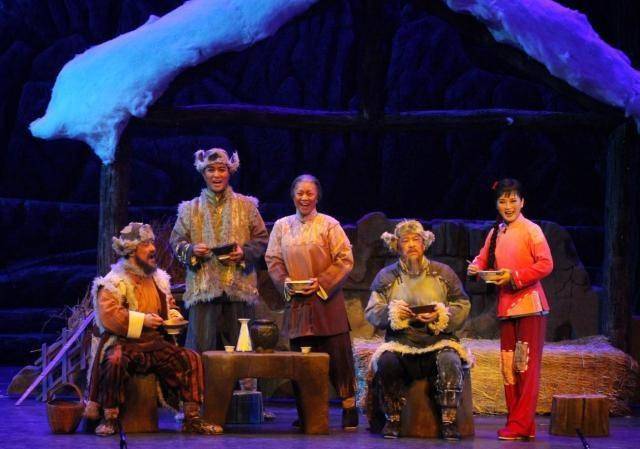 Through the tragic experience of the two generations of Yang Bailao and the father and daughter of Xi’er, the play profoundly reveals the sharp class contradictions, and vividly illustrates that “the old society has forced people into’ghosts’, and the new society has turned’ghosts’ into people.” The theme points out the only way for farmers to stand up and emancipate. At the same time, the work exposes the deep roots of this tragedy with profound realism, while maintaining the romantic tone, expressing the strong ideals and desires of the people in terms of character image creation and plot arrangement. The industry commentary opera “White-haired Girl” created a strong drama conflict through vivid characters such as Xier, Yang Bailao, Wang Dachun, and combined profound ideological themes with typical characters, and became a classic in the minds of countless Chinese people. The literary and artistic works still maintain fresh vitality.”

“Opera” magazine editor-in-chief You Weizhi said that in today’s extremely rich culture and entertainment, how to create works that the general public loves to target different audiences and truly achieve a hundred flowers and a hundred schools of thought is a problem that today’s literary and art workers must seriously think about. Of course, any creation is inseparable from two points, one is national, and the other is life. I think this is the most fundamental significance of the continuous re-arrangement of the opera “The White Haired Girl”.

Qihong, a famous musicologist, believes that national opera is a treasure and a wonderful flower in the opera art of our country. Although it has been severely challenged since the new era and has fallen into the dilemma of “one-line single biography”, its glorious history and great achievements cannot be erased. The subject of its rich creative experience is not only not outdated today, but still contains powerful life energy. . What contemporary opera singers and composers should do and can do is to earnestly summarize the historical experience of national opera creation, reflect on the gains and losses, make use of the advantages and eliminate the disadvantages, and let it be the opera of the Chinese people on the stage of the Chinese opera in the new century. In life, glow more dazzling brilliance.Return to Sohu to see more

Spectators with Pakistan Murdabad calls during the Kanpur Test

“Children’s luck while going to an entertainment...

Zhao Liying’s fan base was banned on...