The reason why the U.S. state-of-the-art F-35 was deployed to Guam’Jungle Runway’ without a control tower

The U.S. Air Force trains to deploy an F-35 stealth fighter on the jungle runway in Guam next month. This is a countermeasure that came when China had long-range missiles capable of hitting Guam directly. North Korea also threatened to strike Guam.

Northwest runway of Anderson Air Force Base in Guam in the early 2000s. It is said that she is still in no better condition than me. [미 공군]

According to Air Force Magazine on the 26th (local time), the U.S. Air Force plans to deploy F-35 and F-16 fighters on the northwest runway in February at Cape North, a multinational exercise held at the Anderson Air Force Base in Guam. Cape North is a combined exercise of the three air forces of the United States, Australia, and Japan. Each year, 100 fighters and 2,500 personnel participate.

Guam’s Anderson base is at the heart of the US Pacific strategy. When reinforcing bombers or reconnaissance aircraft in the Indo-Pacific region in the US mainland, they are always deployed in Guam. Anderson Base’s Northwest Field is a simple runway built in the jungle. It is about 2.4km long and the packaging is not good. It was built for temporary use by transport aircraft and helicopters such as the C-130. There is no control tower.

A video released by the Air Force of the People’s Liberation Army of China. A missile launched from the H-6K is depicted hitting the US Air Force Base in Guam Anderson. [유튜브 老王视角 계정 캡처]

However, putting the F-35s and F-16s here is related to the US Air Force’s Rapid Combat Deployment (ACE) tactics. Rapid combat deployment is a tactic of the US Air Force that confuses the enemy by setting up several simple bases, causing small units to move between these bases frequently.

“China and Russia are developing their ability to threaten US bases overseas,” said Brigadier General Jeremy Sloan of the US Air Force 38th Fighter Wing stationed in Guam. “To respond to this, the US Air Force is a well-equipped base. You should not rely on it.” 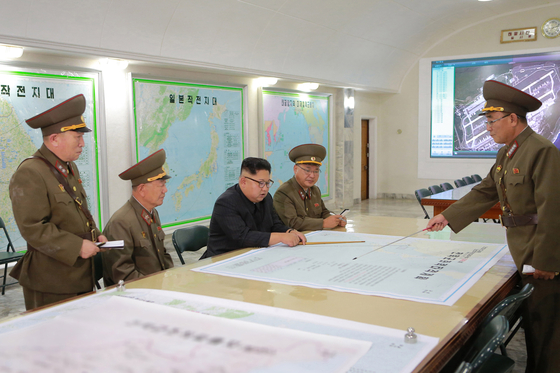 On August 14, 2017, North Korean State Council Minister Kim Jong-un visited the Strategic Forces Command and received a report from Strategic Military Commander Kim Rak-gyeom on the plan for a’siege fire in Guam’. On the TV screen behind Commander Kim, there is a satellite image of the Anderson Air Force Base in Guam. [조선중앙통신]

China has developed the DF-26 medium-range ballistic missile (IRBM) that flies from China to Guam. The missile’s nickname is’Guam Killer’. In September of last year, the Air Force of the People’s Liberation Army released a video of a bomber attacking Guam. North Korea also threatened to besiege Guam with missiles in August 2017. At the time, the North Korean state media revealed that Chairman Kim Jong-un received a report from the Strategic Command with a satellite image of the Anderson Air Force Base in Guam next to it.

No need for panic in Omicron, vaccine improvement...

The World Health Organization (WHO) has said no...

Democracy summit, the U.S. struggles to achieve its...

Iran to resume negotiations on restoration of...

US Election｜Trump team filed a filing with...