The ‘steel’ mound made by a 152-win pitcher, the driving force for KT to rise to the top

The strongest mound in the league created by ‘Steel Magic’. It is the driving force behind the youngest team, KT, to reach the top of the pennant race.

KT has been at the bottom for three consecutive years since the first season (2015) of entering the first team. In the 2018 season, when free agent (FA) infielder Hwang Jae-gyun was recruited, he climbed a notch to ninth place. It was tagged as ‘the lowest in ten thousand years’. In particular, the mound power was poor. In the fourth season (2015-18), the ERA was 5.64, the highest among 10 clubs. They were also the only team not to record triple-digit saves.

In October 2018, KT wrote a new version. As a player, he won 152 victories (3rd place in his career) and recruited coach Lee Kang-cheol, a ‘pitcher trainer’ who had abundant experience as a leader at KIA, Kiwoom, and Doosan.

At the inauguration ceremony, manager Lee Kang-cheol said, “I will advance to the postseason.” It was the will to capture both grades and development. However, KT has been creaking from the beginning of the 2019 season. In the first 40 games, they lost 27 (13 wins) and finished 10th.

Director Lee Kang-cheol reset the route from this point on. He looked back, “I couldn’t dwell on the victory in front of me. First, giving the pitchers clear positions and establishing a clear starting position was the first task to strengthen the team’s stability.”

Director Lee Kang-cheol broadened his horizons. Bae Seong-seong and Kim Min-soo, who had not appeared in 30 games in the first team before, were used as starting pitchers. From the final camp that I led for the first time after taking office, I looked at their potential. The two pitchers settled into the starting lineup and played rotations until the end of the season. Bae Seong-seong became the first native pitcher to achieve double-digit wins (10 wins) in KT.

Manager Lee Kang-cheol also reorganized the bullpen. In the 2018 season, Joo Kwon, who went back and forth between the starting and the bullpen, was fixed as the setup man. Dae-eun Lee, who used to be the starting pitcher at the beginning of the season, left the closing pitcher, and former closing pitcher Jae-yoon Kim, the 8th mound. The KT bullpen that built the Pil Seung-joo had a sense of stability. The bullpen ERA for the second half of the 2019 season was 2.57. 1 out of 10 teams. KT recorded a win rate of 50% for the first time in its foundation with improved mound power. 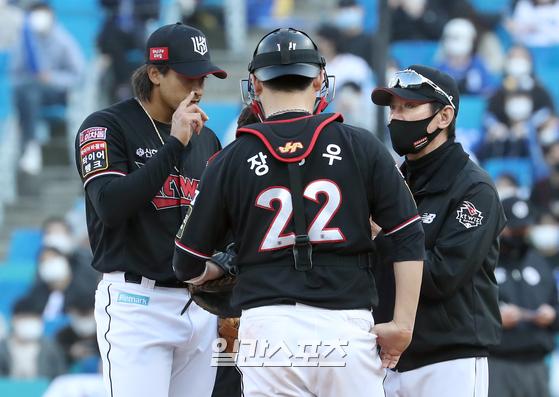 On the afternoon of the 31st, KT Wiz and Samsung Lions played a single match for first place in the 2021 KBO League regular season at Daegu Samsung Lions Park. KT coach Lee Kang-cheol visits the mound after Samsung Koo Ja-wook gets a walk in the bottom of the 7th inning and calms the starting Cuevas. Daegu = Reporter Jeong Si-jong [email protected] /2021.1.31.

The 2020 season made a stronger mound. In the starting lineup, a lumber that could grow into an ace appeared. it’s a small john Manager Lee Kang-cheol praised him as “a perfect pitcher in terms of pitch, pitch, and distribution”, and selected a rookie pitcher as the starting pitcher from spring camp. So, So-Jun, who has been a winning pitcher since his debut, won 13 victories that year and became the rookie of the year, worthy of the coach’s unconventional belief.

The bullpen also gained strength. Joo Kwon took the title in this category with 31 holds in the 2020 season. Kim Jae-yoon, who took over as a finishing pitcher instead of Lee Dae-eun, who was sluggish, also recorded the most saves (21) by a pitcher for KT in a season. A new face was also discovered. Manager Lee Kang-cheol, who was worried about the absence of a left-handed pitcher, steadily gave an unknown opportunity to Cho Hyun-woo, who grew him into a member of the Pil Seung-jo. In the 2020 season, KT achieved second place in the pennant race and achieved the best performance in its founding.

While respecting the individuality and thoughts of the players, Manager Lee Kang-cheol suggested a direction to go one step further in both skill and mentality. It also provided motivation by taking care of records that give meaning to each individual.

In the 2021 season, right-handed sidearm pitcher Ko Young-pyo, who completed his military service, joined. ‘Starting baseball’ is in full bloom. The KT starting team ranked first this season in wins (53 wins), ERA (3.69), and Sohwa innings (812 innings). The October Rays, which struggled with the batting line stagnation, were able to survive, with the starting team recording the league’s top ERA (3.25). Bullpen pitchers recruited in the offseason also showed their presence at every turning point.

The mound, which used to be a weakness, has now evolved into the driving force that led KT’s baseball to the top. Manager Lee Kang-cheol changed the team.

‘Street Woman Fighter’ left a deep impression… The intention of planning, why did it work this way?

Li Tie apologizes to the Football Association for...

Nukulkit, the Thai footballer, won the most...