The typhoon is expected to pass soon, so we looked at the areas where we should be more careful. From now on, we will analyze the characteristics of this typhoon in detail with reporter Jung Gu-hee from the meteorological team.

Q. What is the current typhoon intensity?

Let’s take a look at the appearance of Typhoon Ohmais slowly from the stage of its occurrence.

Typhoon Omais occurred in the eastern seas of the Philippines, and at the beginning it moved north at a slow speed of about 30 km/h.

But now it’s about 68 km/h, but the problem is that the typhoon continues to move north and the speed is very strong, but the strength of the typhoon is fortunately weak.

The intensity of the typhoon is now 18 m/s in the case of Ohmais, which is the weakest stage among the 5 typhoon stages, so there seems to be no major damage so far.

Q. Where is the current typhoon location?

The typhoon is currently located in the center of the sea 100 km south of Jeju Island.

However, if you take a look at the satellite imagery, you can’t see where the typhoon is at all.

On the other hand, if you look at the radar, you can see the tornado structure characteristic of typhoons. As the structure of the typhoon is getting weaker like this, it will now land on the southern coast of Korea around midnight.

It is expected that from this time on, it rapidly weakened into a temperate cyclone.

After that, it is expected that it will probably disappear near Daegu at dawn, but now there are rain clouds visible above the typhoon, and this is the rainy season front.

Q. Will it rain after the typhoon disappears?

Now let’s take a look at the wind map together.

This is what the wind map looks like until tomorrow in our country, and now you can see the typhoon gradually moving towards the east coast.

In the process, the rain continues to fall, and the problem is now the low pressure in the north of China, and even if the typhoon escapes, you can see that the rain that appears in green and red continues to fall.

This story is that there is a barometric pressure that affects Korea even after the typhoon, and that is the low pressure developed in China.

So, in Korea, heavy rain is expected until tomorrow with the effects of typhoons and low pressures added.

Q. What is the expected precipitation?

Now let’s take a look at the estimated precipitation for tomorrow.

With the monsoon front, low pressure, and typhoon I mentioned earlier, it will rain until tomorrow in our country.

First of all, in the case of the southern region, which is directly affected by the typhoon, there are places where it rains 100mm~300mm, and in the southern coast it rains more than 400mm. 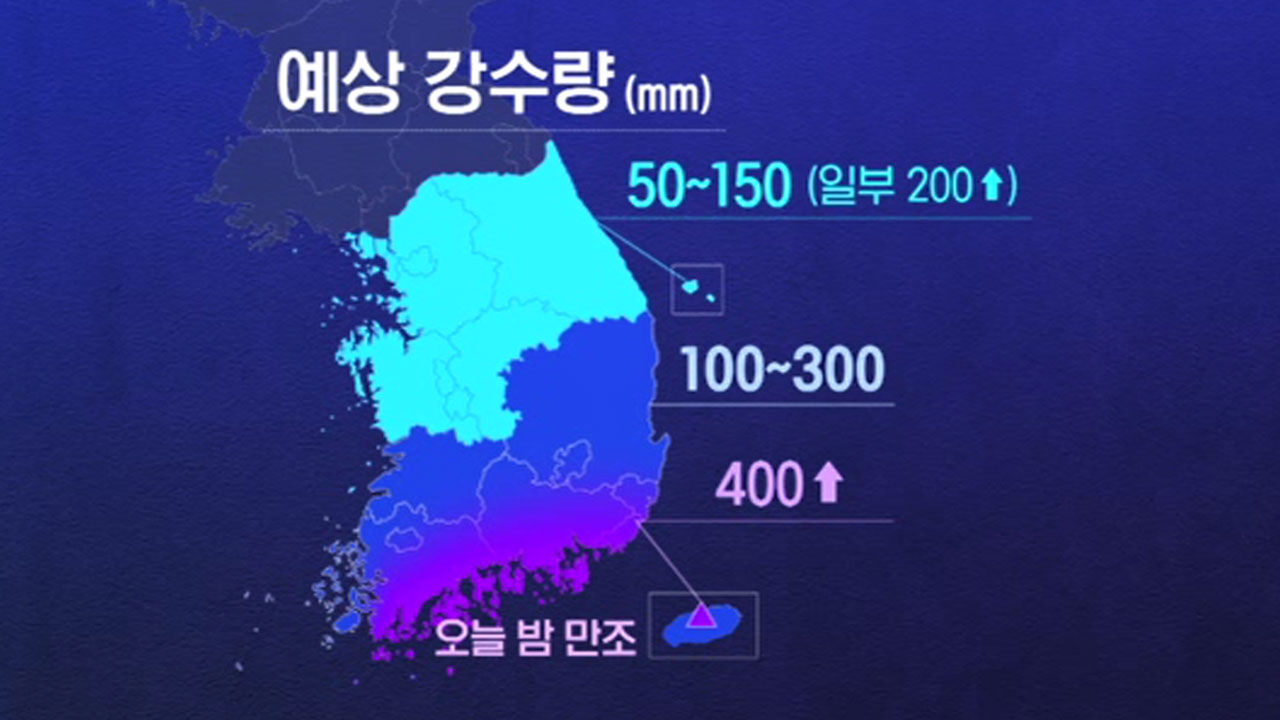 Especially in the southern coast area, tonight is the high tide.

However, in the case of the metropolitan area, as the rainy season front and low pressure that we saw earlier pass through, it will rain 50mm to 150mm until tomorrow, and there will be localized rain of 200mm in some areas.

So far, we have told you about the typhoon situation.

‘Suchart’ defeated Lue, there was no way to...