Top Posts
Today is the day!! You are loved #love...
csk week uae ipl Chennai Super Kings next...
I secretly like my best friend but he...
It was a coincidence that the new legend...
[Evaluation]ASUS ZenFone 8 Flip out of the box...
The Coast Guard caught cannabis cultivation in the...
Myanmar coup leader Self inaugurated as prime minister…...
“The more you drink, the more you risk”...
East Olympics 8.2 News ︱ Cuban wrestling star...
[휴지통]”Actor Kim Yong-geon, forced to have an abortion”...
Home Business ‘This time, it is a small apartment with less than 100 million won’ Pyeongtaek and Siheung Shaking up expeditionary gap investment
Business

‘This time, it is a small apartment with less than 100 million won’ Pyeongtaek and Siheung Shaking up expeditionary gap investment

Although the government is pouring out various real estate regulations by stipulating that real estate transactions that are not for the purpose of real residence are ‘speculations’, gap investment, which digs into loopholes in regulations, is prevalent across the country.

‘Little apartments’ with an official price of less than 100 million won are the main targets of Gap investment. The increase in the Jeonse rate (the ratio of the Jeonse price to the sale price) as the nationwide apartment Jeonse price soared as the government’s overlapping regulations such as the ‘Lease 3 Act’ acted is also the cause of the influx of Gap investment. This is because, in many places, the Jeonse rate has risen to 80-90%, and short-term market gains can be expected with a small investment of 10 million to 20 million won.

According to the results of the JoongAng Ilbo’s analysis of the real transaction price disclosure system of the Ministry of Land, Infrastructure and Transport on the 26th, the transaction volume of small apartments worth around 100 million won is rapidly increasing in small and medium-sized cities in local areas.

In the case of 38.49㎡ for Samjeong Green Core in Baebang, Asan-si, Chungcheongnam-do, where 289 transactions were made in one complex this year, the sale price is 60 million won to 92 million won, but the jeonse price is 60 million to 80 million won. According to Asil, a real estate information company, the ratio of ‘gap investment’ in this apartment over the past six months was 17.6%. In Sinbang-dong, Dongnam-gu, Cheonan, Chungcheongnam-do, an exclusive area of ​​39.27㎡ was also traded in 261 cases this year. The average transaction price is 66.63 million, and the jeonse rate reached 86% (based on KB real estate), making it a target for gap investment. 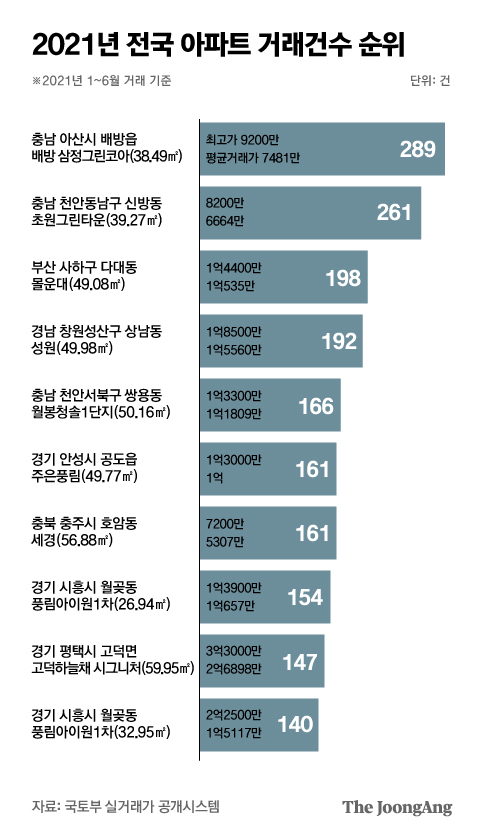 This phenomenon has recently been observed in some metropolitan cities as well. In the case of 2,960 households, Molundae Green Beach Apartment in Dadae-dong, Saha-gu, Busan, with an exclusive area of ​​49.08㎡, 197 cases were traded this year, of which 82 cases were traded in June. Of these, 13 were intensively conducted on June 18 and 19. 138 transactions were also made this year for 34.65 square meters of New Seoul Apartment in Mansu-dong, Namdong-gu, Incheon, where the average transaction amount does not exceed 100 million won (99.63 million won).

Experts analyze that it is a typical ‘balloon effect’, in which abundant liquid funds in the market are concentrated in the metropolitan area and regulatory blind spots. According to the real estate agency’s apartment purchase transaction volume by residence, the proportion of apartments purchased by residents in other areas in the first quarter was 27.3%, the highest since 2006 when related statistics were first compiled. It increased by 2.3 percentage points from 4.9 percent in the fourth quarter of last year.

Apartments with an advertised price of less than 100 million won received attention after the introduction of a heavy tax on the acquisition of multiple houses as a measure against July 10 last year. This is because, on the basis of the area subject to adjustment, an 8% acquisition tax is levied on two houses and 12% on three or more houses, but only 1.1% is applied to apartments with an official price of less than 100 million won, regardless of the number of existing houses. The fact that it is possible to avoid heavy transfer tax on single-family and two-homeowners is also a factor driving demand. Even if you purchase a small apartment outside of the metropolitan area, metropolitan city, or Sejong city while you already have one house and become a second home owner, if you first sell the small apartment with a published price of 300 million won or less, the transfer tax will not be levied.

Recently, online real estate cafes, etc. have been posting a lot of articles introducing or inquiring about places where ‘small apartment’ gap investment is possible. According to the real estate industry, in some cases, several investors who met through paid real estate lectures gather and hire buses to tour small and medium-sized cities in the region.

Many experts point out that it can be a risky investment. Seo Jin-hyeong, president of the Korean Real Estate Association, pointed out, “If you make a ‘don’t ask’ investment after only pursuing short-term market price gains without a sufficient understanding of the local economy, there is a high possibility of incurring a loss like a ‘can jeonse’.” ‘Jeonse in cans’ refers to the state in which the deposit for Jeonse exceeds the sale price and the deposit cannot be returned after the contract for Jeonse is terminated. During the 2008 financial crisis, apartment prices fell, causing damage from ‘can charters’.

In particular, local small and medium-sized cities are experiencing a marked decline in the population, so if the demand for foreign investment goes out at once, local end-users can suffer greatly.

[Evaluation]ASUS ZenFone 8 Flip out of the box...

Direct sales revenue does not include the “mystery”...

Despite the prediction of a rate hike… Variable...

January 1, 2021
We use cookies on our website to give you the most relevant experience by remembering your preferences and repeat visits. By clicking “Accept All”, you consent to the use of ALL the cookies. However, you may visit "Cookie Settings" to provide a controlled consent.
Cookie SettingsAccept All
Manage consent