Tied up, beaten, and abused at daycare centers in China 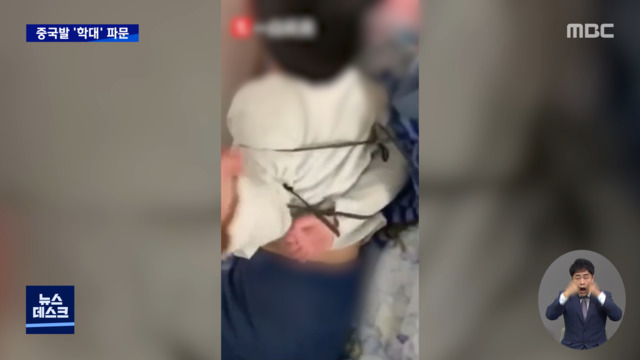 In China, child abuse videos at daycare centers have been released one after another, causing outrage.

Unlike Korea, China does not have a child abuse punishment law, so there are no measures to protect children from severe abuse.

There is a growing demand for urgent amendment of the law.

On the 17th, a daycare center in Qidong, Jiangsu Province, southeast China.

A child is crying in pain with her hands bent back.

If you look closely, your broken arms are tied to a rope and the rope is fixed to a doorknob.

You can also hear the laughter of the nursery teacher taking the video.

As I walked over the blanket next to me, another child was lying tied to a rope.

Playfully grabbing his arm and turning the child over, the child cries as if in pain.

This time, the nursery teacher’s laughter bursts out.

Chinese netizens demanded severe punishment, saying, “You’re a devil,” “I insulted my job as a teacher,” and “How can you be so cruel?”

As the controversy grew, public security arrested three people from the daycare center and is conducting an investigation.

At a kindergarten in Henan on the 2nd, a video of a teacher abused a girl sitting in the classroom by pushing it down and sprinkling water from a cup was released on the 2nd, causing controversy.

“I think the teacher is angry because the child is rude. I also don’t understand[the teacher]well.”

In China, videos of abuse of childcare facilities erupted about once a month in China, such as beating children for not eating properly in April and beating children in a group for no apparent reason in May.

As such, cases of child abuse at daycare centers and kindergartens are occurring one after another, but the countermeasures against them are insignificant.

This is because, unlike Korea, which has a child abuse punishment law, China does not have a separate law to punish child abuse.

According to the Criminal Code, abuse is punishable by a fixed-term imprisonment of 7 years only if the victim dies.

For this reason, even when the authorities conduct an investigation, there are many cases where it is merely an administrative action, and there is a growing demand for the revision of the related laws.

This is Heehyung Cho from MBC News in Beijing.