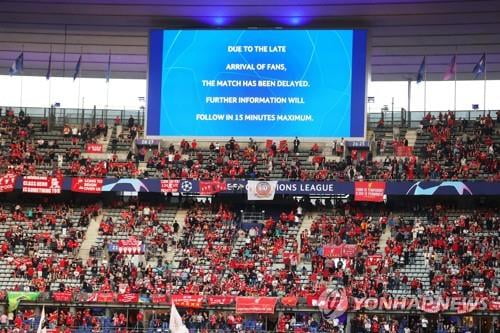 Liverpool fans, a professional football player in England, testified about the embarrassing moment they had before the Champions League final of the 2021-2022 UEFA Champions League at the French Parliament on the 21st (local time).

According to the British daily The Guardian, Liverpool fans attended a hearing held by an inquiry committee made up of French senators on the same day and testified that they were attacked by both local youth and the police on the 28th of last month, when the UCL final was held.

In the final held at the Stade de France, a stadium on the outskirts of Paris, Real Madrid defeated Liverpool 1-0 to win the championship.

However, the match started 30 minutes late due to chaos outside the stadium.

Police believed that some Liverpool fans had tried to enter the stadium without a ticket.

In the process, tear gas and pepper spray were sprayed even towards children and the disabled.

In response, British media pointed out that the local police, who had carried out an “excessive crackdown,” tried to cover up the robberies and thefts committed by hundreds of local youth at the time by making Liverpool fans a scapegoat.

French authorities have always blamed Liverpool fans for the cause of the commotion, but Liverpool fans countered that it was due to local robberies, organizational problems and excessive police response.

In the end, on the 9th, Paris Police Commissioner Didier Laleman admitted that he had reacted incorrectly at the time of the Senate hearing, but the activities of the senators who have been investigating since then have continued.

On the 15th, senators also questioned why a police video showing a police officer spraying pepper spray on fans was deleted.

At the hearing on the 21st, Joe Blott, president of ‘The Spirit of Shankley’, a large Liverpool supporter, said the police officers had been showing hostility from the moment the fans arrived in Paris.

Ted Morris, an executive at the Liverpool Supporters for the Disabled, also pointed out that it was the fans, not the police, who were working hard to prevent a major accident at the scene. “The French authorities should be ashamed.”

“I was treated with contempt,” he added.

Real Madrid fans, who faced Liverpool in the match, also added their voices at the hearing.

Emilio Dumas Kremer, who was present at the scene, testified that the police stood by while a group of young local robbers were stealing cell phones, wallets and bags from Real Madrid fans.

“Liverpool fans were pacifists and did the right thing,” he said.

Republican Senator François Noel Buffet, who presided over the hearing, said Liverpool fans should not be blamed for the riots.

Members of the investigation committee will announce their conclusions on the situation on the 22nd, the next day.

There has also been a counter-argument that the scale of the ‘fake ticket’, which is one of the grounds that the French authorities have issued in condemning Liverpool fans, has been inflated.

France’s Interior Minister Gerald Darmanin said 30,000 to 40,000 Liverpool fans came to the stadium without tickets to the finals or with fake tickets.

“We know that about 2,600 fake tickets were presented at the entrance to the stadium,” said Martin Callen, head of UEFA’s operations division, on the 21st. retorted.