The tiger skin that Trump received while traveling to Saudi Arabia was found to be fake dyed during an investigation into possible violations of the Convention on International Trade in Endangered Species.

A tiger fur garment and a dagger with an ivory handle that Saudi Arabia gave to former US President Donald Trump were later found to be fake. The New York Times (NYT) reported on the 11th (local time) that this fact was confirmed while the Office of the Inspector General of the United States was tracking the status of gifts received from foreign governments by key Americans during the Trump administration.

Saudi Arabia handed out 82 gifts when Trump visited Saudi Arabia in May 2017, shortly after taking office. These ranged from ordinary gifts such as women’s scarves and sandal shoes to three pieces of clothing made of white tiger and cheetah fur and ivory-handled daggers. Saudi Arabia is known to have put a lot of effort into the gift considering that former President Donald Trump chose his country as his first overseas visit since taking office. 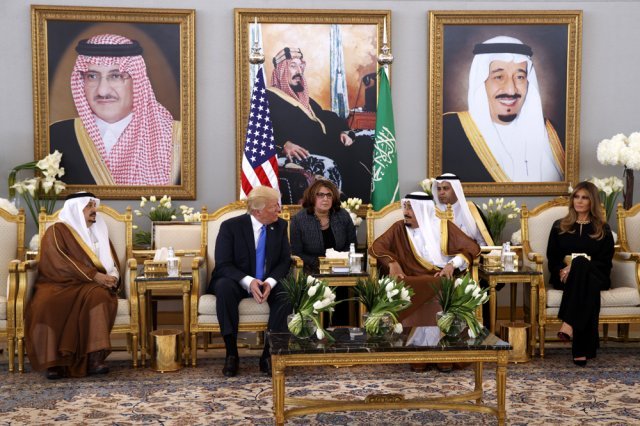 The White House legal team determined that white tiger fur clothing and ivory daggers could violate the Endangered Species Act, but Trump did not report the gift to the General Services Administration (GSA) until just before he left office. For this reason, these items were excluded from the gift items received from foreign governments. The White House transferred the tiger fur clothing and ivory dagger to the GSA only on January 19 of this year, just before Trump’s resignation, and it was not until the summer of this year that the Fish and Wildlife Service (USFWS) checked whether there was a violation of the Endangered Species Act. was handed over to The USFWS’s investigation into the gift’s law revealed that the fur was a fake leopard print, and the ivory was a imitation made from animal bones. A gift from the royal family, which has billions of dollars in assets in oil-rich Saudi Arabia, was not genuine. The Saudi embassy in the US declined to respond to a NYT inquiry about the outcome. It is not known whether Saudi Arabia was aware of this when handed over the gift. “The exchange of gifts between foreign leaders and the United States is a very controlled process, but under the Trump administration, it shows that even this can at times become absurdly staggering,” the New York Times said. “Whether it’s indifference, sloppy work, or a major robbery, this shows a problem with government processes and attitudes to the law,” said Stanley Brand, a former U.S. House Ethics Attorney. The Office of the Inspector General of the State Department has previously been investigating expensive foreign gifts that were not properly registered with the Federal Bureau of Investigation, including the $5,800 whiskey that disappeared after former Secretary of State Mike Pompeo was given a gift in Japan. Former White House national security adviser John Bolton reportedly received a 22-carat gold coin and a porcelain bowl from Vietnam, but the whereabouts are still unknown. Karen Pence, wife of former Vice President Mike Pence, refused to pay anything over the cap ($415) after receiving two gold business card wallets from the Singapore prime minister. Karen Pence received confirmation from the White House legal team at the time that the $390 business card holder was acceptable, but the total value of the gift, including the clutch wallet it contained in, reached $1200.

President Moon asks for support for end of...

Sudanese coup: when the army no longer wants...

Woman arrested for trying to bring down painting...

Biden announces the framework of a $1.75 trillion...

Global warming: what is eco-friendly sex? Can it...

| The new champion is known today;...