Tucao Chen Kaige, the owner of station B said he was reported, and the law firm responded: zero tolerance for “personal attacks” |

On January 6, a number of site B up hosts (referring to people who upload video and audio files on websites such as videos) posted a message saying that their tucao video about Chen Kaige was reported by Chen Kaige. Soon, #陈凯歌 reported spit on his own up main # topic and rushed to the hot search on Weibo. 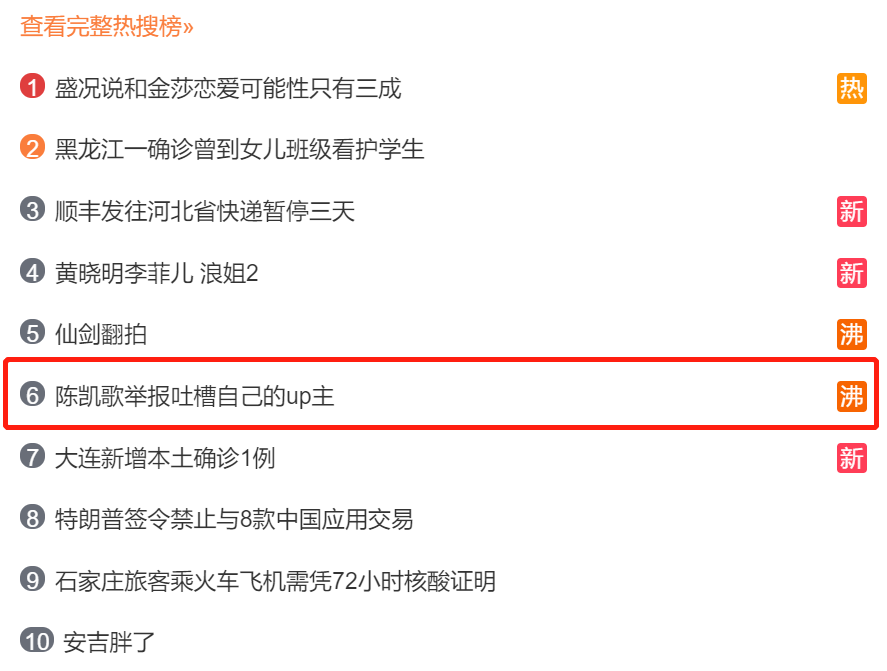 In this regard, on the 6th, Beijing Xingquan Law Firm issued a statement stating that the complaints and reports involved in the topic were carried out by the law firm on behalf of Director Chen Kaige.

Well-known up said he was reported by Chen Kaige

Starting from January 5th, some up owners have stated that their previous Tucao videos have received reports from Chen Kaige’s team.

The well-known up host @老邪说电影 at station B also believes that the Chen Kaige team’s reasons for reporting were copied and pasted. 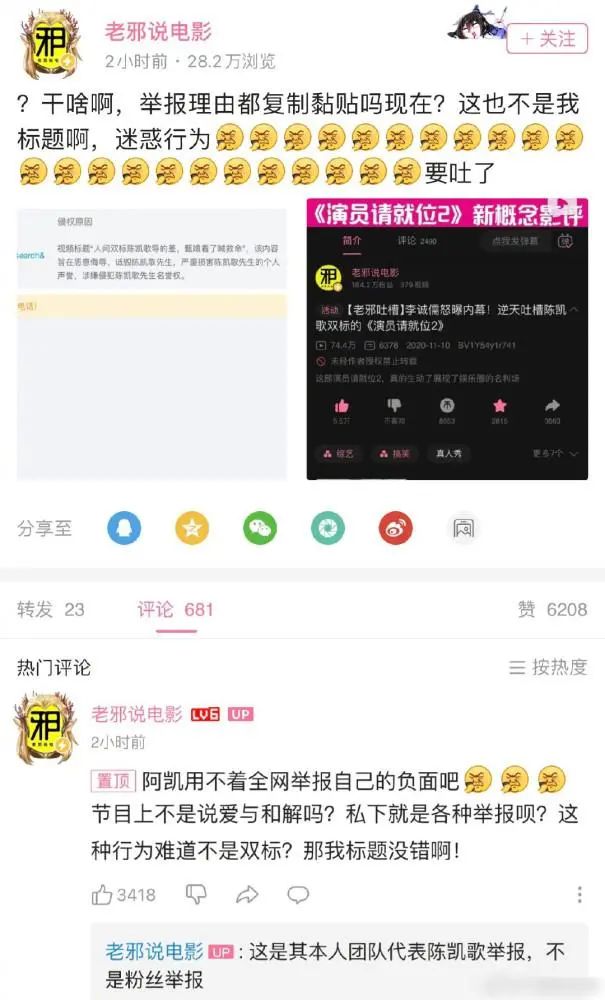 Among the group of up owners who claim to have been reported, there is also the well-known film and television up owner “Xuan Miao Elias”. Xuan Miao Elias has 691,000 fans on station b. His work “The Revealed Chen Kaige, An Ultimate Guo Jingming” currently shows 1.49 million views. 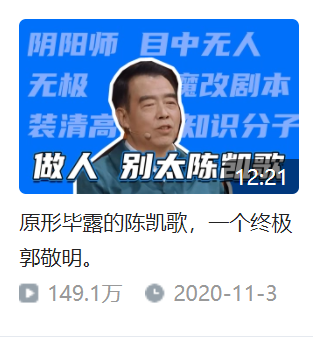 It is worth noting that not only some well-known up owners with a large number of fans, some up owners with only a few thousand fans also claimed to have received reports and complaints.

The up host named “I am the little flower of my motherland” said in the video: “My video has only 10,000 views, and I don’t even have 6,000 fans, so I can still have a relationship with Director Chen. Thank you Director Chen for letting me know the majesty of the law, and finally apologize to Director Chen…”

On the evening of January 6, Beijing Xingquan Law Firm issued a statement stating that the complaint and reporting involved in the topic was carried out by the law firm on behalf of Director Chen Kaige. The complaint did not address the content of the relevant Internet users’ evaluation of director Chen Kaige’s work. In response to publicly released remarks by relevant Internet users on suspected personal attacks on Director Chen Kaige. The statement also stated that Chen Kaige accepts all comments from the audience on his works, especially critical comments on his works.“However, director Chen Kaige always adheres to the attitude of’zero tolerance’ for personal offensive remarks that exceed the scope of public figures’ tolerance obligations.”。 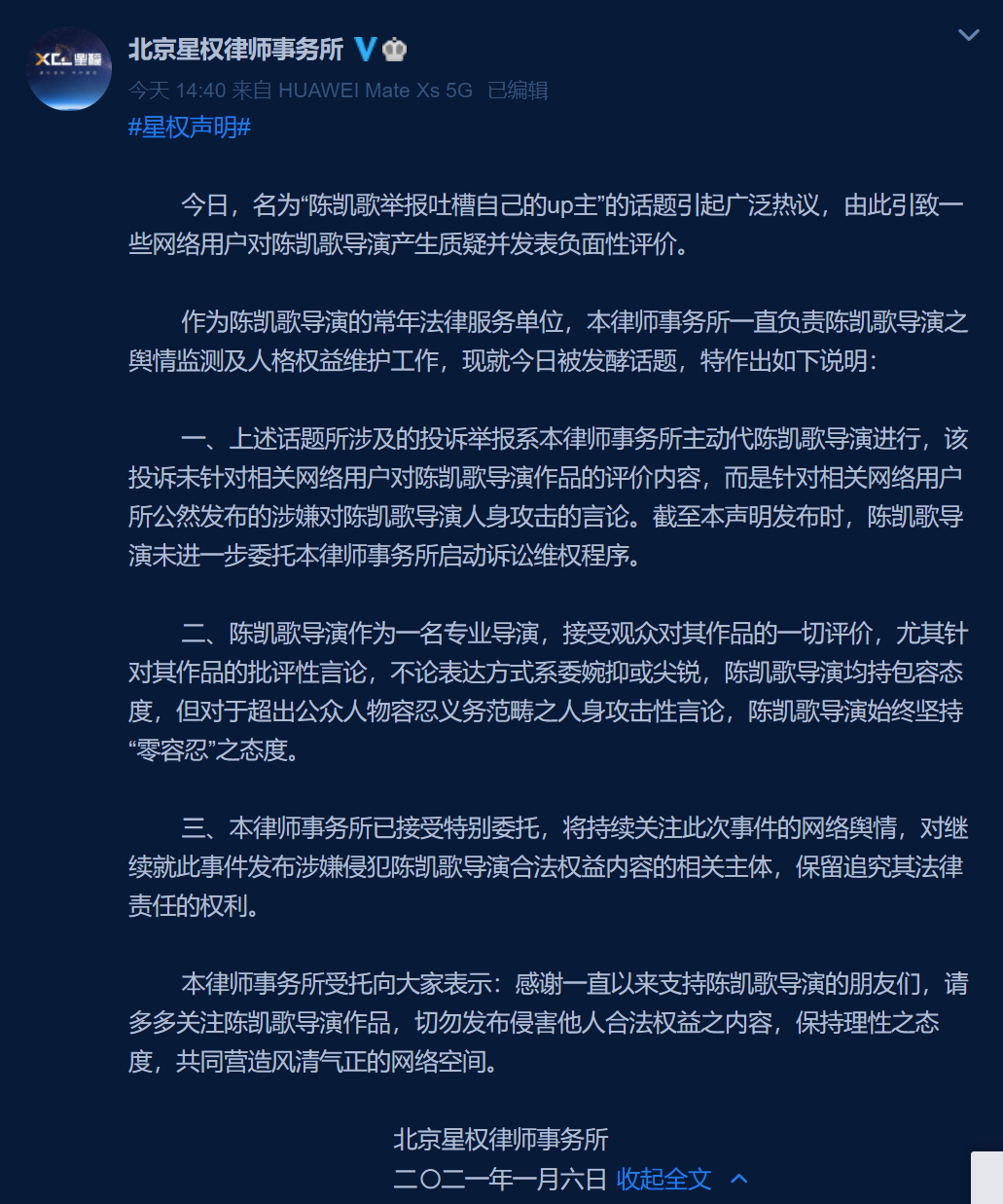 In addition, the law firm will continue to pay attention to the online public opinion of this incident, and reserve the right to pursue legal liabilities for relevant entities who continue to publish content suspected of infringing on the legal rights of director Chen Kaige.

According to Red Star News, regarding this incident, Wu Yinzheng, a lawyer from Sichuan Jianfa Law Firm, said that the criticisms that named the surname and were obviously subjective in the video were suspected of infringing on Chen Kaige’s right of reputation, and in serious cases may constitute defamation. . In addition, the video source of the clip is “I Am an Actor 2” program. If the up owner makes a profit from this video, it is also suspected of infringement. 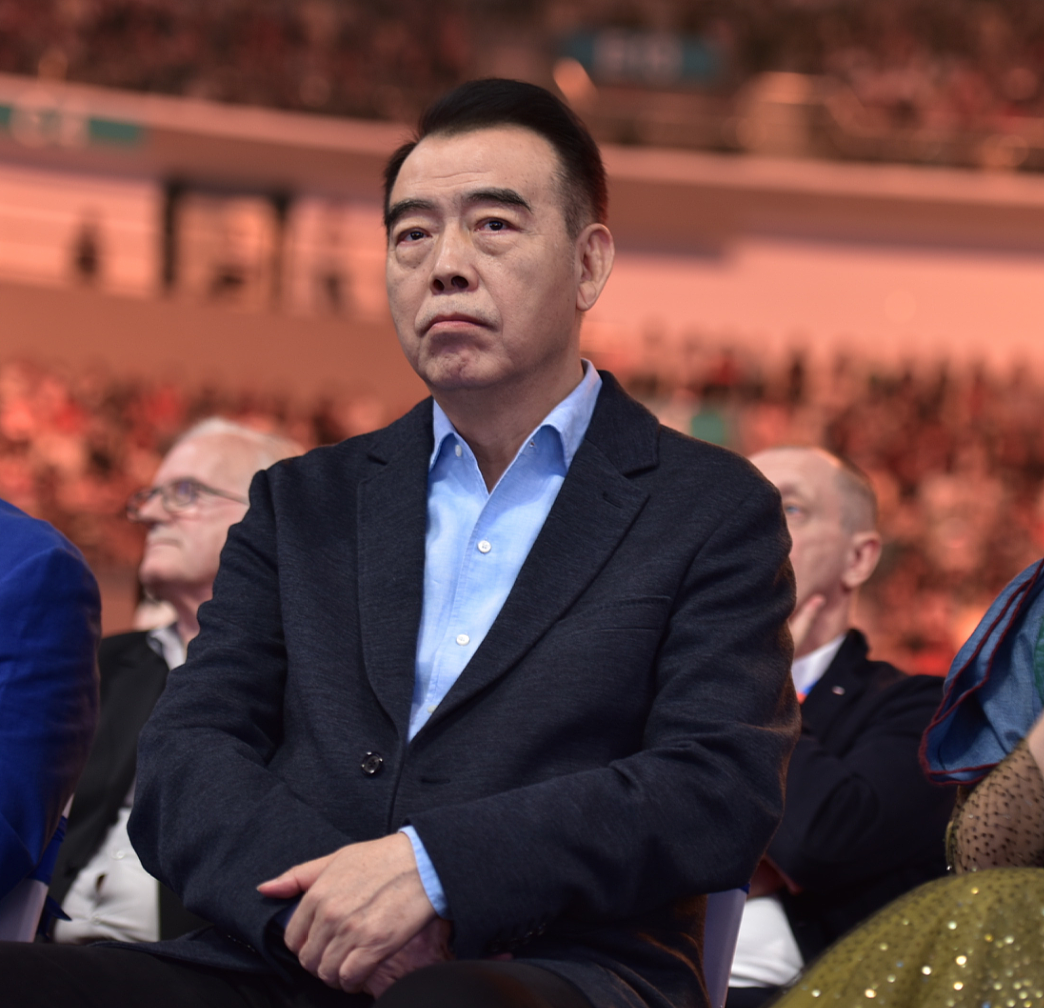 Chen Kaige was complained for in variety shows

Most of the videos in this wave of complaints used the variety show “Actors Please Take Part 2”, which Chen Kaige participated in in 2020, as the editing material. Taking “Chen Kaige Revealed, An Ultimate Guo Jingming” as an example, up master Xuan Miao Elias believes that Chen Kaige’s words about his own work and the actors he brought in the show are all beautiful words, but when he evaluates other people’s works, he begins to make sense. The offender. In the commentary section, the up host pointedly pointed out that Chen Kaige and Guo Jingming were “raccoons of the same hill”, indicating that Chen Kaige “double-labeled looks really like Guo Jingming”.

Similar videos are not difficult to reminiscent of “A bloody murder caused by a steamed bun” in the early years., Hu Ge, the video author at the time, was sued by Chen Kaige for spoofing Chen Kaige’s film “Promise”. UP Master Xuan Miao also sighed at Station B, “Who would have thought that I would get the same treatment as Hu Ge back then.”

Chen Kaige’s frequent “out of the circle” has aroused heated discussions for many times. When talking about the bad reviews of “The Promise”, Chen Kaige also emphasized that he “accepts all criticisms of his films.” 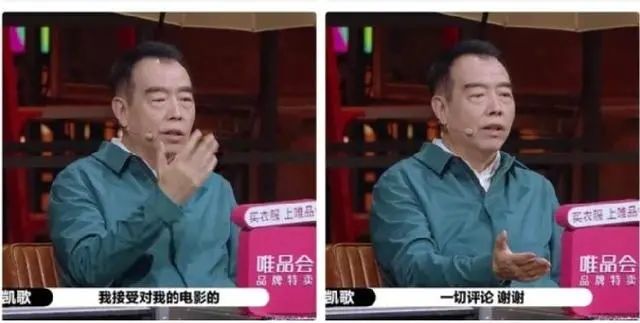 However, some of the complained videos do have excessive words.For example, the use of qualitative words such as “beautiful”, “inconsistent”, “self-contained”, “reverse black and white” and other qualitative words to describe Chen Kaige，There are indeed suspicions of infringement of reputation rights.

It is worth noting that as early as March 2018, the State Administration of Radio and Television has issued the “Further Regulation of the Order of Online Audiovisual Program Dissemination”, which clearly stated that “some programs intercept and splice classic literary works, radio, film and television programs, and original online audiovisual programs without authorization. The fragments of the program, or re-dubbing or re-subtitles, attracted attention by tampering with the original intent, taking out of context, spoofing, etc., and produced extremely bad social effects.” The document requires,Resolutely prohibit illegal capture, editing and adaptation of audiovisual programs. It is not allowed to re-edit, re-dubb, or re-subtitle classic literary and artistic works, radio, film and television programs, and network original audio-visual programs without authorization, and it is not allowed to intercept several program fragments and splice them into new programs for broadcasting.

On January 9, 2019, the official website of the China Network Audiovisual Program Service Association published the “Online Short Video Platform Management Regulations” and the “Online Short Video Content Review Standard Rules” to further regulate the order of short video transmission. It is mentioned in the article that online short video platforms should perform their copyright protection responsibilities and must not cut or adapt movies, TV series, online movies, online dramas and other radio and television audiovisual works without authorization. 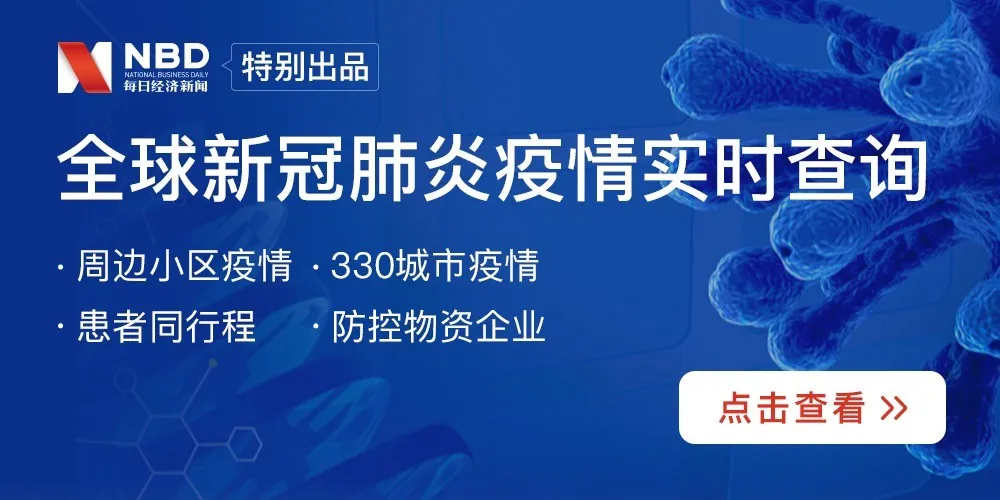 For more financial events, please follow the video below! 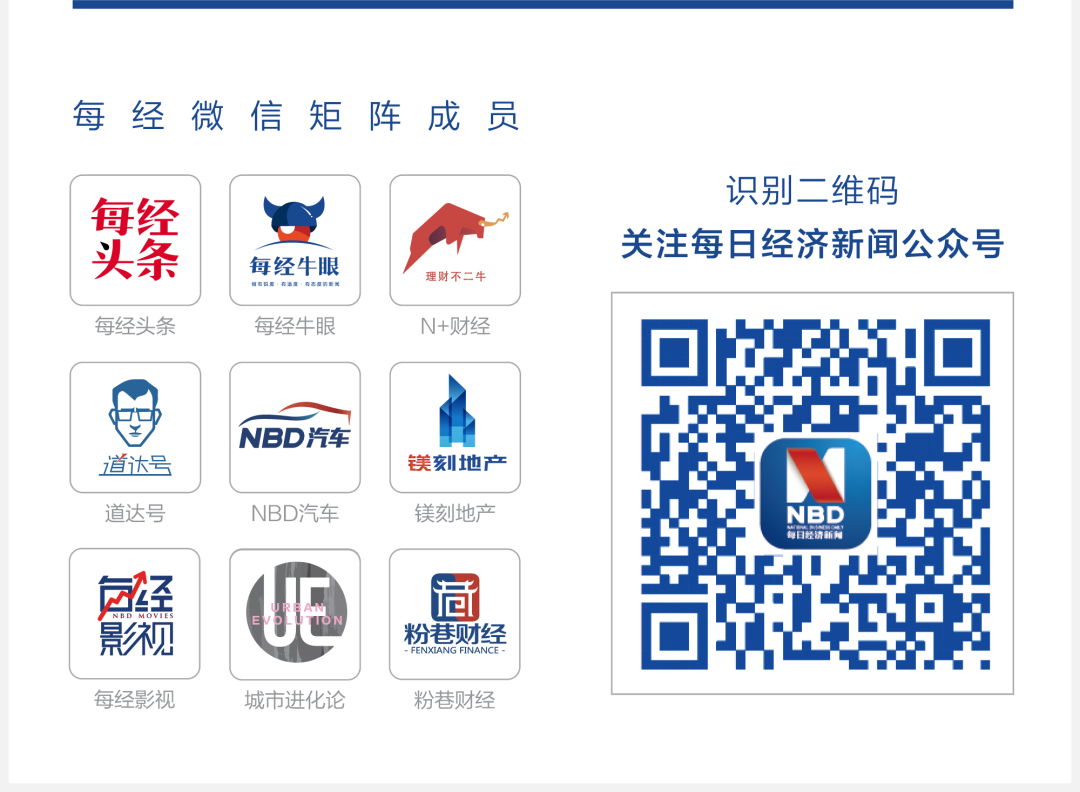 Go to “Discover”-“Take a look” and browse “Friends are watching”

Go take a look Take a look at the entrance is closed Open the “Take a Look” entry in “Settings”-“General”-“Discovery Page Management”, I know

cancel Send it to look at it and send Tucao Chen Kaige, the owner of station B said it was reported, and the law firm responded: zero tolerance for “personal attacks” Up to 200 characters, currently total characters

Lee Sung-kyung doesn’t use that expression when...