A forest fire is spreading at a coal-fired power plant in Milas, Turkey, on the 4th. Milas = AFP Yonhap News

As the massive wildfire in southern Turkey continues for the eighth day, public opinion criticizing the government’s sluggish suppression and incompetence is growing. As the battle for responsibility continues within the political arena, there is even a prospect that a fire may shake the position of the authoritarian ruler Recep Tayyip Erdogan. Wildfires are spreading to the political realm.

According to foreign media such as the New York Times (NYT) on the 4th (local time), the momentum of a large-scale wildfire that started in Antalya Province in southwestern Turkey on the 28th of last month is still not dampened. The flames spread rapidly to nearby areas due to strong winds and dry weather, and hit even a coal-fired power plant in Milas, a coastal city in the Aegean Sea. The state has evacuated residents and emptied hydrogen tanks ahead of time, but thousands of tons of coal have been ignited and have gone out of control. So far, eight people, including two firefighters, have lost their lives. Turkey’s Interior Minister Suleiman Soylu said that “3,219 households and 16,603 people in 28 regions were evacuated because of the fire.”

It is the government’s inadequate response that makes the Turks as difficult as the uncontrollable flames. In fact, this wildfire is heavily influenced by record heatwaves and strong winds caused by climate change. Not only Turkey but also southern European countries such as Greece are struggling day after day due to wildfires caused by hot air blowing from North Africa. It is difficult to blame the fire solely on the government. 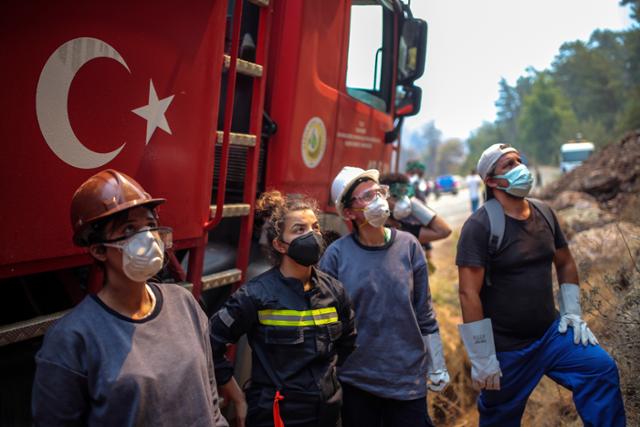 Volunteers look at the scene of a fire with dismayed expressions in the village of Turgut, Mugla province, Turkey, on the 4th. Mugla = AP Yonhap News

However, the Turkish people think that the government’s response turned a genius into a man. After the actual fire, the government’s incompetence and vainness are being revealed day after day. Turkey expert Asli Aydintasbas, senior researcher at the European Commission for Foreign Relations, told the Washington Post, “Unlike Greece, which has 39 firefighting planes, Turkey does not have one. pinched. At the beginning of the fire, even Israel and Western countries, which have an uncomfortable relationship with Turkey, offered support, but there was also a report (AP) that the Erdogan government refused, saying “the situation is under control.”

People who have lost their livelihood in an instant are only experiencing frustration. The loss more than doubled because of no government help. “I called the authorities and asked for help, but nothing came,” said Nebjat Ildirim, 30, a resident of Bojalan village in Mugla province. In the end, I had to protect myself by myself,” he told The Associated Press. The British daily The Guardian reported that “the less fortunate residents are starting to put out the fire by filling everything possible, from household buckets to cement mixers.”

On social networking services (SNS), there are not only appeals to ‘help Turkey’, but also posts criticizing President Erdogan’s incompetence. On Twitter, he wrote, “Even though the fire has spread to the front of the house, there is not a single fire engine nearby. A video of a Turkish man urging him to resign if he has any fear of his conscience is spreading rapidly.

Eventually, the controversy spread to politics. “Erdogan failed to put out the fire,” said Kemal Klzdaroulu, head of the Republican People’s Party (CHP), the main opposition party in Turkey. He lacks a basic plan for the situation and is ignoring global warming warnings.” Saeruhan Oluk, a lawmaker from the second opposition People’s Democratic Party (HDP), also added, “The scale of this disaster has grown due to the lack of preparation for (wildfire), including the possession of firefighting aircraft, and the government’s negligence.”

On the other hand, pro-government figures opposed the opposition’s use of forest fires as a tool of political strife for political gain. President Erdogan also expressed his anger at the opposition, saying, “Politics should not intervene in a situation where wildfires are spreading.” Turkish authorities are also looking for a scapegoat to hold the fire responsible. He even raised suspicions of intentional arson by the Kurdish Workers’ Party (PKK), an armed Kurdish separatist group in his country. It means that the anti-government group engaged in sabotage.

Anyway, this situation is expected to act as a significant burden for President Erdogan, who dreams of becoming a ’21st century sultan’ and strengthens authoritarian rule. According to the New York Times, “Erdogan has been pushed into a political crisis due to the chronic economic hardship and the spread of the novel coronavirus infection (COVID-19), followed by a large wildfire.”

Jin Jung-kwon in front of Kim Eui-gyeom, “Is the Hankyoreh eligible for compensation for ‘sexual hospitality’?”

Advanced missiles such as SLBMs, Army Tigers… The...

Sharjah Police with awareness on the latest methods...

The body was found in a pond

July 29, 2021
We use cookies on our website to give you the most relevant experience by remembering your preferences and repeat visits. By clicking “Accept All”, you consent to the use of ALL the cookies. However, you may visit "Cookie Settings" to provide a controlled consent.
Cookie SettingsAccept All
Manage consent