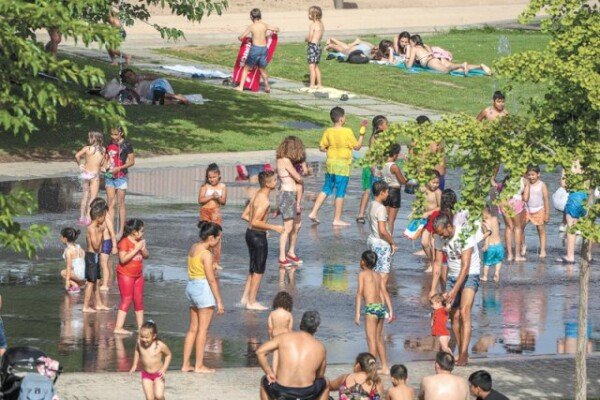 Beginning in the northern part of the United States, the ‘Twelve Dome’ is east-south, with a third of the population affected by the heat wave
Thousands of cows killed in Kansas First heatwave in 75 years in France
In the Arctic, the temperature is 3 degrees higher than normal, “the heat wave is 100 times higher because of greenhouse gases”
Many children cool off from the heat in a fountain in a park in Madrid, the capital of Spain, on the 17th. In Spain, where an early heat wave is rampant recently, the temperature soared to 43 degrees Celsius. In the United States, France, India and other parts of the world, an unusual heat wave appeared in June, raising concerns. Madrid = AP News

A large ‘heat dome’ has formed throughout this summer amid a recent heatwave across the United States, and at least tens of millions of people are expected to suffer from ‘cauldron heat’. As temperatures in the Midwest, including Nebraska, Missouri, and Kansas, crossed 37 degrees Celsius, a herd of 2,000 cattle died in Kansas. As the atmosphere around the thermal dome becomes unstable, extreme weather events such as heavy rain and tornadoes occur one after another.

In addition to the US, there are concerns that an abnormally high temperature, close to a disaster, has begun, with heatwaves rampant around the world, including India, France, and Spain.

○ One-third of the US population is affected by heat waves

According to CNN on the 18th, the U.S. Meteorological Administration predicted that a huge thermal dome, which is currently resting on the plains around the Northern Great Lakes, is moving eastward, leading to record heatwaves in several areas. Earlier on the 13th, the National Weather Service (NWS) issued a heat wave advisory for the Great Lakes, the southern Gulf Coast, and southeastern North Carolina, and advised 17.5 million residents to refrain from going out and stay indoors. Two days later, on the 15th, it was revealed that a third of the US population (125 million people), including these areas, were affected by the heat wave.

Officials in Kansas said on the 16th that about 2,000 cattle died from high temperatures. In a video posted on social media, cows can’t stand the scorching sun and are spread out with their legs outstretched toward the sky.

Recently, drought and fire warnings have been issued one after another in southwestern Arizona, New Mexico, and Colorado. On the other hand, heavy rains and tornadoes raged in Illinois and Indiana, causing large-scale blackouts in some areas.

○ Europe and India also moan at the higher temperature

The situation in major European countries is also dire. In Spain, the temperature exceeded 40 degrees at the beginning of this month. In some parts of the south, temperatures rose to 43 degrees. The highest temperature on the 15th in Madrid, the capital, also recorded 40.5 degrees. The UK Meteorological Agency has issued a ‘heat health advisory’ in some areas, up to level 3 out of 4.

In France, the highest midday temperature exceeded 40 degrees in some regions on the 17th. This is a case of a ’40 degree heatwave’ at the earliest time of the year since 1947. Some city authorities have banned outdoor activities for citizens and canceled concerts and large gatherings “until the heatwave is over”. Indoor events were also banned in places without air conditioning. The Arctic was also observed to be about 3 degrees warmer than normal.

Read Also  WHO: Europe will soon enter the final stage of the COVID-19 pandemic

According to Bloomberg and others, the highest midday temperature in southern India recently exceeded 50 degrees. The average daily high temperature in Pakistan last month was 45 degrees.

Experts called for measures to be taken, saying that the warming and heat dome phenomenon is getting worse as the use of fossil fuels increases. Friederike Otto, a climate expert at Imperial College London, UK, pointed out that “the frequency of heat waves in Europe alone has increased by more than 100 times because of greenhouse gases.” World Meteorological Organization (WMO) spokeswoman Claire Nuliss said that “the heat wave is coming faster as a result of climate change.”