U.S. home prices rose 14.59% in April compared to the same month last year. This is the S&P Case-Shiller Home Price Index (national standard) released on the 29th of last month. That means home prices across the U.S. have risen by an average of nearly 15% in a year. On a monthly basis, this is the largest increase in 34 years since the start of compiling related statistics. The overheating aspect of the asset market is moving to housing, following stocks, cryptocurrencies, and commodities.

According to the Federal Housing Finance Agency (FHFA), home prices rose 15.7% in April. On a monthly basis, it was the highest in 30 years since 1991. According to the National Association of Realtors (NAR), the median home sale price in May was $35,300. For the first time ever, it crossed the $350,000 mark. The Wall Street Journal (WSJ) reported that “the recent rise in house prices has been faster than in the early 2000s.” 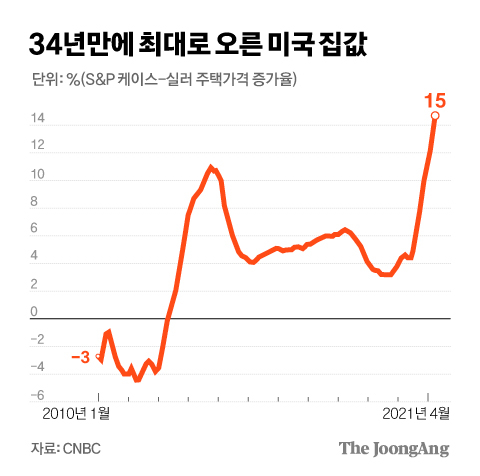 Yale University professor Robert Schiller, who invented the Case-Schiller index, said in an interview with CNBC that “house prices have never been as high as they are today, looking at any data in 100 years.” “It is similar to 2003, when housing prices peaked before the global financial crisis,” he said. At that time, house prices began to decline in 2005 and then plummeted in 2008,” he added.

In the United States, since the spread of the novel coronavirus infection (COVID-19), more and more people are moving away from crowded cities and moving to suburbs. However, new housing construction is not keeping pace with the increase in demand. The base interest rate (0-0.25% per annum), which is practically zero, and the interest rate on mortgages, which are at an all-time low, are also factors that raise house prices. Since the beginning of this year, the price of raw materials, such as timber, for housing construction has risen, also fueling the shortage of housing.

The U.S. Department of Commerce reported that new home supply (330,000 households) rose 5.8% in May from a year earlier. That’s not enough, US housing market experts said. Matthew Speakman, a researcher at Zillow, an American real estate information firm, said, “We can’t find any factors that will dampen the rise in house prices.” 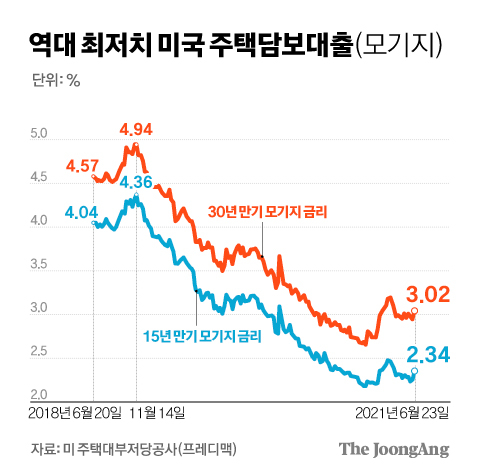 The U.S. central bank, the Federal Reserve, buys home equity securities (MBS) worth $40 billion every month. The 30-year U.S. mortgage rate stood at 3.02% a year on the 23rd of last month. This is the lowest level since 1973, when the related interest rate survey began.

The Washington Post (WP) said, “Wealthy people with cash mobilization have jumped into the housing auction market, raising house prices. “It has become difficult for people on a tighter budget to buy new homes.” Some housing market experts criticize the Fed for contributing to the surge in house prices. Even within the Fed, there are opinions about reducing the size of MBS purchases as part of ‘tapering’ (reducing asset purchases). Dallas Federal Reserve Bank President Robert Kaplan said the MBS purchases are fueling the rise in house prices. Boston Federal Reserve Bank President Eric Rosengren has called for a reduction in MBS purchases, saying, “We cannot afford to collapse after a bubble in housing prices.”

The US government’s concerns are deepening. President Joe Biden is investing huge amounts of money to promote economic recovery and job creation. If housing prices soar, the polarization of wealth deepens, and housing insecurity among the working class increases, it could negatively affect the economic recovery.

covid vaccine added 6,34,270 doses of vaccine to the state

Major Cineplex celebrates the opening of a new...

“President Boo-jin Lee was caught by a reporter’s...

Board of APURE green light to increase capital...

“The range of relatives subject to regulation should...

The designated version of the 16-inch MacBook Pro...

He said to wipe the tears of...