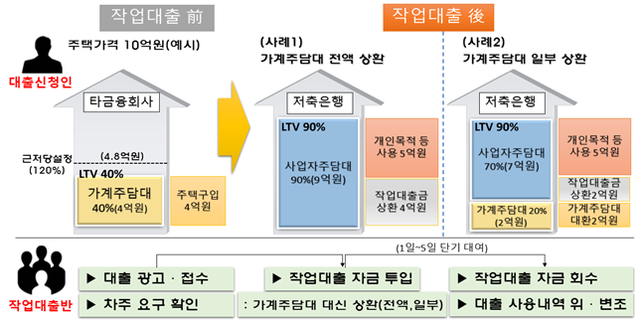 As household loan regulations in the financial sector have been tightened recently, expedient sales using business mortgage loans from savings banks, which are relatively weakly regulated, are still prevalent. Accordingly, the financial authorities decided to impose strict sanctions on business owners whose loans were used for non-business purposes.

According to the Financial Supervisory Service on the 21st, housing mortgage loans for savings bank operators (corporate and individual businesses) stood at 12.4 trillion won as of the end of March, up 1.5 trillion won from 10.9 trillion won at the end of last year.

There is no LTV regulation for business loans, and the credit limit (5 billion to 12 billion won) is higher than that of households (800 million won). In particular, the proportion of private business subsidies out of business subsidies is 83.1% (10.3 trillion won), which is increasing, led by sole proprietors.

In fact, the average LTV of savings banks’ business loans is 75.0%, which is higher than savings banks’ household loans (42.4%). Among all operators, the cases in which the LTV exceeds 80% account for 48.4% (6 trillion KRW) of the total, and the scale is continuously expanding.

Above all, the Financial Supervisory Service confirmed a number of cases in which the business loan organization intervened in the inspection process and treated the subcontractors unfairly through forgery and forgery of documents.

The working loan organization, which consisted of loan solicitors, approached financial consumers who had difficulties in borrowing through advertisements such as flyers and internet cafes. If the collateral value of the house is insufficient to obtain a household loan or it is difficult to explain the purpose of using the business loan, he led the way to create an unfair work loan by forging or falsifying documents necessary for the loan, such as an estimate or tax invoice, to be a normal loan.

In order to avoid regulations such as the LTV limit of household loans, the loan handling limit, and the total debt-to-income ratio (DSR) by borrower, it is a ‘trick’ to induce business registration and receive a subsidy.

Accordingly, the FSS plans to focus on the adequacy of credit review and follow-up management related to work loans during the inspection of savings banks, and severe sanctions will be imposed for violations. Furthermore, it plans to conduct an on-site inspection of loan solicitors in the second half of this year together with the Korea Savings Bank Federation.

An official from the Financial Supervisory Service said, “Severe sanctions will be imposed on loan solicitors involved in illegal work loans in accordance with relevant laws and regulations, and measures such as termination of the recruitment consignment contract and notification to investigative agencies will be actively pursued.” He could be punished as an accomplice,” he said.

Controversy in the musical world is calming down… Star fandom dependence needs to be improved
Posted onJune 26, 2022June 26, 2022
Menu