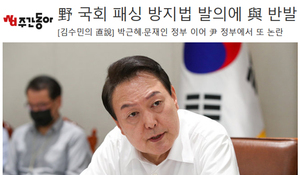 A weekly Donga article criticizing the Yoon Seok-yeol administration’s ‘passing the National Assembly’ is controversial because it was published without the author’s consent.

Mr. Kim has contributed articles to the weekly Donga section called ‘Kim Soo-min’s Direct Intent’. The column in which Kim took issue with the editing of the media was published online on the afternoon of the 20th and was titled “Revolt against the proposal of the Noo National Assembly Passing Prevention Act.”

“I don’t see any competitive qualities as well as the competitive ones. The ‘executive decree’ is a phenomenon that occurred one after another in the Park Geun-hye and Moon Jae-in administrations. There is only one word left to say, ‘the liquidation of the imperial presidential system’, and President Yoon seems to claim to be the successor of former Presidents Park and Moon. How about People’s Power Representative Lee Jun-seok and floor leader Kwon Seong-dong? Unlike Yoo Seung-min, the then floor leader of the Saenuri Party, who led the ruling and opposition parties to reach an agreement on the National Assembly Passing Prevention Act in 2015, he is putting the brakes on ‘prevention of passing the National Assembly’ rather than ‘soloing the enforcement order’. If important issues do not go to the National Assembly, the power of the party will weaken, and the ruling party will also be swayed by the administration and the presidential office. The struggle for the people’s power ‘Jinyun’ seems to be imminent. Right now, the ruling power is just doing ‘enforcement order’ politics.”

On the 21st, Mr. Kim posted on his Facebook page, “I think that I have been generally respected in the selection of topics, and there were columns that received a great response from readers or were memorable for myself. However, it cannot be overlooked that a significant amount of content has been deleted from this column without consultation. This deletion was made by a higher level, and I have not received any request for an award. There is no reason to contribute any more.”

According to Mr. Kim, Weekly Dong-A said that he heard reasons such as △ adjustment of the amount of contribution was inevitable due to special coverage in Ukraine and △ If Kim’s contribution goes out as it is, it could be misunderstood as the position of the media. Kim said, “I’ve been meticulously refining my own sentences and putting my heart into it to fit the short length. I also conveyed my position to Weekly Donga.” Weekly Dong-A editor-in-chief said in a phone call on the 22nd, “I have nothing special to say.”

Read Also  Sending a delegation to the U.S. Coordinating the ROK-U.S. alliance and North Korea issues

Did you properly reflect the fuel tax cut? The government checks whether the oil industry has collusion
Posted onJune 27, 2022June 27, 2022