“What if Yang Hyun-suk gave me 500 million won? If you were trying to get money, you wouldn’t have come this far.” 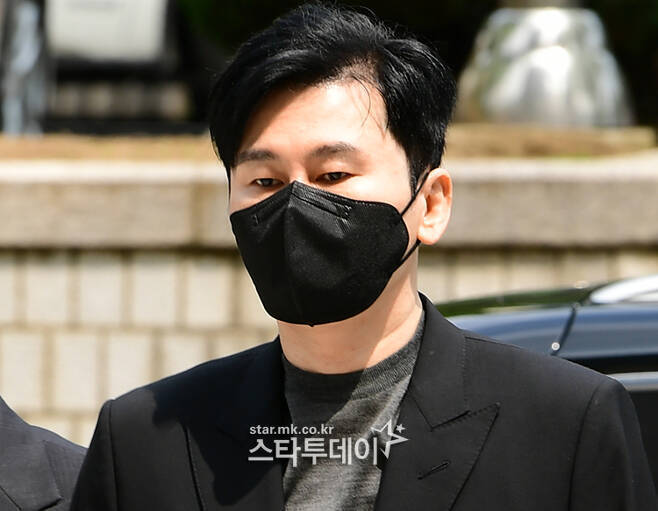 Yang Hyun-suk, former producer of YG Entertainment, raised suspicions that he reported it to Han Mo, who reported the allegation of retaliation in the public interest, for money. Mr. Han said, “I once mentioned the amount of 500 million won (to get over the situation),” but he stubbornly denied it, saying, “If I had tried to steal the money, I wouldn’t have come this far.”

On the afternoon of the 20th, the 23rd Criminal Settlement Division of the Seoul Central District Court (Presiding Judge Jo Byeong-gu) held the 7th trial on Yang Hyun-suk’s charges, including violating the Act on Aggravated Punishment for Specific Crimes (threat of retaliation). Yang is currently being tried on charges of threatening to change his statement at the police, who reported the suspicion of drug purchases by B.I (real name Kim Hanbin), a former member of YG’s group iKON.

On this day, while lawyer Yang Hyun-seok (hereafter referred to as the defense attorney) continued his opposing interrogation against the witness Han, the lawyer focused on whether Mr. Han reversed his statement about B.I after being threatened by Yang, or whether he reversed the statement in order to receive a reward. All.

First, the lawyer argued that Mr. Han had overturned his statement about Kim Han-bin in order to receive a kickback from YG.

The lawyer asked Mr. Han, “After doing drugs with Kim Han-bin, you are claiming that you were afraid of being threatened by YG. Not long after that, what was the reason for taking drugs again with Choi Seung-hyeon (Big Bang Top) of YG?” Han said, ” Choi Seung-hyun first bit an e-cigarette with drugs in his mouth.”

He continued, “When I met Choi Seung-hyun, I said clearly, ‘I am being investigated for drug dealing with Kim Han-bin’ and ‘I am under the management of Mr. Kim, a YG official’, but (Choi Seung-hyun) acted like it was nothing. Afterwards, Choi Seung-hyun drank wine and got excited, so he bit an e-cigarette with drugs in his mouth. This was also confirmed by Choi Seung-hyun through a phone call in 2019. It’s a pity that I didn’t record it back then,” he said.

Also, to the lawyer’s question, “I first informed YG that I had drugs with Kim Han-bin and Choi Seung-hyun. What is the reason? Do you have any other intentions?” Han answered, “Do you think it was because of money? . I was telling you to prepare in advance, just to know that you did it.”

At Mr. Han’s words, the lawyer started talking about the key money in earnest.

The lawyer said, “If you look at the statement, there is a story that Lee, the CEO of Entertainment A, offered to accept money from the witness (from YG). I spoke to the effect that YG should receive a kickback, but the word that he was threatened and the word reward doesn’t seem to fit very well.” questioned.

Then Mr. Han said, “If I had tried to steal money, I wouldn’t have come this far. It’s really unpleasant. The word kickback was first used there, and I used it without thinking.” However, to the lawyer’s question, “Yes,” answered the lawyer’s question, “The witness said, ‘If I had paid the money as promised (YG),'” he answered, “Yes,” raising questions about the credibility of the testimony.

Previously, Mr. Han claimed that YG had sent him to the United States at the end of 2016 through Lee Mo, CEO of A Entertainment, after learning that he had been on drugs with Choi Seung-hyun. In this regard, the defense attorney tried to prove that Han’s trip to the US had nothing to do with YG.

The lawyer asked, “Have you ever directly said that YG is sending witnesses abroad?” and Han answered, “(Lee) said that he had to earn time at YG (because of Big Bang’s comeback activities). After being arrested at the airport on drug charges in March, I remember that when Mr. Lee came to visit, he said, ‘I’ll ask YG to buy you a plane ticket’.”

Then the lawyer asked, “Mr. Lee tried to get money (from YG) under the pretext that Seunghyun Choi and the witness were drugged, but when that didn’t work, didn’t Mr. Lee have to pay all the expenses?” and Mr. Han answered, “That’s me You can ask Mr. Lee. You should ask Mr. Lee.”

In addition, the lawyer said to an acquaintance of Mr. Han while he was in the United States, ‘Because of the man, (the period in the United States) was extended. I tried to prove that there was no connection between YG and Han’s trip to the US, using the message ‘Why am I obsessed with men’ as evidence.

Regarding this, Mr. Han said, “At first, I was told by Mr. Lee that it would take about two weeks to a month (in the US), but it kept getting delayed and eventually came in close to the visa deadline. I asked him several times when he could go to Korea, and he said, ‘Wait because YG didn’t confirm it.’ It wasn’t a situation where I couldn’t do it because of the guy.”

The lawyer also questioned why Mr. Han made the public interest report with the intent of ‘YG did not give money’.

The lawyer said to the police officer who investigated him, ‘I didn’t (report) if (Yang) Hyun-seok gave me money’, to an acquaintance aka Charlie, ‘I reported it in the public interest because there was no case’, a friend of Mr. He presented evidence such as saying to Mr.

“I didn’t want to explain in detail the circumstances in which I was harmed to everyone,” Han told his lawyer. If you just say, ‘It’s because they don’t give you money,’ the other person has nothing to say. I just wanted to pass the situation on as a joke so that the other person doesn’t ask for more details.”

He continued, “The article has already been published, but it’s not in a situation where you can stop paying money, isn’t it? I said that because I knew I wouldn’t be able to anyway.” He said, “I had a strange feeling at the time, so I recorded the conversation with Mr. Ko. If you listen to the conversation, you will understand the nuance. I have a cell phone at home that recorded the content, and I will submit it. (If real money was the goal) I wouldn’t dig a grave on my own by submitting a transcript.”

However, the lawyer insisted, “I usually don’t talk about money as a joke. It seems that reports in the public interest are also because of money,” and Mr. Han said in a furious voice, “It was true that I was threatened and mentioned 500 million won. It wouldn’t have happened. If I had received money, I would be guilty of it too (I wouldn’t have made a public interest report).”

The lawyer and Mr. Han clashed violently throughout the trial. When the lawyer talked specifically about Mr. Han’s mention of himself as a ‘public servant’ through social media, etc., Mr. Han was furious, and the presiding judge said, “If it is not intended to provoke a witness, please submit it as a written opinion. Bring the witness some water. different,” he said.

At the end of the trial, the presiding judge wanted to clarify the position of whether the witness Han’s actions, such as reversing Kim Han-bin’s drug case statement and reporting public interest, were motivated by money.

When asked by the judge, “The word 500 million won keeps coming up during the trial, if you received 500 million won, would you want to cancel the public interest report and close the case?” It was that he had no intention of reaching an agreement by making it an article and making it public.”

The cross-examination against Witness Han was completed on this day. On July 18, the prosecution’s interrogation of Mr. Han will resume.

Yang Hyun-suk is facing trial on charges of conciliating, threatening, and demanding that he reverse his statement by calling Han, a former singer trainee, who was a supply for B.I’s drug allegations in 2016. It became known that Mr. Han made a public interest report directly to the Anti-Corruption and Civil Rights Commission in 2019, and Yang Hyun-suk’s side denies the charges, saying that he had met Mr. Han, but she did not threaten him.

B.I was sentenced to three years in prison and four years of probation on charges of purchasing cannabis and LSD, a type of drug, and using some of them in September last year (violation of the Narcotics Control Act, etc.).