When he rose, the crows retreated… ‘Eagle’, the king of the sky[영상]

A natural monument (No. 243-1), a winter migratory eagle, was caught feeding in the vivid wild.
On the afternoon of the 1st, Gunnam-myeon Gunnam-myeon, Yeoncheon-gun, Gyeonggi-do (flood control site, North Korea’s Hwanggang Dam countermeasure dam) 300m below Imjin River On the ice on the side of the river where the river is frozen. The carcass of 1 bee goose was found.

An eagle that appeared above Gunnam Dam on the Imjin River in Yeoncheon-gun, Gyeonggi-do on the afternoon of the 1st. Yeoncheon Area Love Practices

In the afternoon of the 1st, under the Gunnam Dam, Imjin River, Yeoncheon-gun, Gyeonggi-do, where a carcass of an iron goose was found. Yeoncheon Area Love Practices

I wondered if one crow flew, and about 10 crows swarmed in an instant. The crows soon fought and began to eat the corpse of the goose from the strong crow. Some crows start pulling their fur first. I started eating from the weak part.
It was at this time. As tall as an adult, spreading its wings wide and gliding, an eagle flew in like a blast from somewhere. The crows were surprised by the vulture’s majesty, and instantly retreated to the surroundings. 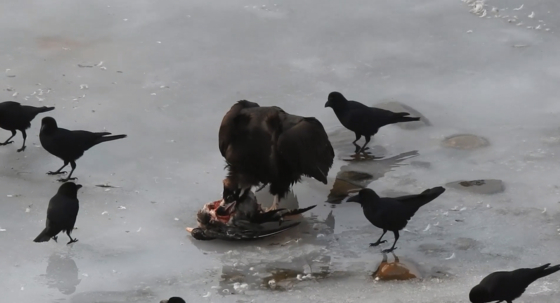 On the afternoon of the 1st, under the Gunnam Dam, Imjin River, Yeoncheon-gun, Gyeonggi-do. An eagle is surrounded by crows and eats a wild goose alone. Yeoncheon Area Love Practices

A flock of crows waits with no prey

The eagle immediately climbed onto the goose, pressed it with its strong paws and claws, and began to eat it with a strong jaw and beak. At this time, a swarm of crows stood around and aimed for a chance to take prey. Some crows bothered the eagle by riding on the back of the eagle or by biting its tail.

The eagle did not give in. They defeated the crows with flapping their wings or pecking with their beaks. In this gap, a crow bit a small piece of bone and pulled it out to the side, and a group of crows rushed to eat the bones in an instant. 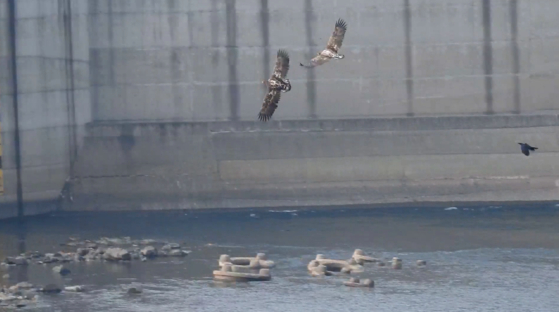 Two white-tailed eagles appearing at the bottom of Gunnam Dam on the Imjin River in Yeoncheon-gun, Gyeonggi-do on the afternoon of the 1st. Yeoncheon Area Love Practice

At this moment, two white-tailed eagles, rare birds of prey appeared in the sky, a rare natural monument (No. 243-4). It circulated several times in the sky around the prey already occupied by the eagle. Then, it landed on the branches around the prey, then flew back to the ice next to the prey and sat down. But that was it. The eagle, who was dominated by its prey, sometimes raised his head and sent a terrifying look, so he couldn’t get close to him and only looked at it with a distance of 2-3m. The white-tailed eagle, who had only watched for 20 minutes, disappeared suddenly somewhere, giving up its prey by the time the eagle was eating almost its prey. 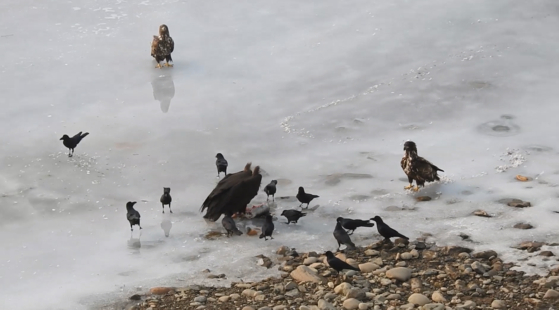 On the afternoon of the 1st, under the Gunnam Dam, Imjin River, Yeoncheon-gun, Gyeonggi-do. An eagle eating a wild goose alone, surrounded by a group of crows and two white-tailed eagles. Yeoncheon Area Love Practice

Over an hour, the eagle ate all of the black goose with only one bone left and flew up vigorously. The eagle filled the ship, flapping its powerful wings, and flew far beyond the nearby Gunnam Dam toward the Bingae Yeol in the northbound civilian control line (private access control line). Only then, about 10 crows waiting around ran into the remaining bones and quickly ate the remaining flesh. 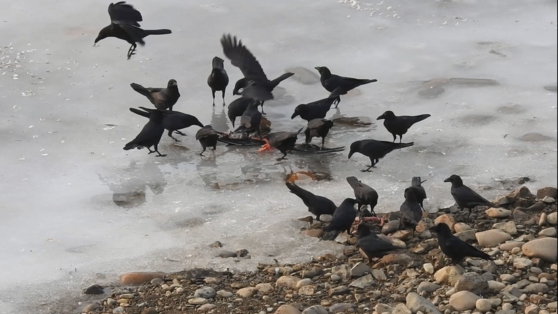 On the afternoon of the 1st, under the Gunnam Dam, Imjin River, Yeoncheon-gun, Gyeonggi-do. A flock of crows is eating the vultures left behind. Yeoncheon Area Love Practice

Lee Seok-woo, the head of the Yeoncheon Area Love Practice Group, who captured this image on the camera, said, “Even with the dignified dignity of the’Lord of the Sky’, it was an opportunity to confirm the true appearance of the eagle, who was often chased by magpies, crows, and even cranes on land. That’s it.” Lee Seok-woo, who is known as’the father of the crane’, who has been leading the protection of cranes in the Imjin River for 21 years, said, “A video of the wild ecology of the DMZ (Demilitarized Zone), which was not well known, was recently uploaded on YouTube. We are sharing.”

☞ Eagle = Inhabits between Korea and Mongolia. It is also called the nickname’wild scavenger’ by eating the carcasses of animals. Among the eagles and birds, the large raptors are commonly referred to as’eagles’, but are strictly different species. For example, “American Eagle” refers to a bald eagle. Of the eagles and birds, four types of eagles, golden eagles, decapitated eagles, and white-tailed eagles are designated as natural monuments (No. 243).

Merkel “Deportation of diplomats, show that Russia is not a rule of law”

Movie/KD’s first start as a substitute in his career, terminated 866 consecutive games and was forced to withdraw to accept the epidemic tracking | NBA | DONGTW News

Realize your dream in nine days, take the...

The Supreme Court has sentenced Premchai in the...

[경제]’Green light’ for exports to the United...