When the US economy grows 3%p, the world also 1%p↑… Falling water effect of US money loosening

An analysis has shown that the massive economic stimulus measures the US government has put forward to recover from the economic shock caused by the spread of the novel coronavirus infection (Corona 19) can have a positive effect on global economic growth.

On the 30th, the Bank of Korea published a’Overseas Economic Focus’ report that analyzed the impact of the US economic stimulus measures on the global economy. According to this, the US’s Joe Biden administration is expected to expend massive fiscal expenditures this year, and the US economic growth rate is expected to increase significantly. Major organizations such as the Organization for Economic Cooperation and Development (OECD) and Goldman Sachs predicted that the US economic stimulus measures would have the effect of increasing the economic growth rate by 2.5 to 4.0 percentage points this year.

This is interpreted as the effect of the introduction of a large-scale American Rescue Plan worth $1.9 trillion (about 2118 trillion won) in March, just after Biden’s inauguration. The economic stimulus plan is a policy to support households suffering from reduced income due to Corona 19. It’s not just. Additional financial execution, such as a plan to invest in large-scale infrastructure (infrastructure) worth 4 trillion dollars (about 4460 trillion won) over the next 10 years, is also predicted. 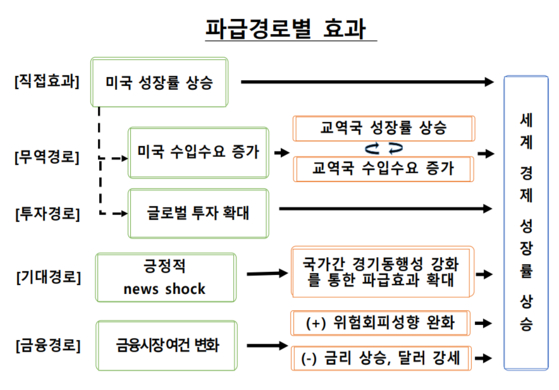 This is because when the US economy grows, trade with other countries increases accordingly. In particular, countries with high export dependence, such as Canada and Mexico, will be greatly affected by the increase in trade. The report analyzed, “It is estimated that 12.2% of the US final demand will generate added value overseas (when trade with the US increases).”

The sentiment of investment by households and businesses in the United States could also expand. As the US spending increases, the economic recovery accelerates and the expectation that trade will expand is growing, and foreign investment is also increasing as well.

Side effects such as inflation, which appear as the government releases money, are still a risk factor. Increasing inflation pressure can increase and cause the economy to overheat. In particular, there are concerns that excessive fiscal policy will have a negative effect on the credit rating of the United States. For this reason, Fitch, an international credit rating agency, downgraded the US national credit rating from’stable’ to’negative’ in August of last year.

Larry Summers, who served as finance minister during the Bill Clinton administration, wrote in a column to the Washington Post on the 24th. “The main risks to the US economy are overheating and inflation. In other words, the focus of macroeconomic policy should change.”

Space travel filmed on YouTube, the cost of boarding the shuttle is 10 billion won.

Cryptocurrency Power Ledger on the rise 5585 from...

Bank of Thailand reveals the results of...

January 9, 2021
We use cookies on our website to give you the most relevant experience by remembering your preferences and repeat visits. By clicking “Accept All”, you consent to the use of ALL the cookies. However, you may visit "Cookie Settings" to provide a controlled consent.
Cookie SettingsAccept All
Manage consent