‘Williams break up and invest’ KIA rebounded… How about rebuilding the ‘128 Loss’ Subero? 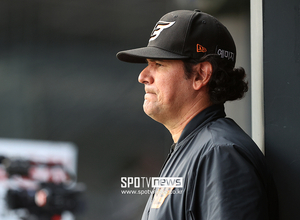 [스포티비뉴스=잠실, 김민경 기자] “You are free to fail.” “Rebuilding is painful.”

Hanwha Eagles manager Carlos Subero said. From the time he first came to Korea last season on a three-year contract with Hanwha, he used to frequently make remarks that weighed on the future rather than his immediate performance. Before Subero arrived, Hanwha was raising its voice to nurture young players while reducing the size of the squad by arranging a large number of veterans. There was a movement to reinforce the power by recruiting an external FA, but there was no result. It is a situation where the commander has no choice but to explain Hanwha’s current status as a “rebuilding process” throughout.

Hanwha has been producing painful results for the second season with the rebuilding at the fore. In the 212 matches played by Subero as manager, the win rate was only 0.357, with 71 wins, 128 losses and 13 draws. Last season, which was his first year as coach Subero, he was at the bottom with a win rate of 49 wins, 83 losses, 12 draws, and 0.371. Instead of taking the pain, the results should show an upward trend, but the win rate was lower than last year.

“It’s a tough situation,” Subero explains. Foreign one-two punches Nick Kingham and Ryan Carpenter were injured and released at the same time as they started, causing a huge power loss. On the 10th, Noh Si-hwan, the 4th batter, who had a high proportion of attack on the team, was absent due to a thigh injury, and captain Ha Joo-seok was dissatisfied with the strike decision and rioted, and on the 21st, the KBO Reward and Punishment Committee gave him a disciplinary action, including suspension of 10 games. received.

While Hanwha was in endless pain, the KIA Tigers succeeded in rebounding. KIA is a team that made a similar attempt just a year earlier than Hanwha. He signed a three-year contract with manager Matt Williams ahead of the 2020 season. He was the Tigers’ first foreign manager. Williams, a former All-Star third baseman in the US Major League Baseball, had a history of taking the baton for the Washington Nationals. The KIA wanted Williams to show advanced baseball by passing on the splendid experience he had in the big leagues as a player and coach. The foreign coach’s method of nurturing promising players was also one of the points that gathered expectations.

However, the relationship ended after two years. In 2020, he missed the fall baseball ticket by staying in sixth place with a win rate of 73–71, 0.507, and last year, he was ranked ninth with a win rate of 58–76, 10 and 0.433. As they fell to the lower ranks, it was said that there was a problem with the way Williams communicated with the squad, and the club announced the termination of the contract as soon as the end of last season, citing “responsibility for poor performance and renewal of the team atmosphere.” Manager Williams left Korea with a win rate of 131 wins, 147 losses, 10 draws, and a win rate of 0.471 for two years.

KIA, which gave up foreign coaches and appointed Kim Jong-guk this year, succeeded in rebounding. They are in fourth place with a win rate of 0.530 this season with 35 wins, 31 losses and 1 draw. Foreign one-two punch Shawn Nolin and Ronnie Williams both suffered from injuries and sluggishness, so the situation is similar to Hanwha, but there is a strong support of ace Yang Hyeon-jong, and in 2021, expectant Lee Ui-ri rotates after two years of pro has grown to the point of steadily turning Young Pil Seung-jo, such as Jung Hae-young, Jang Hyun-sik, and Jeon Sang-hyun, also plays a big part.

Above all, I spent money. He is enjoying the effect of bringing in outfielder Na Seong-beom, who was the biggest free agent last winter, for 6 years and 15 billion won. As Na Seong-beom adds weight to the center line, he is creating a synergy effect with veteran Hyeong-woo Choi and foreign batter Socrates Britto. The insufficient power that has not been filled in the FA market is being filled with active trade. Catcher Dong-won Park, who was traded with Kiwoom, is a representative success story. It is said that KIA is a potential excellent customer in the free agency market after this season. It is a move that does not miss both nurturing and investment.

The only investment Hanwha can make right now is the recruitment of foreign players. New foreign pitcher Yefri Ramirez joined the starting rotation on the 21st, and another foreign pitcher, Felix Pena, is expected to join soon. If the new One-Two Punch pays for your meal, you can breathe a little.

Read Also  In front of 19-year-old Alkaras... Djokovic and Nadal both kneel

Subero is still looking for possible positive elements in the players even after he has lost a long streak. He said, “The bullpen is our team’s strength. It’s also positive that players that we didn’t think about at the beginning of the season, such as Kim In-hwan and Lee Jin-young, are helping the team. Eun-won Jung also suits the third hitter and is showing good performances. I look forward to the time when everything is ready.” Can Subero’s rebuilding come back as a big reward for the pain he has endured? I wonder how much more patience Hanwha will be able to show, having already taken on 128 losses.