With only glances and gestures… KT showed the best ceremony ever

KT Wiz presented the best winning ceremony ever. This is the moment to get a glimpse of the source of ‘Team KT’. Provided by KT

No event was planned. With only hot eyes and touching hand gestures, KT Wiz showed the best victory ceremony.

KT won the KS championship with an 8-4 win over the Doosan Bears in Game 4 of the Korean Series (KS) held at Gocheok Sky Dome in Seoul on the 18th, becoming the ninth in history to win the KS. Following the regular season 1st place, it is the combined championship in 2021.

In the meantime, there were many famous scenes at the moment of KS victory. The sight of legendary pitchers such as the late Dong-won Choi, Dong-yeol Seon, and Yong-su Kim rejoicing like children in the arms of the catcher stimulates the nostalgia of the old fans.

The strongest teams in the 2010s, the Samsung Lions and the Doosan Bears, showed off their pre-prepared performances and showed off their leisure and dignity. A representative example is Doosan Yoo Hee-kwan, who wore an Iron Man outfit in 2016 and posed in a unique humorous pose. Last year, NC Dinos produced an impressive scene by modeling the ‘executive sword’, an item that symbolizes the parent company’s game Lineage.

KT’s ‘eldest brother’ Yuhan-jun said, “I didn’t prepare a separate championship ceremony before the 4th game on the 18th.” The KT players showed only embracing on the mound after winning the championship. was relatively ordinary.

But the real emotion that was not directed was waiting. The KT players who were sharing the joy suddenly gathered on the mound and stared at the dugout on the first base side. Fans also looked around and started to understand the situation. About 30 seconds later, the shouts erupted again. Park Kyung-soo, the ‘second brother’ on crutches, went to the ground with Yuhan-jun’s support. The KT players greeted the two seniors with hand gestures and applause saying “Come here”. 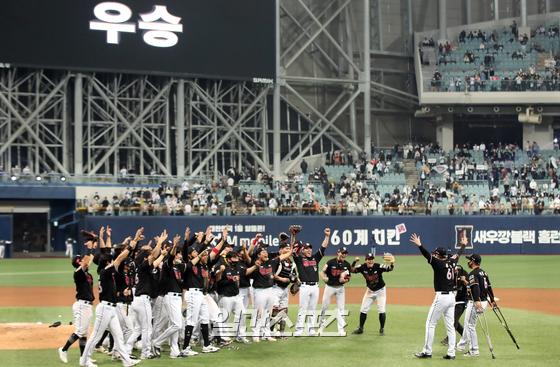 The fourth game of the Korean Series between the Doosan Bears and KT Wiz in the 2021 Pro Baseball KBO Postseason was held at Gocheok Sky Dome in Seoul on the afternoon of the 18th, and KT won 4 in a row with an 8-4 victory and ended with KT’s combined victory. KT players are waiting for Park Kyung-soo, who has crutches due to an injury after winning the championship. Gocheok = Reporter Kim Min-gyu [email protected] /2021.11.18/

Park Kyung-soo suffered a calf muscle rupture while defending in the third game. Throughout the series, he showed a picturesque rain several times, and in the 5th inning of Game 3, he even hit a solo home run that broke the 0-0 balance, leading KT to victory in games 1 to 3. Personally, I challenged the championship with KS, which I participated in 19 years after my debut. However, the injury prevented him from playing the rest of the game.

Shortstop Shim Woo-jun, who is a keystone combination, burned his fighting spirit before Game 4, saying, “I will take another step forward considering the advice that Kyung-soo hyung gave me on the ground.” said the promise. Shin Bon-ki, who started second base instead of Park Kyung-soo, said, “I will focus on every moment so that I don’t feel Kyung-soo’s void.”

Yuhan-jun stayed by Park Kyung-soo’s side throughout the 4th game. They patted their shoulders when there was one out until the victory, and shared a hug when the victory was confirmed. Even when the juniors got together on the ground, the two veterans quietly congratulated each other.

With the appearance of Park Kyung-soo, the KT team, which finally became a whole, started the second celebration ceremony. Park Kyung-soo threw away his crutches and shared the joy together. I hugged the captain Hwang Jae-gyun and cried for a while. Dongjin Kwon, the youngest member of the infield, lifted up the fallen crutches and raised the mood.

Park Kyung-soo was selected as the KS Most Valuable Player (MVP). He is the oldest awardee in history and the first MVP to stand on the podium with support. He said, “This season’s MVP is the fans and Team KT”.

The lab doctor said it was unlikely. After the girl injected Pfizer and got pregnant despite taking birth control pills