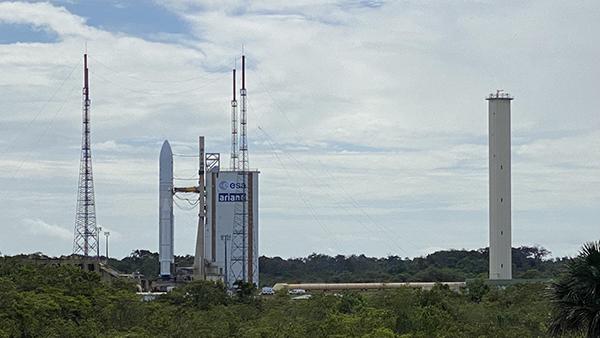 The first flight satellite was successfully launched on the 23rd for the operation of the ‘Korean Air Satellite Service (KASS)’, which corrects the position error to within 1m.

According to the Ministry of Land, Infrastructure and Transport, Aviation Satellite Unit 1 was launched from the Kuru Space Center in Guiana, South America around 6:50 am (Korean time) on the same day and went through processes such as separation of the satellite protective cover (pairing) and separation of the first stage rocket, about 28 minutes after launch. It was confirmed that it was successfully separated and finally launched at 7:18 am.

The normally separated Aviation Satellite Unit 1 is scheduled to move into geostationary orbit (about 36,000 km) after about 12 days.

When an aviation satellite is placed in orbit, it will go through a signal test, etc. and begin full-fledged service from next year.

It is expected to provide precise and reliable location information by correcting the GPS error from 15 to 33 m to 1 to 1.6 m through facilities such as aeronautical satellites and ground reference stations and central processing stations.

The Ministry of Land, Infrastructure and Transport explained that it will provide more precise and reliable location information to future mobility location-based service industries such as navigation, drones, autonomous driving, and urban air traffic (UAM).

On the same day, Minister of Land, Infrastructure and Transport Won Hee-ryong visited the satellite control room of the Aerospace Research Institute located in Daejeon and directly observed the live broadcast of the launch of Air Satellite No.

At the site, an ‘Aerospace Satellite Science and Technology Conference’ was held with researchers and corporate officials involved in KASS technology development.

Researchers from the Korea Aerospace Research Institute and the Korea Electronics and Telecommunications Research Institute and KTsat, who have been in charge of developing aeronautical satellite services, said, “We have accumulated a lot of know-how in the process of developing KASS, and in the future, we will expand to 2035 with the Chollian 3 and the Korean Satellite Navigation System (KPS) project. We plan to develop the 3, 4, and 5 aviation satellites by the end of the year.”

In addition, the research team said, “Localization of core technologies is urgently needed due to the high dependence on foreign technologies for key parts of satellite payloads such as wireless amplifiers and oscillators. We need attention,” he said.

It is reported that officials from Hanwha Systems, which is promoting the Urban Air Mobility (UAM) business, and Tmap Mobility, which provides navigation map services, also attended the meeting and expressed their expectations for the KASS service.

Minister of Land, Infrastructure and Transport Won Hee-ryong said, “Location information has had a profound impact on all aspects of human life, including trade, industry, and intellectual property. . We will continue to actively cooperate with related ministries, researchers, and private companies for the successful development of KPS.”