Xinhua News Agency, Beijing, September 17th. President Xi Jinping attended the 21st meeting of the Council of Heads of State of the Shanghai Cooperation Organization in Beijing on the afternoon of the 17th in a video mode and published the title “Do not forget the original intention and move forward to start the development of the Shanghai Cooperation Organization. The important speech of “New Journey”.

On September 17, President Xi Jinping attended the 21st meeting of the Council of Heads of State of the Shanghai Cooperation Organization Member States and delivered an important speech in Beijing.Photo by Xinhua News Agency reporter Huang Jingwen

Xi Jinping pointed out that since its establishment 20 years ago, the Shanghai Cooperation Organization has always followed the “Shanghai Spirit” of “mutual trust, mutual benefit, equality, consultation, respect for diverse civilizations, and seeking common development.” Relations and a community with a shared future for mankind make important theoretical and practical explorations. We jointly promote political mutual trust and create a new model of “partnership, non-alignment, dialogue and non-confrontation”; jointly safeguard security and stability, resolutely curb the spread of drug smuggling, cybercrime, and transnational organized crime; work together for prosperity and development, and promote regional pragmatic cooperation. Development; sharing international morality, making a resounding voice on promoting multilateralism and the common values ​​of all mankind, and expressing a fair stand on opposing hegemonism and power politics.

Xi Jinping emphasized that the Shanghai Cooperation Organization has stood at a new historical starting point. We should hold high the banner of “Shanghai Spirit”, grasp the way forward in the historical trend of democratization of international relations, promote our own development in the grand pattern of common development of mankind, build a closer SCO community with a shared future, and contribute to lasting world peace and common prosperity. Greater contribution. Xi Jinping made five suggestions.

First, take the road of unity and cooperation. It is necessary to strengthen policy dialogue and communication and coordination, respect each other’s reasonable concerns, resolve problems in cooperation in a timely manner, and jointly stabilize the development direction of the SCO. We must strengthen our self-confidence in our system, never accept the preaching of the “teacher”, firmly support countries in exploring development paths and governance models suitable for their own national conditions, and never allow external forces to interfere in the internal affairs of regional countries under any pretext, so as to advance the future of their own countries. Fate is firmly in his own hands.

We must uphold the concept of people first and life first, promote the spirit of science, carry out in-depth international anti-epidemic cooperation, promote the fair and reasonable distribution of vaccines, and resolutely resist the politicization of virus traceability. So far, China has provided nearly 1.2 billion doses of vaccines and stock solutions to more than 100 countries and international organizations. It will step up to provide 2 billion doses of vaccines to the world throughout the year, deepen cooperation with developing countries in the fight against the epidemic, and make good use of China’s direction of “new crown vaccine implementation.” The 100 million U.S. dollars donated by the “Plan” has made due contributions to mankind’s complete victory over the epidemic.

Second, take the road of sharing safety and security. We must adhere to a common, comprehensive, cooperative, and sustainable security concept, severely crack down on the “three forces” such as the “Eastern Iranian Movement”, deepen cooperation in drug control, border defense, and security for large-scale events, improve the organization’s security cooperation mechanism as soon as possible, and strengthen the competent authorities of various countries to maintain stability Ability to deal with emergencies. All member states should strengthen coordination to promote a smooth transition of the situation in Afghanistan and truly embark on the path of peace, stability and development.

Third, take the road of openness and integration. We must continue to promote trade and investment liberalization and facilitation, ensure the safe and orderly flow of people, goods, capital, and data, and create growth points for digital economy, green energy, and modern agricultural cooperation. Promote the in-depth integration of the “Belt and Road” initiative with the development strategies of various countries and regional cooperation initiatives such as the Eurasian Economic Union, maintain the stability and smooth flow of the industrial chain and supply chain, and promote economic integration, development linkage, and sharing of results in various countries.

China is willing to continue to share market opportunities and strive to achieve the goal of US$2.3 trillion in accumulated trade volume with countries of this organization in the next five years. China will set up the China-Shanghai Cooperation Organization School of Economics and Trade, launch the second phase of special loans for the joint construction of the “Belt and Road” cooperation, focusing on supporting projects such as modern interconnection, infrastructure construction, and green, low-carbon sustainable development.

Fourth, take the road of mutual learning and mutual learning. It is necessary to advocate exchanges and dialogues between different civilizations, harmonious coexistence, and create more ground-to-earth and heart-to-heart projects in the fields of science and technology, education, culture, health, and poverty alleviation. In the next three years, China will provide 1,000 poverty alleviation training places to Shanghai Cooperation Organization countries, build 10 Luban workshops, and carry out 30 cooperation projects in the fields of health, poverty alleviation, culture and education within the framework of the “Silk Road One Family” action. . China will host the organization’s youth science and technology innovation forum next year and propose the establishment of the organization’s traditional medicine industry alliance. All parties are welcome to participate in the 2022 Beijing Winter Olympics and the Paralympic Winter Games, and jointly present a simple, safe and exciting Olympic Games.

Fifth, take the road of fairness and justice. “For a while, strength lies in strength, and success in the future depends on reason.” To resolve international affairs, we cannot proceed from the so-called “power position” and promote hegemony, hegemony, and bullying. We should follow the purposes and principles of the UN Charter and insist on mutual consultation. Build and share together, practice true multilateralism, and oppose acts that undermine the international order, create confrontation, and divide under the banner of so-called “rules.” It is necessary to abide by the mutually beneficial and win-win cooperation concept and create an inclusive and inclusive development prospect.

Xi Jinping pointed out that he believes that the ever-growing “SCO family” will advance hand in hand with all progressive forces in the world to jointly be a builder of world peace, a contributor to global development, and a defender of international order.

In conclusion, Xi Jinping said, let us hold high the banner of “Shanghai Spirit”, keep our original aspirations and move forward, and start a new journey for the development of the Shanghai Cooperation Organization along the right path of building a community with a shared future for mankind! 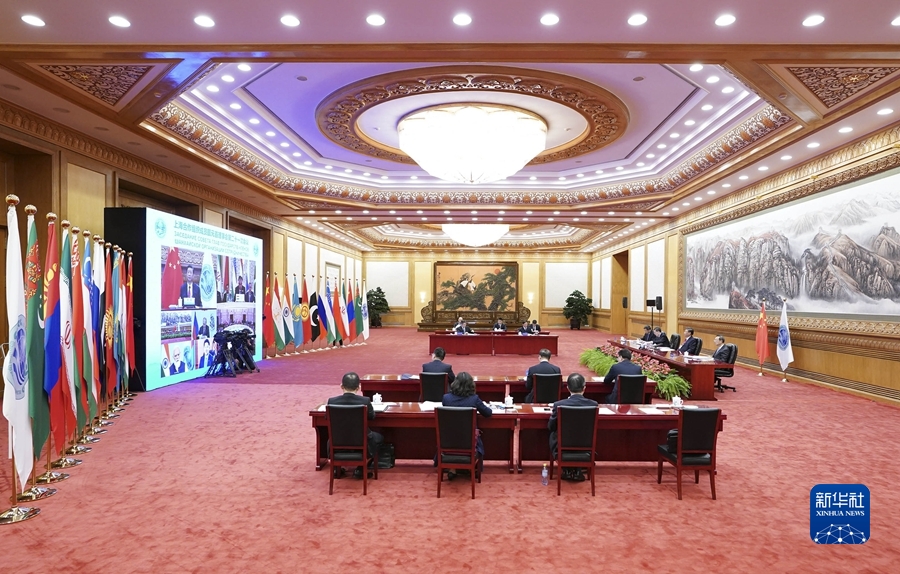 On September 17, President Xi Jinping attended the 21st meeting of the Council of Heads of State of the Shanghai Cooperation Organization Member States and delivered an important speech in Beijing.Photo by Xinhua News Agency reporter Shen Hong

The leaders at the meeting comprehensively reviewed and positively commented on the great achievements made by the Shanghai Cooperation Organization in the political, economic, security, and cultural fields over the past 20 years since its establishment. Common interests, cooperation to meet new situations and challenges, promote the sustained, healthy and stable development of the Shanghai Cooperation Organization, promote regional security and common prosperity, and promote the building of a new type of international relations and a community with a shared future for mankind. All parties expressed that they should strengthen unity, cooperate to fight the new crown pneumonia epidemic, strengthen vaccine cooperation, and oppose the politicization of virus traceability. Deepen cooperation in the fields of economy and trade, energy, innovation, interconnection, digital economy, environmental protection, adhere to people-oriented, strengthen cultural exchanges, achieve sustainable development, and better benefit people in the region. Support multilateralism, uphold the purposes and principles of the UN Charter, promote the democratization of international relations, oppose hegemonism and unilateralism, oppose interference in other countries’ internal affairs under the pretext of democracy and human rights, and support countries in choosing their own development paths. Further strengthen anti-terrorism cooperation, work together to combat the “three forces” and transnational crime, and jointly maintain regional security and stability. Support the advancement of the “Belt and Road” initiative and the construction of the Eurasian Economic Union. All parties expressed their opposition to the politicization of sports and support China’s successful hosting of the Beijing Winter Olympics and Paralympics. All parties pay close attention to the situation in Afghanistan and support Afghanistan in eliminating the threat of terrorism and achieving peace and reconstruction. The Shanghai Cooperation Organization will play an active role in this regard.

The meeting started the process of accepting Iran as a member state, and absorbed Saudi Arabia, Egypt, and Qatar as new dialogue partners.

The meeting decided that Uzbekistan would take over as the rotating chairman of the Shanghai Cooperation Organization.

The leaders of the member states signed the Dushanbe Declaration on the 20th Anniversary of the Shanghai Cooperation Organization and approved a series of resolutions. The meeting also issued a statement on cooperation in areas such as scientific and technological innovation and food security.

Ding Xuexiang, Yang Jiechi, He Lifeng and others attended the meeting.

Wang Yi attended the meeting in Tajikistan as the special representative of President Xi Jinping.

It is not easy for Mumbai to retain the title; Peterson to Chennai

The doctor told me the miracle case, covid patients, ICU, white lungs, everyone thought they didn’t survive, but they survived!

Two Kovid deaths in Saudi; The number of...

“Secret support from South Korea and other seven...

I went to see an SNS friend...

Protesters occupied the seat of the U.S....