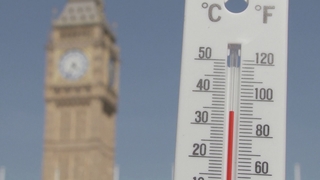 Not only Europe, but also the Americas and Asia are suffering from the scorching heat.

The early heat wave that arrived in June is breaking weather records in each country.

Experts claim that it is not a natural phenomenon, but a ‘human resource’.

It is delivered by PD Bang Joo-hee.

The earth is getting hotter.

France set a record for the earliest heat wave of 40 degrees since 1947, with the highest temperature in some regions exceeding 40 degrees on the 17th.

Spain was already over 40 degrees in early June, and in the south it was once as high as 43 degrees.

The Spanish Meteorological Agency explained that it is the first time since 1981 that a high temperature phenomenon has appeared as early as this year, and that summer in Spain started about a month earlier than 50 years ago.

“It’s been really hot this week. It’s unbelievably hot. It’s been a tough week. I’m hoping for a little cooler next week, but I know the heat will return in July and August.”

Not only in Europe, but also in the Americas and Asia, abnormal high temperatures have been occurring this year.

India is facing some of its worst harvests from premature heatwaves and Pakistan, one of the hottest cities in the world, has already hit 50 degrees in May.

In the United States, it is predicted that a stronger heat wave will come next week due to the huge heat dome phenomenon, and tens of millions of people will groan in the sweltering heat.

Experts point out that this is not a natural occurrence, but a human-induced catastrophe.

It is said that the climate has changed because greenhouse gases emitted into the atmosphere from fossil fuels, etc., promote global warming.

The Guardian reports that the likelihood of a heat wave in South Asia has increased by a factor of 30 due to human-induced climate change.

Experts and environmental groups agree that there is no way out of the climate crisis without reducing greenhouse gas emissions such as carbon dioxide and methane.