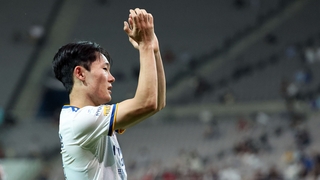 Ulsan, the leader of K League 1, won a thrilling comeback victory in Seoul.

Wonsang Um showed off his skills after returning from the national team by scoring two goals in a row.

Palosevic, who received Cho Young-wook’s pass, opened the goal wide in Ulsan with a left-footed kick.

After that, both teams fought back and forth.

In the 30th minute of the second half, Ulsan Bako balanced the game with a right-footed kick in response to Palošević’s goal.

Ulsan, who gradually increased their possession, scored a comeback goal in the 43rd minute of the second half.

When Lee Cheong-yong’s shot hit the keeper, Eom Won-sang rushed in and shook the net.

Won-sang Um scored two goals in a row. His eighth goal of the season made him the top scorer on the team.

“It’s like praying where the rebound ball goes. I think I was lucky enough to score. I want my team to win by scoring as many goals as possible.”

Seoul, who missed all the wins at home, has continued the unbeaten jinx against Ulsan for the 14th time since October 28, 2017.

Jeonju World Cup Stadium where the match between Jeonbuk and Suwon Samsung was held.

On the 19th, Suwon’s apology banner appeared in connection with the incident where a Suwon fan assaulted a Seoul fan.

The home team, Jeonbuk, pressed Suwon, who started the game in a chaotic atmosphere, and in the third minute of the second half, Hong Jeong-ho opened the scoring with Baek Seung-ho’s free kick.

In the 26th minute of the second half, which was 1-1, Kim Moon-hwan, the national fullback, scored his first goal after joining Jeonbuk, leading the team to a 2-1 victory.

Incheon, the top scorer in the league, achieved a hat-trick, and defeated Gangwon 4-1.