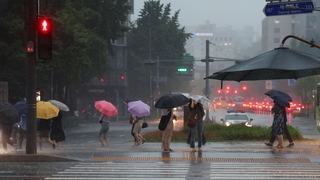 Heavy rain of up to 30 mm per hour fell in the metropolitan area including Seoul, flooding the downtown area and causing traffic congestion on the way home from work.

The Seoul Metropolitan Government announced today (23rd) that it is controlling the access road to the Dongbu Arterial Road from 8:15 pm.

Due to continuous torrential rain, the water level at Wolgye 1 Bridge in Jungnangcheon has exceeded the 15.83m control level for the entry ramp.

Vehicle traffic was delayed due to water accumulating on low-lying roads such as Gangbyeonbuk-ro Ilsan direction and Olympic-daero Hanam direction.

As of 7:30 p.m., the time to leave work, traffic congestion intensified, and the overall speed of vehicles in Seoul was only 16.3 km/h.