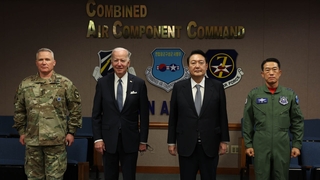 The Defense Authorization Act, which deals with the US defense budget for next year’s fiscal year, contains the content of maintaining US forces in Korea at the current level.

Procedures still remain, but it is highly likely that they will be specified in the law.

It also includes measures to strengthen the alliance with South Korea, a ‘key security partner’.

This is the defense budget for fiscal year 2023 contained in the NDAA, the Defense Authorization Act, which was recently passed to the plenary session by the U.S. Senate and House military committees, respectively.

The relatively weighty alternative to the House Armed Forces Committee stated that, as this year, the number of USFK troops should be nailed to 28,500 and that the current size should be maintained to deter attacks on the United States and its allies.

The Joe Biden administration originally excluded the USFK current level maintenance rule from the NDAA for fiscal year 2022, but added it during the committee’s review process.

The bill further emphasized the importance of the ROK-U.S. alliance by preparing separate items for the 70th anniversary of the ROK-US Mutual Defense Treaty and extended deterrence against the North Korean nuclear threat.

In relation to the strengthening of extended deterrence agreed at the Korea-US summit in May, we have included the provisions of the defense minister’s report to Congress before March 1 next year.

Read Also  Lee Jun-seok's 'unification breakdown' emphasizes the responsibility of Ahn Cheol-soo... “If you give up your candidacy, you will be treated with respect.”

The alternative, which passed the Senate Armed Services Committee, said the Pentagon must respond to threats from North Korea, Iran and violent terrorist groups.

The NDAA is passed through the plenary session of the Senate and the House of Representatives, coordinated, and drafted into a single bill.

Some say that the NDAA process may be delayed until November in consideration of the midterm election schedule and the deliberations of the gun control law.

This is Kim Ji-sun from Yonhap News.