On the 12th, the prosecution requested an arrest warrant for Kim Man-bae, a major shareholder of Hwacheon Daeyu Asset Management (Hwacheon Daeyu Asset Management), and revealed the amount of damage on suspicion of breach of trust under the Act on Aggravated Punishment of Specific Economic Crimes. Prosecutors believe that Kim and Yoo Dong-gyu, former acting president of Seongnam Urban Development Corporation (who are in prison) colluded to inflict damage of at least 110 billion won to the construction company, but this amount of damage is likely to increase as the investigation proceeds.

According to the Dong-A Ilbo coverage on the 13th, the investigation team in charge of the Seoul Central District Prosecutor’s Office’s investigation into the Daejang-dong development allegation (team leader Kim Tae-hoon, 4th deputy chief prosecutor) received a bribe from Mr. It is believed that the project design that deleted the excess profit recovery clause was confirmed and caused losses so that huge profits could be returned.

At the beginning of the investigation, the prosecution requested an arrest warrant for Yoo’s acting deputy on the 2nd, and only listed the amount of damage on the charge of breach of trust as ‘hundreds of billions of won’. Afterwards, the prosecution said that 1163 of the difference between the 590.3 billion won paid out to all shareholders of Hwacheon Daeyu due to the good news of real estate and the expected profit of 359.5 billion won at the beginning of the project was 230.8 billion won, which corresponds to 50% of Seongnam Urban Development Corporation’s share + 1 share. It is known that the damages were calculated as billions of won. Prosecutors are examining whether the charge of breach of trust can be applied to the additional profits made by Hwacheon Daeyu, etc. 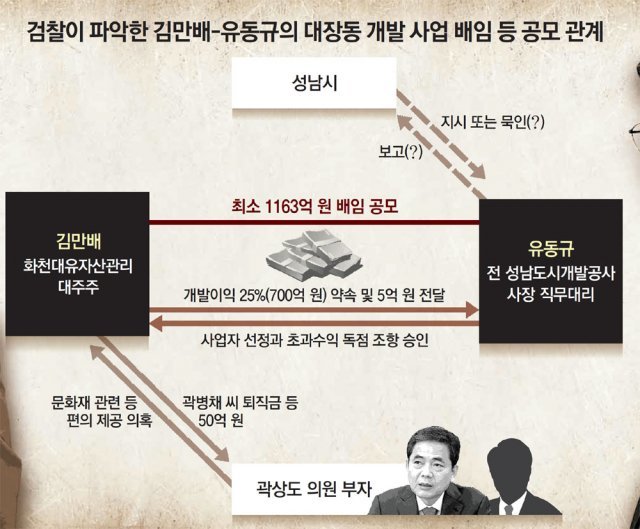 Inside and outside the prosecution, there are speculations that the investigation into allegations of breach of trust toward Seongnam City, which has the final approval and permission for such a Daejang-dong development project, will be in full swing. This is a structure in which the upper line of the alleged breach of trust can be revealed only if the deputy director of former president Yoo reported on the Daejang-dong development project to Seongnam city officials and whether there was any instruction or acquiescence from the city of Seongnam. In the legal circle, there is an observation that Seongnam City may be an accomplice to the breach of trust as it is the main body that decided to develop Daejang-dong in a public-private joint manner. Gyeonggi Province Governor Lee Jae-myung, who was the mayor of Seongnam at the time, also stated that the development of Daejang-dong was “the largest exemplary public interest project since Dangun,” and that he had recovered a total of KRW 550.3 billion in development profits. Accordingly, it is highly likely that the prosecution will soon begin a compulsory investigation, such as a search and seizure of Seongnam City Hall, in order to investigate the allegations of breach of trust by officials of Seongnam City Hall.

However, Kim’s side protests that the charge of breach of trust was applied unreasonably. The response from Mr. Kim is, “What kind of damage did Seongnam City take with all the fixed profits promised at the beginning of the business?”

The Seoul Central District Court will conduct a substantive examination of the arrest warrant for Kim at 10:30 a.m. on the 14th at the hearing of Chief Judge Moon Seong-gwan.

Former Yantra being addicted to Gemini Why do...

Candidate Jae-myung Lee to resign as governor of...

Fight without corners: the return of Yantra, the...

My husband also sent to the in-laws,...