“You have to endure to live”… Lee Jae-myung’s ‘election audition’, Daejang-dong Inspector General’s point of view

The Gyeonggi state audit on the 18th is a de facto hearing at the cost of the ‘political life’ of Democratic Party presidential candidate Lee Jae-myung. As the governor of Gyeonggi Province, he must attend and receive a wave of attack from the People’s Power and Justice Party lawmakers over the suspicion of preferential development in Daejang-dong. Every word of this candidate, as well as his voice, eyes, and gestures, will all come to the test.

If Candidate Lee has only said ‘what he wants to say’ about the Daejang-dong allegation, this cannot be the case in the one-on-one question-and-answer format. The National Assembly, which begins at 10 a.m., could run for more than 12 hours, depending on Lee and the opposition party. If this candidate ‘slips’, he will be seriously hurt, and if he passes it safely, it will be an opportunity to reverse the recent crisis.

The suspicion of Daejang-dong has been heating up the country for over a month. Some ‘facts’ have come out. The public will pay attention to the candidate’s ‘attitude’ as much as the ‘content’. The People’s Power is hoping to bring about a ‘hot attitude’ that makes voters anxious about this candidate. A Democratic Party official predicted on the 17th, “People’s Power lawmakers will focus on strengthening the image of a ‘fighting chicken’ by stimulating Lee.”

It is the worst-case scenario for the Democrats for Lee to lose his composure and the National Assembly to go to a previous pitch. It is highly likely that the essence of the Daejangdong suspicion will disappear and only the controversy over the dignity of the nation’s supreme leader will be highlighted. His anger at opposition lawmakers who ask questions as representatives of the people may be seen as challenging the public sentiment.

The candidate is said to be aware of this. A person close to the candidate said, “Lee’s response strategy will be ‘resolute in message, soft in attitude’.” He said, “I know what people are worried about (emotional response), so I’ll do my best not to worry.”

Can this candidate soften his ‘game-winning temperament’ to the end? On Facebook on the 17th, he did not hide his offensive instinct, saying, “Even if there is a political offensive in the National Inspection, I will respond proudly without being swayed. The result will be different from the intention of the people’s power.” 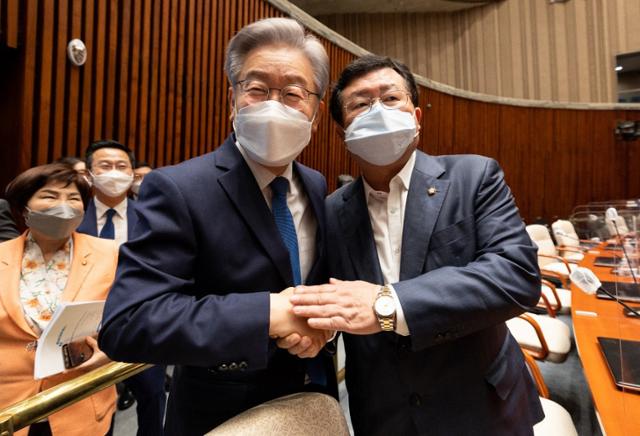 Democratic Party presidential candidate Lee Jae-myung (left) holds hands with Rep. Seol-hoon, who was co-election chairperson of the Lee Nak-yeon camp, at the Democratic Party’s general assembly held at the National Assembly on the 15th. Provided by Jae-myung Lee camp

A number of lawmakers close to former president Lee Nak-yeon are also in the Ministry of Public Administration and Security. Rep. Oh Young-hoon, who was the chief spokesperson for Lee’s presidential campaign, Oh Yeong-hwan, who served as the head of the training office, and Yang Ki-dae, a former Dong-A Ilbo reporter with Lee, are considered close aides to Lee. Rep. Kim Min-cheol did not belong to the presidential campaign, but he worked with Lee by insisting on the theory of Bundo in North Gyeongsang Province, and Rep. Lim Ho-sun also supported Lee during the Chungcheong election.

If they show their active support for Lee in the National Assembly, the Democratic Party’s ‘one team crisis’ will be quickly resolved, and Lee will gain strength again within the party. However, a member of the National Security Council close to Lee said, “It seems difficult for us to actively cover this candidate.” . 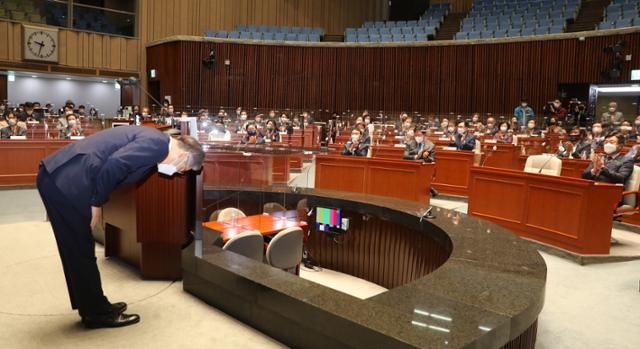 Democratic Party presidential candidate Lee Jae-myung bows his head to the members of the Democratic Party of Korea at the National Assembly Preliminary Committee meeting held on the 15th. News 1

Key 3: Lee Jae-myung, should he make an additional apology?

Candidate Lee acknowledged responsibility as a ‘manager’ for the corruption of Seongnam City employees after the arrest of Dong-gyu Yoo, a former head of the planning division of Seongnam Urban Development Corporation, known as an aide. But given the angry real estate public sentiment, some argue that Lee should take a more forward-looking expression of regret. However, this can be a matter of acknowledging the frame of ‘accomplices in breach of trust’ promoted by the power of the people, so Lee’s side is deeply concerned. A close aide said, “Currently, we are not considering making a ‘surprise apology’ from the chief of the National Assembly.”

Get to know HENG before trading on 19 Oct. This will accelerate the engine to push the loan portfolio in 66 past ten thousand million baht.

Restoring daily routine for a while… Reducing private...

I saw the most assaulted woman in her...

‘Booster dose vaccine should be given to those...

The Sichuan Provincial Party Committee of the Communist...

Come back, 143 Thai people were deceived into...