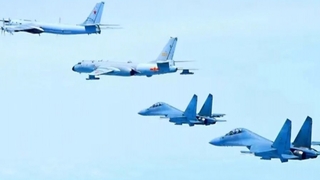 As the world’s attention is focused on Ukraine, military tensions are escalating like never before in the East China Sea, where the US and China are fighting.

The U.S. military has deployed attack drones to Japanese Self-Defense Force bases, and China has used its state-of-the-art fighter jets for the first time in a joint Sino-Russian patrol exercise.

Taiwan, which has emerged as a gunpowder for the US-China conflict, and the East China Sea, where the Senkaku Islands are in dispute between China and Japan.

Military tensions between the US, China and Japan in the East China Sea are escalating.

In July, eight U.S. military attack drones, the MQ-9 Reaper, will be deployed to the Kanoya Air Base of the Maritime Self-Defense Forces in Kagoshima Prefecture, southwest of Japan.

The MQ-9 Reaper is an armed unmanned fighter, equipped with the world’s best unmanned attack capabilities that not only collect information, reconnaissance and surveillance, but also strike targets with precision.

Qassem Soleimani, commander of the Quds Force of Iran’s Revolutionary Guards, was also attacked by the drone, who died while disembarking in Baghdad airport in Iraq in 2020.

150-200 U.S. military personnel are deployed at this base as unmanned aerial vehicle operation and maintenance personnel.

Kyodo News reported, “The purpose is to strengthen the surveillance of the border in the southwestern part of Japan, with China in mind, which is strengthening its maritime expansion.”

The day after the report was published, Chinese state media reported that it was the first time that a Chinese J-16 fighter was caught participating in a joint aerial strategic patrol exercise in the Asia-Pacific region between China and Russia.

This exercise was held on the 26th over the East Sea, East China Sea, and the Western Pacific Ocean.

Earlier, it is known that China’s first aircraft carrier, the Liaoning carrier group, has stayed for 20 days in the western Pacific waters east of Taiwan and south of Japan from the beginning of this month and conducted more than 300 sortie drills including fighters and helicopters.