The group BTS is thrilled when they received the grand prize ‘Artist of the Year’ at the 49th American Music Awards held at Microsoft Theater in Los Angeles, California on the 21st. Reuters Yonhap News

K-pop has risen to the top spot in the American pop music market.

At the American Music Awards (AMA) held at the Microsoft Theater in Los Angeles, USA on the 21st (local time), BTS won the ‘Artist of the Year’ award, beating out prominent top stars such as Taylor Swift, The Weeknd, and Ariana Grande. It is the first time that a Korean singer as well as an Asian singer has been nominated for an ‘Artist of the Year’ award at this awards ceremony since 1996, when this category was first created in the AMA. As BTS won the top prize at the AMA, the possibility of winning the Grammy, which boasts the highest authority in the American pop music world, is increasing.

BTS won all three nominations at the awards ceremony, including ‘Favorite Pop Duo/Group’ and ‘Favorite Pop Song’. AMA is considered one of the top three popular music awards in the US along with the Grammy Awards and the Billboard Music Awards. Unlike the Grammys, where the recording academy members, which are predominantly white males, determine the winners, the AMA is known as the awards ceremony that most accurately reflects commercial and public popularity in the United States, as it is awarded 100% according to the results of the general public’s vote. Kim Young-dae, a popular music critic, said, “This award is a historic event not only for Korea but also for the American pop music world.

This award is the best achievement since BTS debuted in 2013 and entered the Billboard chart for the first time in 2015 with ‘The Most Beautiful Flower Part 2’. After growing their fandom by successively succeeding in the ‘Love Yourself’ series, those who placed ‘Love Yourself All Tier’ at the top of the ‘Billboard 200’, the main album chart of Billboard in 2018, quickly rose to the ranks of top stars in the United States. They first won AMAs in 2018 as well.

On this day, BTS member RM said, “I first performed a live performance on this stage 4 years ago, and I remember being so nervous back then. Seven boys from Korea have come this far because of their love for music. All of this is a miracle, and I will never take it for granted.”

When BTS released their first English song ‘Dynamite’ last year, they entered the American public beyond the fandom. ‘Butter’, ‘Permission to Dance’ and ‘My Universe’ sung with the British rock band Coldplay have captured fans not only in the United States but also around the world with their popular and universal pop music. Kim Yun-ha, a popular music critic, said, “Dynamite’s popularity has weakened BTS’ identity as a Korean or K-pop artist. In addition, the successful achievements of the past year, such as long-term domination on the Billboard single chart, have taken us one step further and have solidified our image as one of the most popular artists in the United States.” 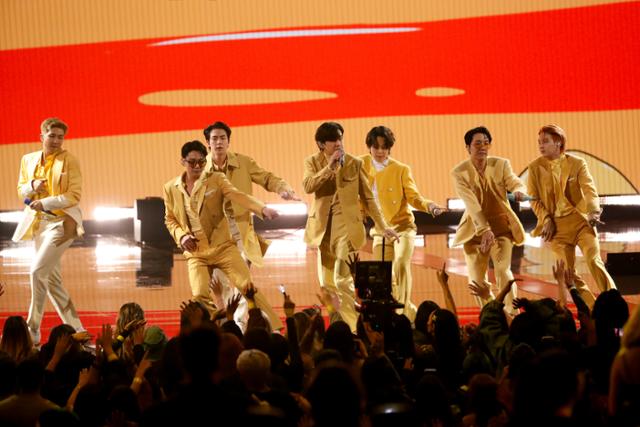 On the 21st at the ‘American Music Awards’ stage held at the Microsoft Theater in Los Angeles, California, USA, BTS sang the hit song ‘Butter’ and decorated the final stage of the awards ceremony. Reuters Yonhap News

BTS’s chances of winning a Grammy are high. The American Recording Academy has been significantly increasing the proportion of women, people of color, and under 39 years of age since 2019, and the selection method of the nominees set by the minority secret committee has changed to a vote for all members of the recording academy. This is a beneficial change for BTS in many ways. Critic Kim Young-dae said, “Since the first round of voting for the recording academy has already ended, the AMA award will not directly affect the selection of the Grammy nominations, but it will be advantageous for BTS as more members of the K-pop-friendly class increase.” Beyond the category, there is a high possibility of being nominated in the main award category called ‘General Field’.” The list of nominees for the Grammys, which will be held early next year, will be announced on the morning of the 24th. The final winner will be determined by the results of the second round of voting, which runs for a month from the 6th of next month.

It is predicted that K-Pop’s popularity in the United States, which started with Psy’s ‘Gangnam Style’ in 2012, will gain even more momentum, along with BTS’s Best AMA Award. In fact, according to the Korea Customs Service, the number of countries exporting K-pop real albums has increased from 22 countries in 2015 to 88 countries as of August this year. It is expected to record a growth rate of more than 100% in Kim Jin-woo, senior research fellow at Gaon Chart, said, “In addition to BTS and Black Pink, K-pop’s growth in the global music market is expected to continue for some time due to the thick waist layer of K-pop such as Seventeen, NCT, and ATEEZ. Negative views that dismiss K-pop singers as ‘factory idols’ will gradually diminish.”

Park Jun-myeon “I met my husband and...