Even though Hwang Seon-Hong-Ho was eliminated in the quarterfinals, Cho Young-Wook, U-23 Asian Cup top scorer (overall) 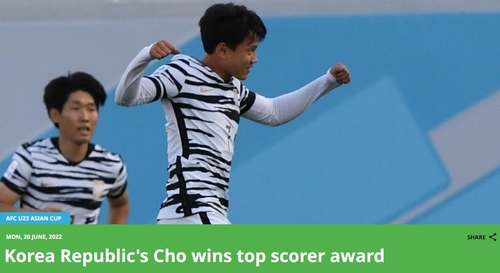 (Seoul = Yonhap News) Reporter Bae Jin-nam = Although Korea was eliminated in the quarterfinals of the 2022 Asian Football Federation (AFC) Under-23 (U-23) Asian Cup, striker Jo Young-wook (23, FC Seoul) rose to the top scorer of the tournament.

AFC announced on the 20th that Cho Young-wook was awarded the top scorer of the tournament.

Jo Young-wook recorded three goals and one assist in this tournament.

In the first group match against Malaysia (4-1 win), he scored two goals as a substitute in the 21st minute of the second half, and in the second leg (1-1 draw) with Vietnam, he was on the bench and entered the second half and scored the first goal.

In this tournament, there were five players including Cho Young-wook who scored three goals.

An official from the Korea Football Association said, “If the number of goals is the same, the AFC said that it selected the top scorer in this tournament by comparing the number of assists.”

The Korean national team, led by coach Hwang Seon-hong, tried to win the championship for the second time in a row, but lost to Japan 0-3 in the quarterfinals and had to pack up early.

After returning to his team, Cho Young-wook scored the winning goal in the K-League 1 ‘Super Match’ against rival Suwon Samsung held on the 19th to lead Seoul to a 1-0 victory.