It’s a price riot… Even civil servants protest in the rain, asking for a 7% increase in salary 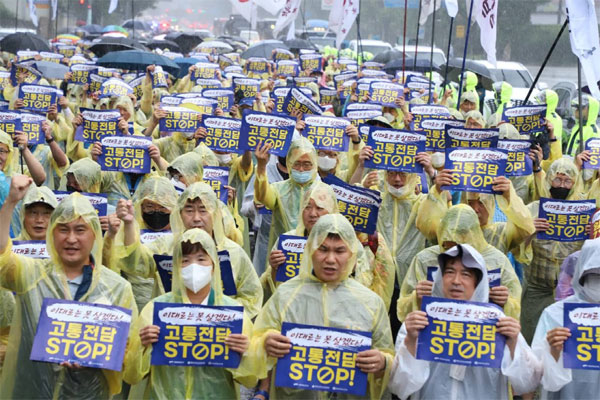 As inflation continues to rise day by day, labor demand for higher wages is in full swing. While the labor unions of major conglomerates have recently started wage and collective bargaining and demanded a wage increase, on the 23rd, the national civil servants’ union held a rally demanding that “salaries rise as prices rise.” The pressure to raise wages is emerging as another deterrent for the Korean economy in the second half of the year. As a result, the risk of a vicious cycle of ‘wage-driven inflation’ in which increased wages stimulate prices again increases.

On the 23rd, Jeon Jeon-no occupied three lanes on Hangang-daero in front of the presidential office in Yongsan-gu, Seoul and held a ‘Resolution Meeting to Call for Reinforcement of the Status of the Civil Service Remuneration Committee’. In the midst of heavy rain, according to estimates by the assembly, more than 1,000 union members attended.

The labor union demanded a 7.4% increase in civil servants’ wages in 2023, strengthening the status of the civil servant remuneration committee, opposing the conversion of public officials’ wages to the job and performance-based pay system, and increasing the fixed-rate meal and position subsidy expenses and improving the allowance system.

On the same day, Jeon Jeon drew attention by insisting that next year’s civil servants’ wages should be raised at once by a whopping 7.4%.

Read Also  Wen “We will not forget the April 3 Jeju spring… I hope the next government will continue its efforts.”

“The 7.4% increase may seem excessive, but it is just asking for an increase in the rate of inflation,” said a senior labor official. .

Kim Jae-hyeon, chairman of the youth committee, Jeon Jeon-no, who attended the rally that day, said, “I’m in my 10th year as a civil servant and I have a child, but my monthly salary is about 2.5 million won.”

In particular, Jeon Jeon-no argued that the Civil Service Remuneration Committee should be upgraded to a deliberation body under the Prime Minister’s Office. In the meantime, real wages have been declining, but they have not been able to speak properly because they are civil servants.

Currently, the Civil Service Remuneration Committee consists of 5 union representatives, including Jeon Jeon, 5 representatives from the government, and 5 experts recommended by both sides. . “The remuneration committee should be legislated under the Prime Minister’s Office, etc. and upgraded from an advisory body to a deliberation body to prevent the Ministry of Strategy and Finance from making additional cuts without permission,” said a senior labor official.